IRISH merchant seamen were sent to concentration camps because they refused to work for the Germans, newly-released letters show.

Files released at the National Archives in London reveal that 50 Irish men were captured at sea on British ships during World War II and sent to concentration camps.

Of those 50 Irish men only 28 survived the war.

The majority of the men were initially held at the Marlag und Milag Nord prisoner of war camp after being captured.

They were asked to help the German war effort by working on railways and shipyards in the cities of Bremen and Hamburg.

After they refused, 32 of the men were sent to the notorious Bremen-Farge concentration camp where prisoners were regularly worked or starved to death.

The newly released files show that the surviving Irish men were recognised for bravery after the war and given compensation by the British Government.

After returning home the men described in detail the “harsh" conditions in the camp, with food that was "atrocious in quality and quantity" as well as punishing 12-hour days of hard labour.

In one letter, Patrick O’Brien said: “Punishment was severe and meted out for the smallest of no demeanour.

“The reason for my imprisonment was my refusal to work on the German railway at Bremen and refusing to work on German ships at Hamburg.

“They claimed I was an Irish national and was therefore a free civilian, a claim which at no time I had ever made.”

“For refusing to work for the Germans I was sent to Farge SS Camp as a punishment and it was punishment place,” he said.

“I have seeing people being flogged to death and shot and was always afraid my turn would come one day. 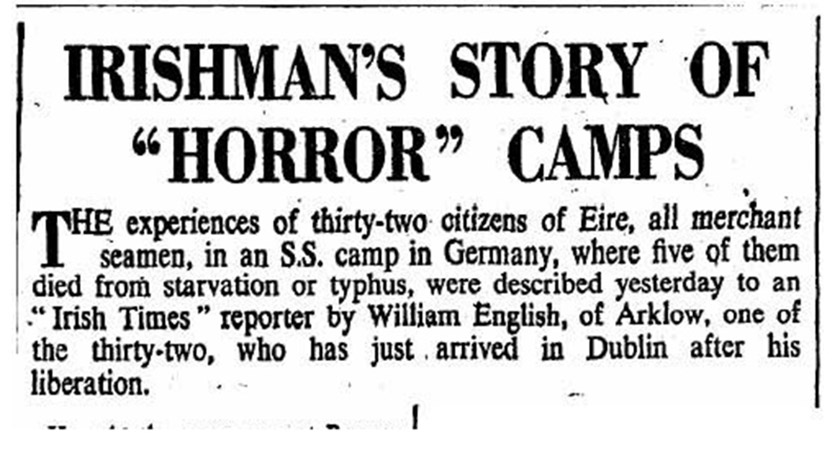 A May 17, 1945 article newspaper describing the horrors the men endured.

“Food was bad, accommodation very bad and there was syphilis in the camp and people were dying all over the place.

“However, I came through alright but I am crippled now with rheumatic.”

The letters describing the horrors the men suffered were in fact applications to the British Government for compensation.

The surviving Irish men were successful in their claim and were awarded between £1,000 and £2,400 each.

Mr Furlong wrote back to the British Government thanking them for their compensation, saying that it had helped him pay off his house.

He said: “I am a very happy man now as I have paid off the mortgage on my house and have a few pounds left over which will come in my handy.

"So let me thank you once again."

An account of the horrors the men witnessed in Germany appeared in an article in The Irish Times dated May 17, 1945 – two weeks after the end of the war.

The article revealed that the camp commandant – named Schauwecker – shot 16 prisoners just prior to the end of the war after saying he would “take as many as he could with him.”

It was also revealed that the men were regularly beaten by SS guards and told that, since they were civilians, they were not protected by the Geneva Convention, or the International Red Cross.

Their accommodation was a disused fuel tank buried beneath several metres of solid concrete.

The Irishman who recounted his story to the newspaper, William English, said that he had witnessed a number of atrocities at the camp.

One involved a naked Belgian prisoner being beaten to death with a rubber hose over an escape attempt, while another involved a Polish man having salt rubbed into a gunshot wound and beaten with an electric cable.

Mr English also revealed that a Russian prisoner who refused to work had muck forced down his throat with a wire before being beaten to death with a rifle butt.

One of the Irish men, Michael O’Brien of Limerick returned to mainland Europe after the war and testified against the Nazis in a special criminal court during the Nuremberg Trials.

His testimony was one of a number which lead to the conviction and subsequent execution of a number of top-ranking Nazi officials for war crimes.