AN IRISH whiskey set due to sell at an auction has an asking price of a whopping $2 million.

The rare, limited-edition set is a collaboration between the Craft Irish Whiskey Company and jewellers Fabergé, and includes multiple bottles of whiskey along with luxurious items from Fabergé.

'The Emerald Isle' collection, of which there are just seven in the world, includes a Fabergé Celtic egg with an uncut emerald from Zambia inside, a rose-gold timepiece and a carafe filled with local Irish spring water.

Of course, there is whiskey included in the collection, too-- two bottles of 30-year-old Irish whiskey distilled in 1991 with an ABV of 51.2% . 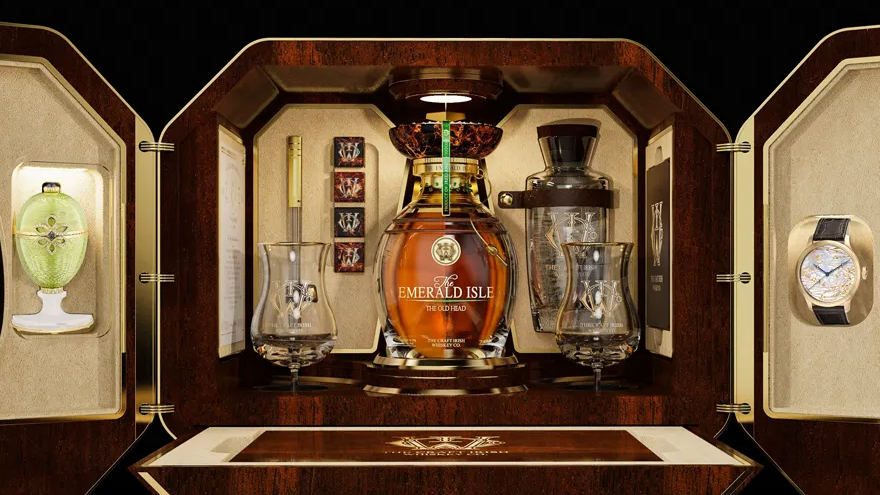 The $2 million starting price makes it the most expensive sale of an Irish whiskey in history, and the money from the sale of the Emerald Isle Collection will also all go to charity-- 50% to a sick children's charity and the other 50% to a charity of the buyers choice.

“This is a thrilling partnership for Fabergé, as it sees us continuing our legacy of creating unique and collectable objects, bridging the gap between historic legacy and modern-day heirlooms. Rare whiskey has seen tremendous investor attention, and the whiskey market is undergoing a dynamic evolution.

"It is very exciting for Fabergé to participate in such a cross-pollination of luxury sectors, thereby adding a dynamic twist on age-old traditions.”