IRISH people caught up in a mass shooting in Las Vegas which has left at least 50 people dead have described “sheer panic” as bullets rained down on a packed Country music concert.

Police have named Stephen Paddock as the gunman who opened fire on the Route 91 Harvest Festival from the 32nd floor of the Mandalay Bay Hotel at around 11pm last night.

The 64-year-old was later shot dead by armed SWAT officers and police say they have “located” a woman sought in connection with him.

Dubliner Christine O’Hanlon was at the nearby Aria Hotel when the mass shooting broke out on Las Vegas’ famous strip, leaving at least 50 dead and 200 injured.

Ms O’Hanlon told Newstalk there was mass “confusion” during the shooting and that she was not sure what was happening.

“All of a sudden there was a bit of a commotion and people started to run,” she said.

“At first, we weren’t really sure what was happening but I could hear popping sounds and obviously that was gunfire, but we didn’t realise it at the time.”

“Then people were running, it was like a stampede. We weren’t sure what was going on.”

Ms O’Hanlon said that she could hear gunfire as everyone in the casino took cover behind the tables.

“Because there was such confusion, no one knew what was happening. The reception area cleared out - people lay down on the floor. There was no alarm,” she said.

“One of the staff said it was unusual, normally an alarm would sound, that’s why they were confused as well. Because it happened so quickly. 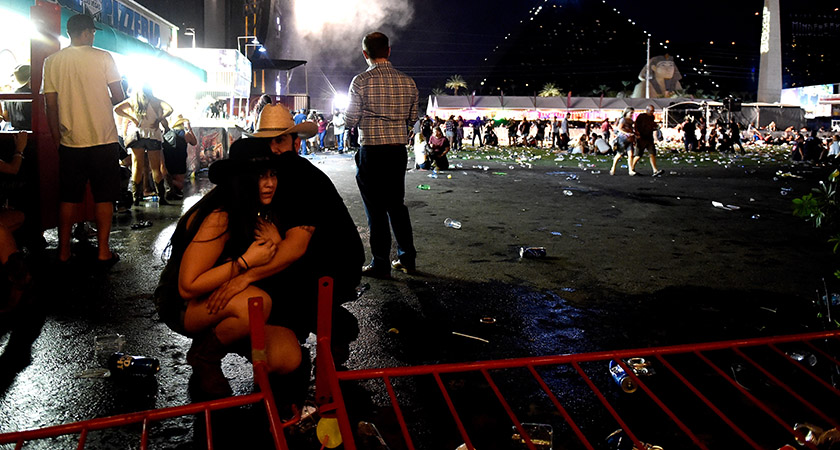 “We ran out to the front of the hotel, people were talking, said there was shooting at the Mandalay Bay hotel, which wasn’t too far from us because we could hear the gunfire.

“We thought then we have to get back inside. We managed to speak to one of the pit bosses, asked what’s going on, because the casino had cleared out quite a bit, but there were still people on the slot machines.

“We then went to security who recommended we go to our rooms.”

Ms O’Hanlon said she and other guests arecurrently on “lockdown” in their hotel rooms.

“People were unsure, we helped one little old lady to her room to her family, she was very shaken, her family were oblivious,” she said.

Dylan Walsh, 21, from north Dublin, said he was sitting outside nearby Planet Hollywood, where he is staying with friends, when the drama unfolded.

"We saw loads of ambulances going up the Strip and I looked at the lads said 'f**k that's a serious crash'. Little did we know at the time,” he told the Irish Independent.

He continued: "Then all the bars and restaurants start closing down.

"The next thing I know someone shouted 'gunman' near enough to us so we ran. Everyone scattered, casino chips and all still on the table.

"Waiters dropped everything. It was scary looking back now."

.@campaignforleo offers condolences to victims of Las Vegas shooting, says he's not aware of any Irish citizens caught up in attack. pic.twitter.com/ewkpkjJe4q

The Dubliner added that he is on lockdown and there are currently six people inside his room.

"I'm okay now but it is totally surreal."

With at least 50 people killed, the massacre in Las Vegas is officially the worst mass shooting in US history.

Irish Foreign Minister Simon Coveney said there is currently “no indication” of Irish casualties but added that it is still too early to know with certainty.

“This was a savage and brutal attack targeting innocent festival-goers,” Mr Coveney said.

“I wish to express my heartfelt condolences and those of the Irish people to the families of the victims, those who were injured and to the people and the authorities of the United States on this tragic day.

“As of now, we have no indications to suggest that any Irish citizens have been affected.  I am conscious, however, that it will take time before all of the casualties are identified.

“My Department, through our Consulate General in San Francisco and the Honorary Consulate in Las Vegas, is continuing to monitor the situation.”

He added: “Any families in Ireland who have concerns about relatives can contact the Department’s Consular Assistance Unit on 01 408 2527.”

Taoiseach Leo Varadkar also offered his condolences to the victims of the mass shooting, saying he was “horrified” to hear that at least 50 people had so far lost their lives.

“We very much extend our condolences and sympathies to the people affected and the American authorities, the Taoiseach said.

“As things stand we are not aware of any Irish casualties or injuries but our consulates in Las Vegas and San Francisco are keeping in touch to offer assistance.”