Joe McHugh: What Ireland's new government Minister of State for the Disapora is promising the Irish abroad

Taking over from inaugural incumbent Jimmy Deenihan in the Taoiseach’s Department, the Donegal North-East TD is now the voice of the Irish abroad in the Dáil.

With a salary and allowances of €121,000 as a Minister of State, we ask how the role - first introduced in 2014 - benefits the Irish in Britain and those around the world.

What does the Minister of State for the Diaspora do?

As Minister for the Diaspora my job is to represent the voice of our Irish communities worldwide in Government, to engage and communicate with our Irish people abroad and to seek to address the needs and challenges facing our Diaspora.

The main way I will do this is to ensure that the Government’s Diaspora policy – Global Irish – is fully implemented.

The Irish in Britain were overlooked in the recent Programme for Partnership in Government report so how will you be helping the Irish living abroad over the next five years?

Implementation of the Government’s Diaspora Policy, Global Irish, will remain a priority. We have already achieved a lot under this policy as we strive to create a vibrant, diverse global Irish community, connect to Ireland and to each other.

As Minister, I want to continue to be represent our Diaspora in Government and improve our communications with them.

To this end, my focus and the focus of my officials will continue to be on helping on Irish emigrants, particularly the most vulnerable of our people abroad, through the Emigrant Support Programme.

A total of 400 project proposals from over 230 organisations from around the world are currently been assessed with a view to allocating €11.5million under the programme for 2016.

There are a number of outstanding actions I wish to prioritise in the coming period, including the preparation of a report to Government on the legal, policy and practical implications of extending the vote to our citizens abroad in Presidential elections.

Also, in the Programme for Government we are committed to facilitating the return of 70,000 Irish emigrants. 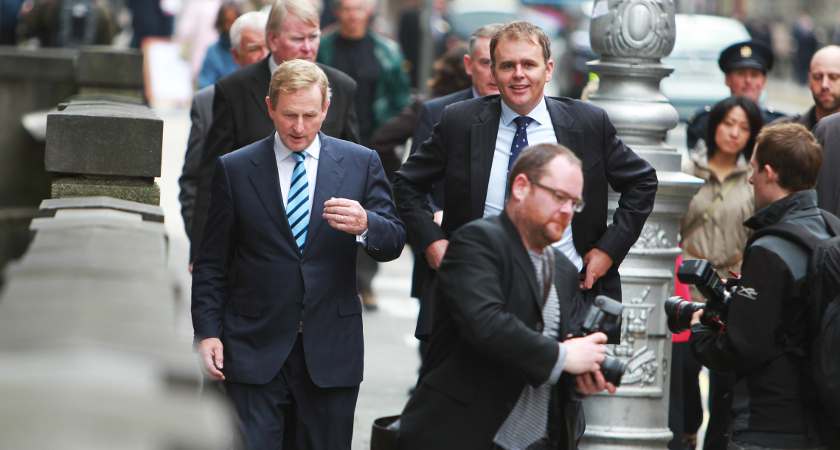 The first priority here is clearly job creation where the Government is making very good progress through our action plan for jobs. But I also want to look at the practical barriers to those wishing to return. I will convene a meeting of the Interdepartmental Committee for the Irish Abroad in the coming weeks to consider these issues.

I also want to see the establishment of an Alumni Challenge Fund to realise the enormous potential engaging with Irish graduates overseas as well as non-Irish students who retain an affinity for Ireland can offer to our third-level institutions and the country as a whole.

I would also like to advance our ambition of making Ireland a centre for Diaspora research. I think there are strong synergies between development and diaspora and as Minister for Overseas Development Assistance and the Diaspora, I am well placed to capitalise on these synergies.

Have you any plans to visit Britain?

The Irish community in Britain is central to my role and I am anxious to visit as early possible. I plan to do so in the coming weeks.

With regards to the endangered RTÉ longwave radio service – can anything be done to save it?

As you are aware a summary of the research undertaken by Middlesex University was recently published.

This research clearly highlights the importance of the RTÉ longwave service for the Irish community in the UK, and especially amongst its older members, in maintaining their links to Ireland.

We have gained a clearer picture of those who listen to longwave and of their particular needs.

While any decision on the future of longwave services in Britain is ultimately an operational matter for RTÉ, I hope that it will be informed by awareness of the role that the service plays in preserving and enhancing links with Ireland.

Armed with this research, I look forward to continue our work with the consultative group, which includes RTÉ and members of the Irish community, on finding the best way forward on this issue.

As you see it, what are the biggest challenges facing the Irish in Britain?

On June 23, one of the most talked about topics affecting our Diaspora will take place - the referendum in the UK on EU membership.

This is the biggest challenge facing both Ireland and our people who are resident in the UK.

Irish citizens over 18 years of age who are resident in the UK are entitled to vote. We are encouraging all citizens to participate.

The Irish Post has been reporting on how Tesco plans to reduce its Irish food and drink ranges from stores next month - what is your response to that?

I know that the Minister for Agriculture has spoken on this issue and I similarly think that consumers in Britain should be offered as wide a range of Irish produce as possible.

For many in the Diaspora particular products and brands have a special resonance. Companies that recognise that will do good business over time.

Can the Government guarantee the annual Emigrant Support Programme grants will continue at current rates and for how long?

Since its inception in 2004, approximately €130million has been disbursed to organisations working with Irish communities abroad.

The organisations funded range from those providing frontline welfare, information and advisory services to vulnerable Irish emigrants to community and heritage projects which strengthen links between Irish communities overseas and home and enable the Irish abroad to express and promote their cultural identity.

I am pleased that the budget allocation to support emigrant communities in 2016 remains the same as in 2015 at €11.595million.

Work is currently underway within the Irish Abroad Unit in the Department to assess applications for funding this year.

And finally, tell us something we probably don’t know about you?

I had my first flight in 1990 en route to working on building sites in London where I worked for an English company and was introduced to a 10am English breakfast, which covered lunch.

Minister of State for the Diaspora and Overseas Development Aid

• Minister of State at the Department of Arts, Heritage and Gaeltacht Affairs
• Minister of State at the Department of Communications, Energy and Natural Resources with Special Responsibility for Gaeltacht Affairs and Natural Resources
• Co-Chairperson of the British Irish Parliamentary Assembly in 2011
• Chairperson of the Joint Oireachtas Committee on the Implementation of the Good Friday Agreement in 2012
• Selected as Fine Gael’s Donegal North-East candidate for the 2007 general election.
• Served as Fine Gael Seanad Spokesperson on Community, Rural, Gaeltacht and Marine Affairs from 2002-2007
• Elected to Seanad Éireann in 2002

Before being elected, Joe McHugh was a geography and maths teacher at Loreto Convent in Letterkenny from 1993-1995.