The singer dedicated Live Forever to Hawkins, whose death was announced on Saturday.

Addressing the crowd in London, Gallagher said: "We dedicate this last song to the one and only Taylor fucking Hawkins, who sadly passed away."

He added: "This is for you, brother."

Gallagher then performed the Oasis hit against the backdrop of a huge picture of Hawkins.

On Twitter, the second-generation Irishman expressed his shock at the passing of the drummer, who was aged 50.

"Absolutely devastated to hear the sad news about Taylor Hawkins, my thoughts and prayers are with his family and friends RIP brother LG x," he wrote.

Hawkins died at a hotel in Bogota, Columbia, where the Foo Fighters were due to play this weekend.

The Bogota municipal government said an ambulance was sent on Friday night to the hotel where the band were staying, after a man had reported having chest pains. 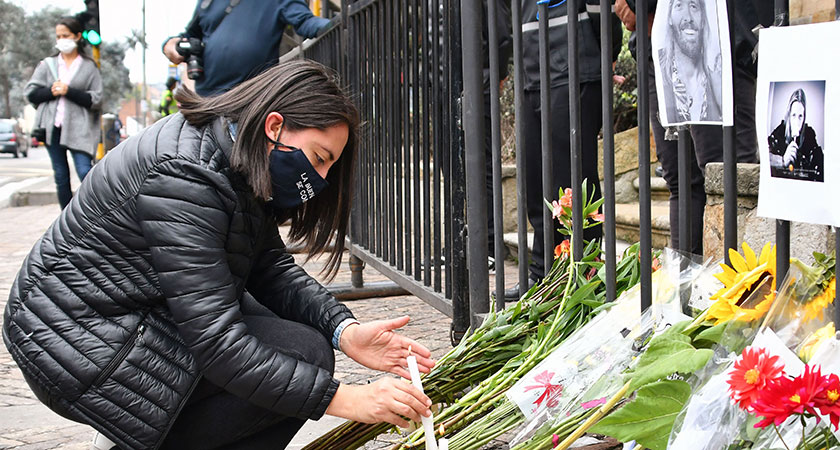 A fan lights a candle at a memorial outside of the Bogota hotel where Hawkins passed away (Image: DANIEL MUNOZ/AFP via Getty Images)

Paramedics were unable to revive the man and he was declared dead.

The BBC reports that toxicology tests revealed traces of 10 substances in Hawkins' body, including opioids, marijuana and antidepressants.

It added that the cause of death remains unknown and that investigators did not say if the mix of drugs was a factor.

'Changed the face of drumming''

Taylor had been a member of Foo Fighters since 1997, joining ahead of the release of the band's second album as a replacement for the departed William Goldsmith.

Announcing his death on Saturday, the band said: "His musical spirit and infectious laughter will live on with all of us forever.

"Our hearts go out to his wife, children and family, and we ask that their privacy be treated with the utmost respect in this unimaginably difficult time."

Co. Down rockers Ash were among the acts to pay tribute to Hawkins, saying he 'changed the face of drumming'.

"Taylor was just an absolute ball of love and energy the few times we were lucky to meet him," they wrote on Twitter.

"His personality is written all over his playing. He lived for it every minute and changed the face of drumming for two decades.

"One of the finest musicians and humans I'll ever meet."

Seattle band Pearl Jam said Hawkins 'brought so much joy to the world of music', while Ozzy Osbourne described him as 'a great person and an amazing musician'.

“Long live Taylor Hawkins. He enriched my life as a dear friend & fellow musician. He brought so much joy to the world of music, he will be forever missed. Our deepest condolences to Alison, Shane, Annabelle & Everleigh Hawkins & the entire Foo Fighters family.”
📸: Ross Halfin pic.twitter.com/ZsnqmjmPaW

. @TaylorHawkins was truly a great person and an amazing musician. My heart, my love and my condolences go out to his wife, his children, his family, his band and his fans. See you on the other side - Ozzy

So incredibly sad to hear of the passing of Taylor Hawkins. My thoughts are with his family and the band at this time. pic.twitter.com/wueydCu5gw

Shocked n’ saddened to hear of the passing of Taylor Hawkins.He was a really great guy, drummer n’ family man. Was always great to see him!Was looking forward to seeing him n’ everyone in Daytona.Truly saddened. My deepest condolences to his family, the Foo Fighters n’their fans.

A rock and roll brother has gone home too soon. My deepest condolences to his family, Dave Grohl, and the @FooFighters. Taylor played from the heart with power and joy. May he Rest In Peace. #TaylorHawkins pic.twitter.com/YcDrEfUzpF

We are terribly sorry to learn of the loss of our friend and musical brother Taylor Hawkins. So sorry to his family, Dave and the Foo family, and to the legions of his fans. Like everyone who knew him, we loved him. Rock Music wont be the same without him. pic.twitter.com/MXE5yGmy2O