EVER SINCE arriving on the scene back in the ‘90s, Dropkick Murphys have brought something special and undeniably Irish to the punk music scene.

Originally formed back in Quincy, Massachusetts, an intoxicating rebel spirit runs through each of the band’s nine studio albums to date.

It’s a spirit that has seen them garner fans the world over, with their live shows ranked among the most enjoyably raucous in music today.

The good news is that the Dropkick Murphys are showing no signs of slowing down either if their new single “Smash Shit Up” is anything to go by.

Even better still, the band has just kicked off a major European Winter Tour that concludes with a barnstorming show at London’s Alexandra Palace.

Ahead of the tour, and with a new album on the way, The Irish Post caught up with drummer Matt Kelly to talk about big breaks, American politics and the band’s cherished Irish heritage.

Irish Post: Dropkick Murphys are popular among Irish folk – how does that make you feel?

Matt: I feel lucky that anybody cares to come see the band. We’re fortunate that we’ve duped countless folk into thinking that we’re worth listening to!!!

Irish Post: Can you tell us a little bit about your Irish heritage?

Matt: Well I’m a Kelly, so that’s obviously Italian… Nah, anyways, my great-great grandpappy came over here from Kilmichael, Co. Cork, and never turned back. Apparently he was a Vaudeville fiddler and a soft-shoe dancer of some repute. Subsequently, corned beef, dark stout, talk of the famine, the Father, Son, and Holy Spirit have all featured prominently in the home.

Matt: It’s the wellspring of a major part of my familial heritage, and they stock Club Orange and Buckfast so they can’t be all that bad.

Irish Post:In what ways does your Irish-American heritage inform your music?

Matt: I guess the sense of history, the family stories, the misery…

Irish Post: Do you have any family living in Ireland right now?

Matt: Yeah, I met some cousins when I visited the grand, bustling metropolis that is Kilmichael, about twenty-five years ago; my cousin Paul Kelly and his family are beekeepers in that area of Cork County as well. Aside from that, Hell, Kelly’s a bit of a rare old name so that might be the extent of it.

Irish Post: Your St Patrick’s Day shows in Boston are the stuff of legend – what is it about those gigs that makes them so special for you and your fans?

Matt: It’s the focusing of the energy, excitement, intensity, and inebriation of our respective family members, as well as all our friends we hear from once a year to bug us for tickets for their fathers’ cousins’ former roommates(they’re big fans, don’t ya know)… Seriously though, a lot of people buy tickets for multiple nights, so you end up seeing the same faces night after night, and sometimes year after year… so there’s sort of a “we’re all in this together” feeling in the room. Yeah, it’s pretty special and I’m damned thankful for those annoying bastards!

Irish Post: What is it about St Patrick’s Day that makes it the best of all the days celebrating the patron saints?

Matt: It’s the one day in Lent I can have a few drinks… from midnight the night before till midnight on the 17th… and people can embarrass themselves and pretend they’re Irish for a day.

Irish Post:You’re a band known for supporting unions and working class causes. How do you feel about the current state of America under President Trump?

Matt: Employment is up, so that’s good… and that’s about it… screw him and his opponents on the other side of the aisle. They’re like a bunch of quarrelling children. Embarrassing. 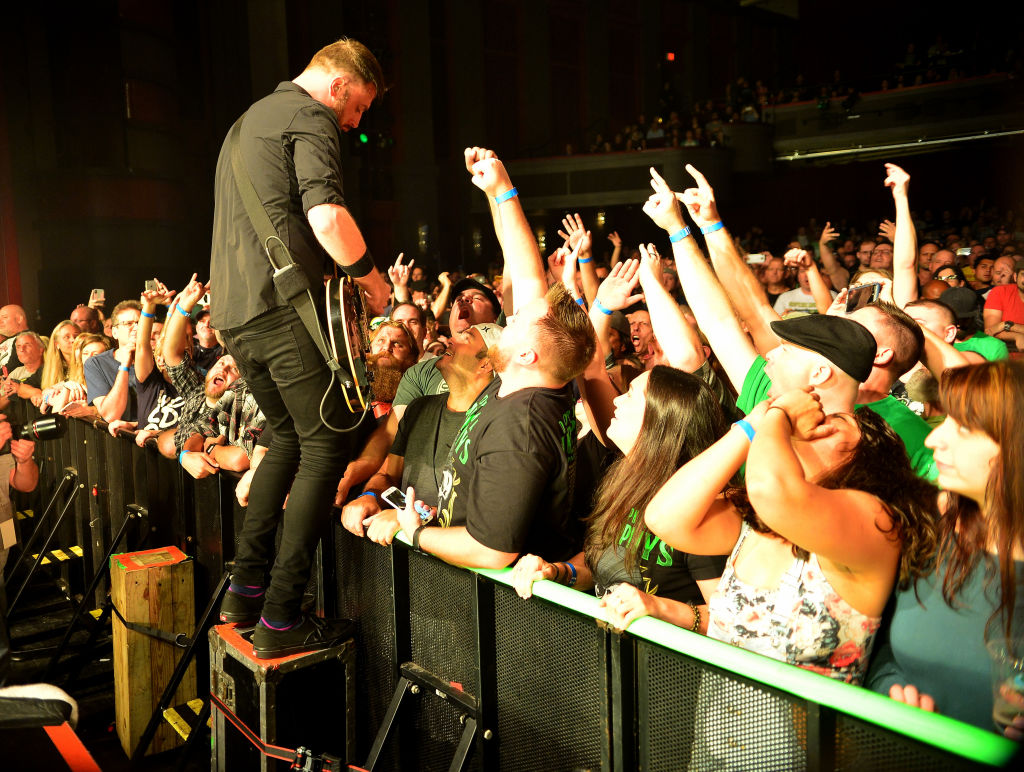 Irish Post: Do you get much of a chance to visit Ireland? Do you have any favourite places to visit?

Matt: Now and again, I guess. The family and I are planning on a trip there soon. I really dig Doolin, the Cliffs of Moher and the Ring of Kerry. Beautiful country!

Irish Post: What advice could you offer to any bands out there trying to make it?

Matt: Be yourself; practice a lot; have a setlist; don’t play too long; don’t wear winter hats onstage unless it’s cold(you look like a plonker!). Oh, and USE YOUR MUTE BUTTON WHILE YOU TUNE UP!

Irish Post: What's the craziest/most rock'n'roll thing to ever happen to the Dropkick Murphys?

Matt: We’ve had a couple of brassieres thrown onstage in our time…

Irish Post: When did you first realise you had ‘made it’?

Matt: That’s tough to say. It was all sort of a gradual thing that built one thing on another. It’s always been “keep your nose to the grindstone, the roses will be there later” in our camp.

Irish Post:“I’m Shipping To Boston” was obviously a massive hit for you – did you ever have any inkling that the song would be as big as it was?

Matt: No. The first time we ever played it live, it went over like a lead balloon… then we said, “well, it looks like we’ll never play THAT one again...”

Irish Post: A lot of people will remember that song for featuring in The Departed – how did it end up featuring in the film?

Matt: Either Martin Scorsese, Robbie Robertson, or that other dude liked it and suggested it be put in the film. We saw it at the premier of the movie— we’d just stepped off the plane from a month-long European tour and were jet lagged to hell, and I remember my wife and I sitting adjacent to James and his girlfriend at the time. When the song came on, we both sort of looked at each other with the expression, “Huh?” on our mugs, and both thought it seemed forced and out-of-place. Upon second viewing a few months later, it sank in and I was pretty psyched about it.

Irish Post:Your last album, 11 Short Stories of Pain & Glory, came out in 2017. When it your next record coming and what can fans expect?

Matt: As soon as possible. The fans will have heard some new stuff played live on the last couple tours. WATCH THIS SPACE!

Dropkick Murphys new single Smash Shit Up is out now. A brand new studio album will arrive this Autumn.

Tickets for their European tour can be purchased here.