The man was found to be driving under the influence, and had an open can of Guinness in the car (An Garda Síochána)

A MOTORST has been arrested and their vehicle was seized after Gardaí found them to be driving under the influence.

The driver was stopped by Gardaí in Blanchardstown, Dublin yesterday morning, 11 May when unusual driving led Gardaí to suspect the motorist may have been under the influence of alcohol.

When stopped, Gardaí made routine checks and found the motorist did not have a license, tax or insurance-- however they were in possession of an open can of Guinness, which was discovered tucked into the pocket of the car door. 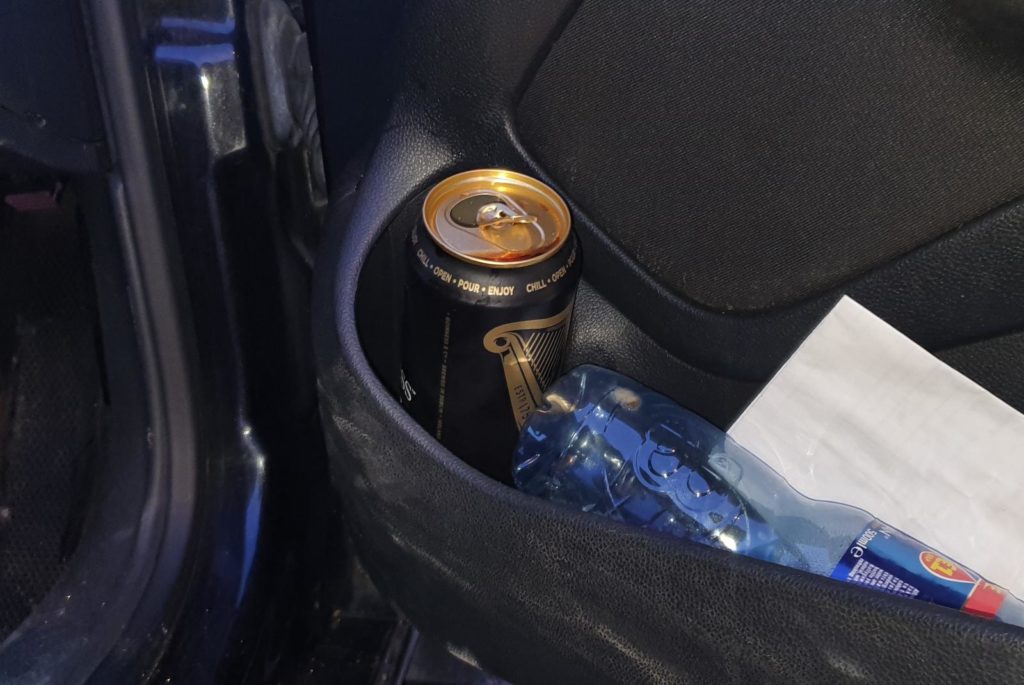 The motorist was found to be driving under the influence, and had an open can of Guinness in the car (An Garda Síochána)

The driver was arrested at the scene under suspicion of drink driving, with Gardaí saying court proceedings are set to follow.

In a statement, Gardaí said:

"DMR RPU stopped this car this morning in Blanchardstown.

"Driver had no Licence/ Tax or Insurance. Driver arrested on suspicion of drink driving. Car seized & proceedings to follow."

The Gardaí signed off reminding everyone to "never ever drink and drive".

There has been a rise in reported traffic offences over the last number of weeks, in part due to regular Garda patrols and checkpoints uncovering offences other than breaches of coronavirus guidelines.

Less cars on the road due to social distancing measures has also led some motorists to drive dangerously.

Gardaí stopped & impounded this van in Cashel this morning after our #MobilityApp indicated that it had never been taxed (10 years). The driver was a learner & driving unaccompanied. Discs displayed were from another vehicle. Court to follow.#StayAtHome pic.twitter.com/BjCggGda0i

Earlier today, 12 May, Gardaí stopped a van after their 'Mobility App' alerted them to the fact it had never been taxed, despite being registered for ten years.

A Garda report states that the person behind the wheel was an unaccompanied learner driver and the discs displayed were from a different vehicle.

Gardaí confirmed that court proceedings would follow and reminded everyone to stay home unless absolutely necessary.