Oliver Cromwell sinks in Irish Sea on way to Ireland

OLIVER CROMWELL has sunk in the Irish Sea en route to Ireland.

At least, a vessel bearing his name has, after it got into trouble while being towed to Coleraine from Gloucester.

When Holyhead RNLI volunteers arrived on the scene at 3pm, the vessel was beginning to sink from the bow. 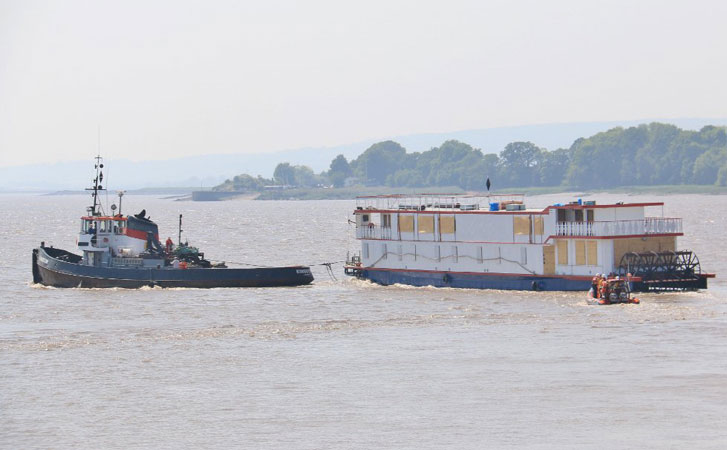 The MV Oliver Cromwell got into difficulty while being towed to Ireland (Image: Mike Nash)

With no one on board and the vessel containing no fuel, it was decided the situation was too dangerous to try and put any RNLI crew on board.

At 4.20pm, the Cromwell sank completely into the 50-metre deep waters.

Holyhead coxswain Tony Price said: "It was very sad to see such a lovely vessel sink like that, but fortunately no one was endangered and the lack of fuel on board meant there were no environmental issues."

The Mississippi-style paddle steamer, which doubled as a hotel, restaurant and cabaret venue, was being towed to Coleraine after being bought by a new owner.

A clip from the last footage taken of the Oliver Cromwell leaving Sharpness. pic.twitter.com/moIfeIMUJ8

Originally built as a Dutch Barge in 1922, it was converted into its current format in 1993.

It provided full-board river cruise holidays between Worcester and Gloucester but had been moored in Gloucester in recent years.

The vessel left Sharpness port in Gloucester on Wednesday after being spruced up ahead of its relocation to the River Bann.

The vessel’s namesake, Oliver Cromwell, led a brutal military campaign in Ireland between 1649 and 1653 that resulted in the loss of thousands of lives.

‘Cromwell is a cockroach’ - Oliver Cromwell statue vandalised in Manchester