AN Irishman who was left in an orphanage in Ireland aged two, is one step closer to finding out where he came from.

Joseph Guilfoyle has lived in London for over three decades, and has a wife, two daughters and four grandchildren, all living here in England. Yet he knows very little about his own past in Ireland.

Mr Guilfoyle, who has described feeling like a "lost child", was given up by his mother Bridget Guilfoyle, now deceased, as a baby.

He grew up in a strict boys' school and then moved to England in search of a brighter future as a teenager.

Since becoming a grandfather he has wanted more than ever to find out more about his tragic past.

After Mr Guilfoyle's daughter Julie contacted The Irish Post, the story of his search has been read and shared thousands of times.

Then, this week a breakthrough happened when a reader named Margaret Geaney from Nenagh provided new information about Mr Guilfoyle's family.

Mrs Geaney was a neighbour of the Guilfoyle family growing up and remembers Mr Guilfoyle's grandmother Nora and his mother Bridget or Bridie. She thinks Bridget may have been pressured to give up her second son because they were struggling to make ends meet.

Mrs Geaney believes Joseph has an older brother named Mick Guilfoyle who would be about 77 years old.

Retired priest Father Enda Bourke, an old friend of Mick Guilfoyle says he recalls him moving to England but hasn't seen his childhood friend in decades.

Joseph is said to be "shocked but delighted" following the discovery that he may have an older brother living in Britain.

Mr Guilfoyle's daughter Tracey Sweetland told The Irish Post: "We are still amazed how many shares dad's story has had plus lots of lovely comments.

"He is starting to have hope that he belongs in a family on his side even if only in paper."

If Joseph Guilfoyle's brother Michael (or Mick/Mike) was alive today he would be about 77 years old.

His mother's name is Bridget Guilfoyle and she married a man named Patrick Delahunty in Bilston, Strafford in 1958.

On their marriage certificate, Bridget Guilfoyle is listed as a 'spinster'. 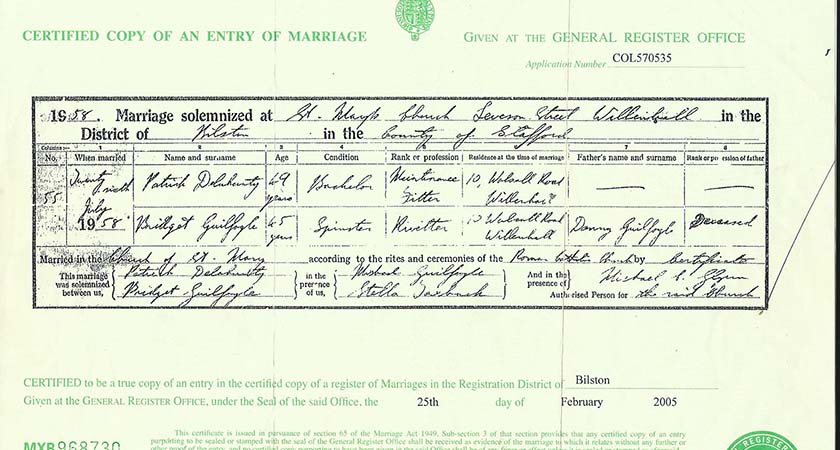