A PETITION calling for the seal to be lifted on the archive testimony of survivors from Ireland’s Mother and Baby Homes has amassed more than 160,000 signatures in less than a week.

The adoptees’ rights group Aitheantas put the petition together last Friday after coalition TDs backed new legislation that will see the records sealed for thirty years.

Opposition TDs and survivors were among those calling for for amendments to the Mother and Baby Homes Bill.

Under the plans outlined in the bill, any records not passed on to the child and family agency, Tusla, for use in its database will be sealed for the next 30 years.

Opposition TDs had called on survivors to be given the option to decide whether their names or testimony should be disclosed.

The proposed amendment was refused with the bill eventually passing by 78 votes to 67.

Children’s Minister Roderic O’Gorman has defend the bill, arguing that the advice he received from the Attorney General was that access to the records was explicitly restricted by the Commissions of Investigation Act 2004.

However, a source inside the Data Protection Commission told the Irish Examiner that was, in fact, incorrect.

They claimed the government was told, prior to voting on the bill, the 2018 Data Protection Act explicitly amended the 2004 Commissions of Investigation Act.

This was put in place to ensure any restriction on the right to access personal data processed by the Commission is implemented to the extent necessary and proportionate to safeguard the effective operation of commissions and the further cooperation of any witnesses.

At the time of writing the Repeal the Seal, Open the Archive petition has amassed 161,444 signatures. 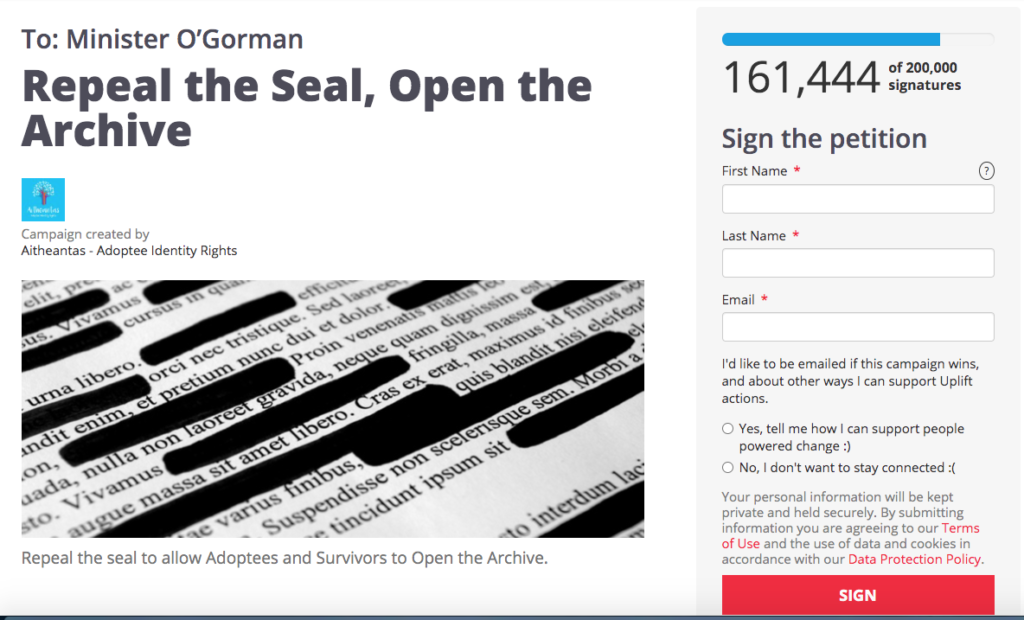 The petition’s aim is simply to "repeal the seal to allow Adoptees and Survivors to Open the Archive".

"For the first time the Irish people can see for themselves the callousness with which the Irish State has treated Women and Children & survivors who came through Mother and Baby Homes, Baby Homes, industrial schools who are denied access to their own testimony, files and records - this needs to stop."

Aitheantas founder Maree Ryan-O’Brien has spoken out in opposition of the archive plans.

“An archive at this juncture only further objectifies adoptees, birth parents and survivors as a subject matter of the same, as being a commodity in terms of the value of the information in our files. Paper not people, without any provision for any other much needed and long absent supports.

“The history of this issue is one of ongoing loss, disenfranchisement and absence of consent. It is therefore of paramount importance that whatever the pathways forward identified by stakeholders in conjunction with the Minister and his Department are agreed by all stakeholders and with the involvement of all stakeholders.”

“If records can be legislatively sealed then provision can equally be made to have them legislatively unsealed and we would ask that the Minister make this concession for those who do not wish to have their records or testimony sealed.”

She added: “This is our history, our lived experience and we would respectfully request that it is stakeholders and those directly affected by these issues who are allowed now to lead how it proceeds.”

Anyone wishing to sign the petition can do so here.