THE YOUNGEST designer to present a garden at the Chelsea Flower Show has won a silver medal for his ‘stargazing’ offering sponsored by Bord Na Móna.

David Rich, 23, and his brother Harry, 26, are the pair behind The Vital Earth: The Night Sky Garden, which is supported by the Irish horticultural organisation in this week’s green-fingered showcase.

The garden, situated along the show's main avenue, was inspired by the dark skies of the Brecon Beacons, close to where the brothers were raised.

They claim it offers a ‘sensory’ experience for visitors.

"In this garden the darkness is equally as important as the light,” Harry explained.

"We have been very much inspired by the dark skies of Brecon Beacons National Park and we hope to capture the imagination of those who visit the garden.” 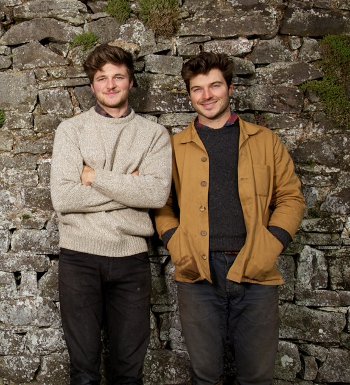 Inside its perimeter, a modest seating space combines with a range of different sized protruding boulders to resemble fallen meteors.

It includes something for the adult and child visitor alike, according to the designer duo.

"The garden is a wonderful platform to raise awareness about light pollution but it's also based on a sensory garden that we recently designed for autistic children,” Harry explains.

"It offers a naturalistic, calm environment where children can learn about both the landscape around them and the wonders of the night sky,” he added.

The brothers from Brecon, who claim they included two reflection pools in the showpiece to resemble ‘black holes’ or dead stars, are in Chelsea for the second consecutive year, after securing a gold medal for their Artisan garden in 2013.

Sponsors Bord na Móna were delighted with their offering for the 2014 show - organised annually by Britain’s Royal Horticultural Society.

BNM spokesperson Steve Harper said: “Harry and David are a young team with real talent who specialise in interpreting their native landscape, using environmentally kind materials and sympathetic planting.  These are exactly the values that our peat-free brand Vital Earth seeks to espouse and if a brand like this can help designers like this to succeed at Chelsea yet again, then we are just delighted.”

Bord na Móna is the semi-state company responsible for the mechanized harvesting of peat in Ireland, largely undertaken in the boglands of the midlands, and drives environmentally friendly strategies within the industry.

Vital Earth: The Night Sky Garden can be seen at the Chelsea Flower Show, at London’s Royal Hospital until Saturday, May 24, when the show closes.

It will then be relocated to Beechwood College in Cardiff.

Giant cranes returning to Ireland for first time in 300 years