A STRAY goat has been on the run for over three weeks in Mayo.

The goat, who has been nicknamed Houdini on account of an impressive ability to escape capture, has been spotted at several locations across Kiltimagh town.

However, it has so far managed to avoid captivity, despite a few close shaves.

Houdini first earned his moniker after being caught and temporarily penned away in a field.

In a flash, however, he was back on the lamb having found a way out of his confinement.

Volunteers from the Mayo Society for the Prevention of Cruelty to Animals have been hot on the roaming ewe’s tail ever since.

In a fresh development, Houdini was spotted strutting his stuff around town on Sunday afternoon.

Once again, though, he managed to evade capture.

It’s a frustrating situation for local volunteers, who are only trying to provide the adventurous goat with food and accommodation at a nearby rescue centre.

Emma Semple told the Irish Sun the situation was proving “very, very frustrating” for everyone helping out from Furry Friends Animal Rescue in Charlestown.

"We've been after this goat for about three and a half weeks now. As soon as anybody gets there to catch her, she's disappeared again,"” she said.

"The other day we were very close to getting the goat actually and the Mayo SPCA volunteer went there and said the bloody goat's disappeared again! Where she's hiding now, I don't know.

"We have another little goat that needs a friend here at the rescue so we are quite keen on getting a hold of it." 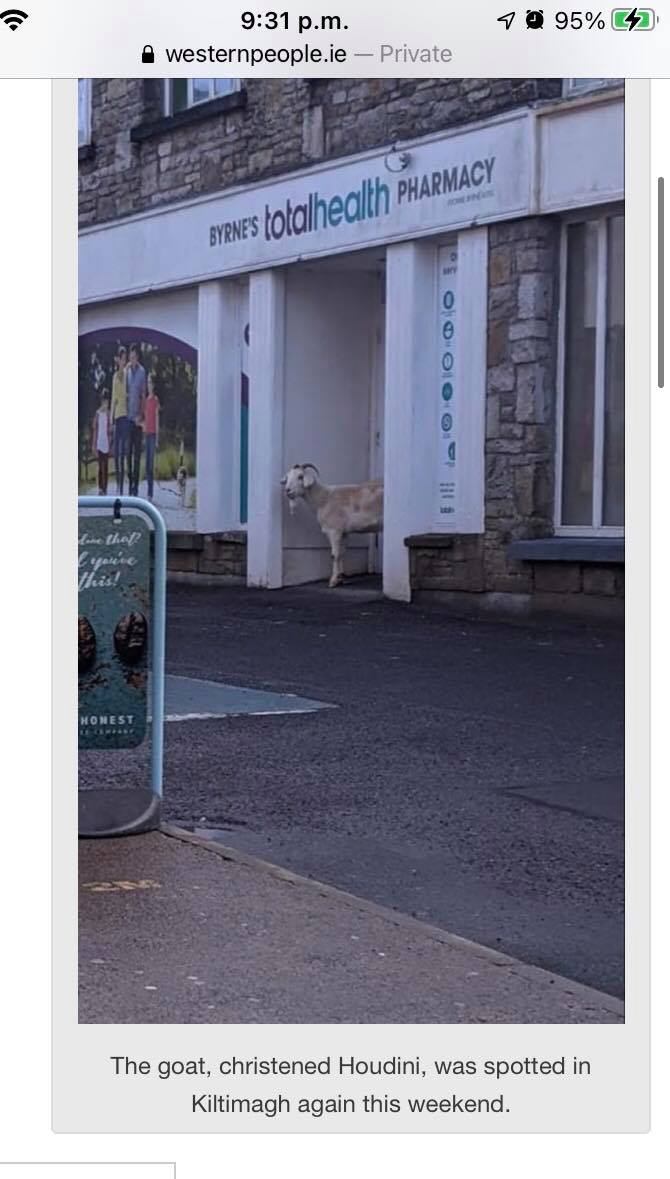 Houdini has been spotted up a nearby mountain close to some wind turnbines, according  to the Western People.

While Byrne's Totalhealth Pharmacy, also shared a picture of the goat stood in the doorway of one of its shops.

They wrote on social media: "We love all of our customers, but unfortunately we aren’t open on a Sunday Houdini!"

Furry Friends Animal Rescue in Charlestown is now calling on locals to play their part in bringing the gallivanting goat in.

If anyone happens to see Houdini out on their travels or from the comfort of home during lockdown the advice is simple: tether the goat to something and call the authorities.

While the idea of a goat evading the authorities is fun and games now, Emma is warning that the situation is quickly becoming “quite urgent”.

Semple urged locals to tether the goat or get it into a garden so that it can be rescued as "it is getting quite urgent".

"It is emaciated, very, very thin and could go into organ failure soon if it's not helped because it's so underweight,” she said.