TRIBUTES have been paid after Tipperary hurler Dillon Quirke passed away after becoming ill during a game on Friday.

The 24-year-old Clonoulty-Rossmore clubman collapsed during the first half of his side's Senior Hurling Championship match with Kilruane MacDonaghs at Semple Stadium.

He was treated on the pitch before being taken to Tipperary University Hospital, where he passed away.

In a statement, Tipperary GAA offered their condolences to Quirke's family.

"Tipperary GAA extends its heartfelt and sincere sympathies to Dan, Hazel, Shannon, Kellie and the extended Quirke family," it read.

"Dillon became ill during Friday evening's County Senior Hurling Championship game between Clonoulty-Rossmore and Kilruane MacDonaghs in Semple Stadium and was taken to Tipperary University Hospital in Clonmel where he passed away.

"Tipperary GAA wish to thank all those who attended to Dillon in Semple Stadium and in Tipperary University Hospital this evening."

The statement added that all County Hurling Championship matches scheduled for this weekend had been postponed as a mark of respect.

Clonoulty-Rossmore, where Dillon was club captain, held a vigil in his memory on Saturday night.

"Thank you for all the kind messages," the club added in a statement.

"Maybe in time, these will provide some comfort.

"For now, we are beyond despair."

Meanwhile, President of Ireland, Michael D Higgins, was among those to offer his condolences over Quirke's sudden passing.

"As President of Ireland, I wish to express my deepest sympathies on the passing of Dillon Quirke," he said.

"This is an inestimable loss not only to his family and friends but to his entire community to which he was making such a contribution.

Impossible to get one's head around the tragedy this evening in Tipperary. RIP Dillon Quirke.
Lovely lad who I interviewed after he scored 0-4 v Waterford in 2020 league, when he said: “I waited all my life for this, it’s a dream come true." Taken too soon.

Quirke made his senior Tipperary debut in 2020 against Limerick in the National League, with his Championship following later that year as a substitute in a qualifier against Cork.

He soon established himself in the Senior panel and started all four of Tipperary's Championship games this year.

GAA President Larry McCarthy said Quirke, who won Minor and Under-21 All-Ireland honours with Tipperary hurlers, had made his mark on the game. 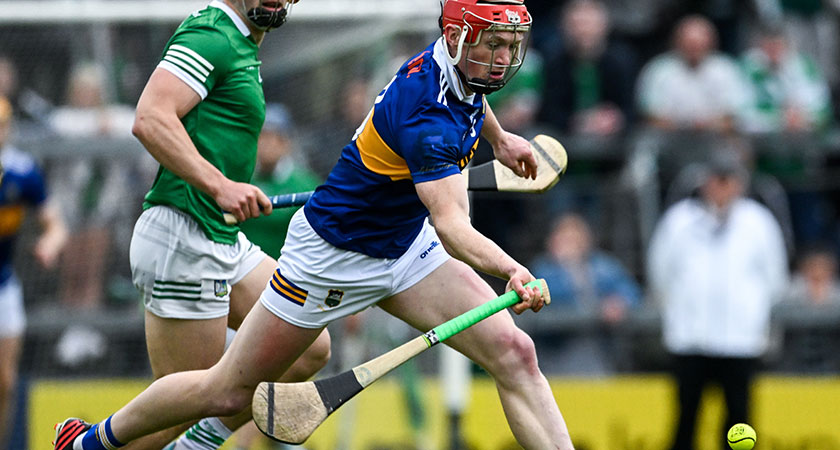 Quirke playing for Tipperary against Limerick in this year's Munster SHC in May (Image: Ray McManus/Sportsfile via Getty Images)

"There is a huge sense of shock across the GAA Community at the tragic loss of Dillon who had already achieved so much in his young life," he said.

"He was a young man in his prime with so much potential and promise and on behalf of the GAA family I would like to extend my sympathies to Dillon's father and mother, Dan and Hazel, and his sisters, Shannon and Kellie, at what is an unimaginably difficult time."

Meanwhile, the Gaelic Players Assocation added: "The family, friends & teammates of Dillon Quirke are foremost in the thoughts of players across Ireland.

"We can't imagine your pain but will walk with you & support you in any way we can.

"Rest easy Dillon. We mourn your loss & celebrate your life. You will stay forever young."

Quirke’s funeral will take place on Tuesday at noon in St John the Baptist Church, Clonoulty.

All involved with Limerick GAA send our deepest condolences to the family, friends and clubmates of the late Dillon Quirke. Taken far too young playing the game that he loved.

A minutes silence will take place at all Cork GAA County Championship games this weekend as a mark of respect on the passing of Tipperary senior hurler, Dillon Quirke. https://t.co/2NJRIv1t0K pic.twitter.com/27qlw6CKDx

As a mark of respect we ask that all clubs and grounds in Clare fly flags at half mast this weekend. Ar dheis Dé go raibh a anam dílis. pic.twitter.com/iqHbd8D8j8

Following last nights tragic events in @TipperaryGAA & as a mark of respect to Dillon Quirke there will be a minutes silence before all games in Kilkenny today.We extend our sympathies to the Quirke family,all in @ClonRossGAA & @TipperaryGAA Ar dheis Dé go raibh a h'anam dílis

Our thoughts are with everyone in @ClonRossGAA and @TipperaryGAA. A devastating loss for Dillon Quirke's family, friends and the GAA community. Ar dheis Dé go raibh a anam dílis. pic.twitter.com/KcoFKZXB3D