A WOMAN in the US has become the laughing stock of the internet after revealing she has spent the past few days mistakenly washing her hands with a block of cheese, rather than a bar of soap.

Miley from Vancouver, Washington thought she was doing her bit to stop the spread of coronavirus by thoroughly washing her hands with a bar of soap.

Unfortunately, she instead succeeded in spreading some rather mature looking cheddar on her hands over the course of several days.

Sharing her sorry tale on Reddit, Miley explained how the cheese ended up being mistaken for a bit of soap after it was left out of the fridge following a drunken late night snack.

Waking the next morning, she assumed that the lump was the remnants of a bar of soap. She also was keen to stress that she does actually keep a bar of yellow, unscented soap nearby for such use with the two evidently getting mixed up.

"Just realised my soap wasn’t working because it’s literally a block of cheese,” she wrote.

“I use a liquid soap for the dishes, bar soap like this is gentler on my hands after I do chores if that makes any sense [sic].”

“It was a couple days of 'Why isn’t this foaming?!'

"I come to realise it was a dried-out square of Tillamook sharp cheddar cheese.

“I suspect I left it out when I was intoxicated and just forgot.” 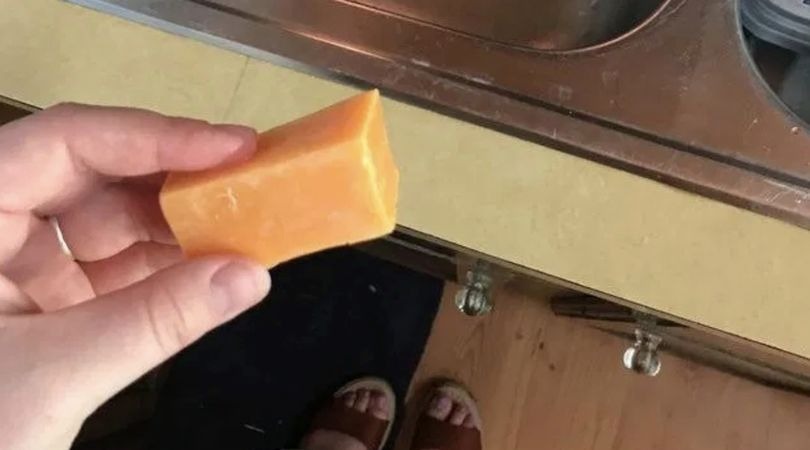 People were quick to comment on the major handwashing mishap and the most obvious question.

One asked “But that must mean...... have we been eating Mac&Soap the entire week??”

A second echoed those concerns: “Does that mean you put the soap in the fridge?”

While a third said: “To be fair to you it does look like a block of soap.”