Does anybody believe they can beat Dublin?

WHATEVER achievements await them in primrose and blue, the Roscommon under-21s will always look back on Saturday’s All-Ireland final with profound regret.

There is no other conclusion to arrive at from a match that at one point bore the incredible score of 1-17 to 0-1. One cannot now argue that Roscommon had much chance of beating Dublin but no team should slip to such depths, let alone one that had hammered a promising Mayo outfit and were the deserving masters of a fine Cork team in the semi-final.

The debate now is whether Dublin have simply been blessed with a couple of generations of brilliant footballers, or their dominance is a portent of things to come, now that football in the capital is so popular and well-resourced.

It is too soon to tell, although we would suggest that a team that takes a 19-point lead in a final without their best player, powered by an awesome full-forward line, two of whom are underage at this grade next year, is something extraordinary.

In that context Roscommon might at least take comfort from the obvious truth that they will not be the last team to suffer humiliation against Dublin in a big game. Hell, they are not even the first; Kildare last year and Cork this year were guilty of similarly abject surrenders at senior level, both in the semi-finals of prestigious competitions.

There is a very strong likelihood that Dublin will win Sam Maguire this September for the third time in four years.

That is not the same as saying they are unbeatable; indeed, it is the responsibility of every serious football team that meets them this summer to stretch themselves and maybe even the rules to the limit in an attempt to do the same to the Dubs, for championships must be earned. 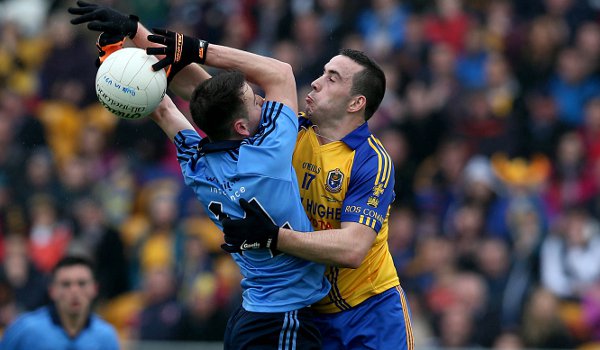 That was what was so disappointing about Tullamore on Saturday, about Kildare last year, about Cork and Derry this year. All those teams, cowed by a lack of self-belief, varying degrees of tactical naivety and too little defiance, offered no test.

In approaching the problem of how to beat Dublin, it might be instructive to look at what all those teams, and particularly Roscommon, did not do.

Whether it was a lack of work-rate, a case of freezing on the day, a misguided game plan, or all three, the Sheepstealers full-back line — flagged beforehand as a weak point — often ended up in one-on-one battles with Paul Mannion, Cormac Costello and Conor McHugh.

You know this is the wrong thing to do because Dublin would never do it; there was a swarm of young men in blue protecting their inside backs even when the game was over, and even though they conceded three goals.

Offering an even contest for kick-outs goes in tandem with that; Roscommon could not manage it, and both failings were identical to those that afflicted Cork in the league semi-final.

James Horan has been accused of being too obsessed with strangling Dublin’s kick-out plan, but it seems the only sensible option, one that is perhaps the cornerstone of Mayo’s ability to at least offer the champions a close game.

In additon, this view that the black card means you cannot defend properly is nonsense. Donegal’s success in 2012 was hardly based on dragging attackers to the ground; indeed, they were disciplined in not giving away many scoreable frees.

No matter how creative or accurate you are up front, you cannot hope to beat Dublin while giving away goals. Kerry had one of the best forwards of all-time give perhaps his greatest display last year, and still lost.

The team that might beat Dublin must above all possess a great deal of self-belief, an arrogance and defiance that borders on the unwholesome. Tyrone still look short of All-Ireland material, and have endured uneven results in recent years, but they cannot be accused of being beaten before the ball is thrown in against Dublin.

They have played strong sky blue teams three times in the past two seasons and not lost by more than a score.

As a consequence, when they conceded two quick goals to Dublin this spring, they did not down tools, as all the teams mentioned above did. Things might be different in championships, but the healthy arrogance that is synonomous with Tyrone GAA is still the attitude needed to trouble the metropolitan machine.

Jim Gavin has that much talent at his disposal that a team might meet all our criteria and still lose.

But as Roscommon U21s would tell you, it is infinitely preferable to play to your limits and lose than to be left to wonder. Win or lose, whatever teams can test out Dublin’s mental strength this summer will have proven their own.