Brian Cody's Kilkenny is moulded on principles of 'transition'

DURING Christmas 2011, RTE screened Kilkenny v  Tipperary: The Trilogy, a production largely based around that year’s All-Ireland final, the third successive final meeting between those great rivals.

At one stage, Brian Cody expressed concerns he felt throughout 2011, that maybe “the team was at an end”.

It was one of those rare occasions Cody made such a personal admission so public but it was clear from that programme that he shared at least some of the doubts that people had after the 2011 league final hammering to Dublin.

Although Kilkenny retained the All-Ireland again in 2012, there was still that sense of them being in a transitional period. Prior to that 2012 season, six players with a total of 42 All-Ireland medals had departed.

Yet 10 players won All-Ireland medals for the first time in 2011. Nine more achieved that target in 2012.

Over the years, it’s difficult to gauge how much transition has impacted on Kilkenny’s success. In an interview 10 years ago, Cody said that a team “is always in transition”.

When he spoke at the GAA’s Annual Coaching Conference in 2007, he adapted on that theme: “People say that a settled team is everything. I would never worry about a settled team. I would certainly have an obsession with having a settled spirit, a settled honesty, a settled drive, a settled workrate, a settled savagery to win – call it what you like.”

Although he has always had a stable core of players, Kilkenny have played 66 championship matches under Cody’s watch and he has named an unchanged team on just seven occasions. Even when winning teams were cruising, nobody was safe. 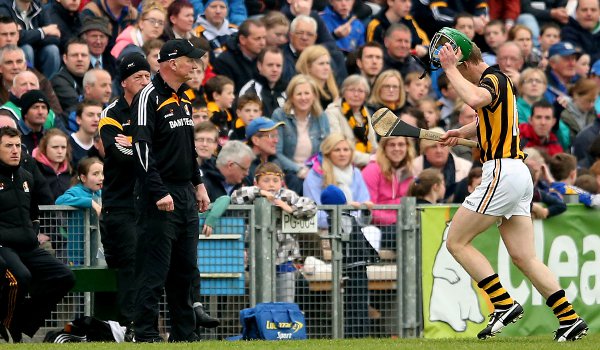 Kilkenny’s Henry Shefflin is replaced earlier this month against Tipperary

That philosophy and culture still holds. After scoring 3-5 from play against Tipperary, Colin Fennelly was left on the bench for Kilkenny’s next game against Galway.

“We don’t have a clue what the team will be the next day,” said Fennelly after the semi-final win against Galway. “From the quarter-finals, the backs changed. Even the forwards changed and there are still a lot of lads who have to come back to play.”

Having the team in such a state of flux during the spring has never bothered Cody but he knew after last summer that he needed to inject more youth and pace, as well as increasing the squad’s depth.

He set down a marker from the opening game against Clare when three rookies were named in defence and there were experimental selections right through the team’s spine.

Not one player started every league game and Kilkenny used 32 players during this spring’s successful campaign, just three less than in 2006, when Cody began the construction of his third team.

The marquee players back then had a more positive age-profile and less mileage clocked up. The wear and tear of some of the older crew has been really evident this spring, while Kilkenny don’t have as many quality players rolling off the production line now. After two decades of complete dominance in Leinster, Kilkenny’s underage production line has stalled.

There are currently no U-21s on the panel but serving an arduous apprenticeship has often been a prerequisite to making Cody’s teams and the majority of players introduced this spring are in their mid-20s.

Many of those players don’t have the same pedigree or history of success of their predecessors but some of those great players weren’t precocious young talents, predestined for greatness. Derek Lyng, Martin Comerford and Eddie Brennan never played minor for Kilkenny but they accumulated 20 All-Ireland medals.

The development squads’ model has reduced the likelihood of finding diamond players beyond minor level anymore but players still have a history of stepping up in Kilkenny.

Those players may still not be as talented but new players also grow quickly from being hot-housed from a training environment dominated by some of the game’s greatest hurlers. Just as importantly, young players quickly learn the standards great teams demand.

When some of Kilkenny’s great players do walk away in the next year or two, Kilkenny will be less of a force. Yet those departures are inevitable and Cody and Kilkenny are already preparing for that reality.

And after another spring of experimentation and constant flux, Kilkenny won their third successive league title.