THE way the Scottish media reported the violent events that occurred in Amsterdam before and after Celtic’s game with Ajax in the Champions League has left me wondering what an independent Scotland will be like.

The media seemed too ready to swallow what Dutch police were feeding them.

Had it been the Tartan Army discriminated against in this way would press reportage have been different? You can only wonder.

The report went on to suggest that police had claimed: “Celtic fans armed with bottles and sticks attacked plain-clothed officers in an incident described as ‘coming out of nowhere.’”

Reports and news stories continued to give too much sway to the words of Amsterdam’s police.

Rob Van Der Veen, their spokesman, said: “Ajax fans stole a flag from Scottish fans who then retaliated by throwing bottles. When our plain-clothed officers went in to make arrests they were ambushed.”

The story doesn’t ring true. Provocation of Celtic fans began long before the suggestion that it all began over a stolen flag.

For many the reports lacked a full explanation of events; the story wasn’t in context. Celtic fans on forums and Twitter offered another version.

Videos were posted online featuring a hooded swarm of Dutch fans carrying pickaxe handles attacking the Old Sailor cafe the day before — estimates suggest up to 100 fans descended outside the venue where around 50 Celtic fans were drinking.

Some supporters even suggested guns were involved. Aston Villa manager and former Celtic player Paul Lambert was quick to defend supporters, saying: “I played for many years at Celtic and I never encountered any bother.

“I played in the UEFA Cup final and we took over maybe 80-90,000 to Seville and there was not one arrest while we were there.

"Knowing the club and the fans the way I do, I find it incredible. I’m not sure they would have started anything.”

Undoubtedly part of the problem lies with the Dutch police, whose plain-clothed officers went in to arrest Celtic supporters.

To the Hoops fans, the Dutch police looked no different from Amsterdam hooligans and casuals.

Some Celtic fans waded in to protect and assist their fellow supporters who looked under attack. I’m not condoning violence, but it’s natural human behavior to protect your tribe when under threat.

Common sense seems to have been absent from the poorly organised Dutch police. If arrests had to be made, then perhaps the plain-clothed police officers should have been accompanied by officers in uniform to make it clear what was going on. 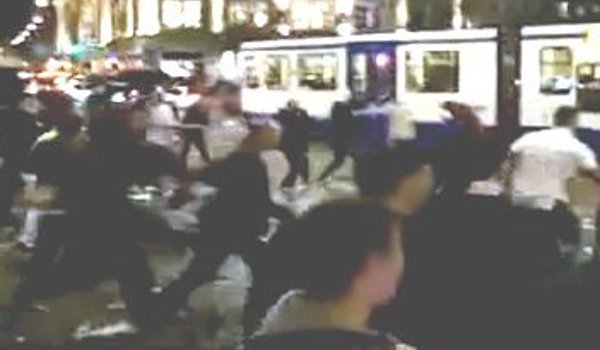 Brian McAuley, 40, of Carluke Shamrock Celtic Supporters Club said: “If there are troublemakers then that situation should be dealt with on its merit and not be an attack on 1,000 people, it was indiscriminate and out of all proportion.

“The police waded in hitting everyone with batons, the crowd was full of young children, pensioners and even a pregnant lady.”

This was another fact that was missing on Reporting Scotland. And there were more.

There was undoubtedly a sectarian element attached to the treatment of Celtic Supporters, and disciplinary proceedings have been opened after a ‘Fenian Bastards’ banner was unveiled by Ajax supporters.

You have to ask the question, how many of the plain-clothed Dutch police felt the same way as the home support?

Some Celtic supporters have suggested the ranks of Dutch hooligans were bolstered by supporters of Dinamo Zagreb, known for their racist and far right affiliations. 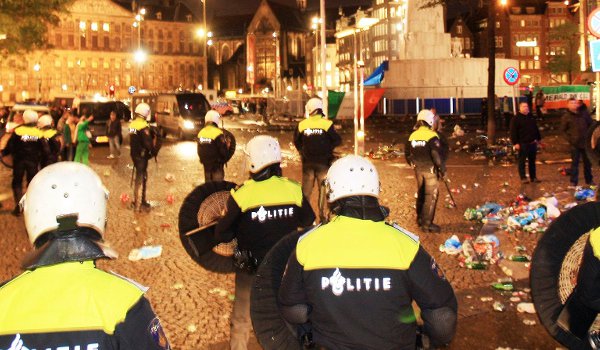 Six Celtic supporters were charged were charged with acts of violence against police officers in a public space. Photo sImago/Barcroft Media

They were also in Holland for a game against PSV Einhoven the following night. Twenty-eight out of 44 arrests were Scottish — six of them will be brought to trial for violence against police officers on November 21.

Gus Mooney, 51, of Glasgow, said: “I’ve travelled to various Celtic games in Europe but never witnessed anything like this.

"The opposition fans had an ugly far-right feel about them, it was like going back to the bad old days of the National Front in the 1980s.

"I wouldn’t go anywhere near a game in that part of the world again. I was relieved to get home in one piece.”

Celtic manager Neil Lennon questioned the Ajax support. He said: “I do feel Ajax have a culture and we saw a bit of it at Celtic Park.

“Manchester City and Manchester United have had problems there as well in recent years. I don’t think it’s our issue, I think it’s more their issue.”

See More: Celtic, One For The Bhoys, Popular, The Bhoys