Tony Cascarino of Aston Villa during a photocall at Villa Park in 1991. (Dan Smith/Allsport)

TONY CASCARINO has hit out at reckless club owners as his old side Aston Villa stare into the financial abyss.

A missed tax bill last week pushed the club to the brink of administration and the former Ireland star has advocated a German-style ownership model as one method to curtail the spending frenzy of Championship clubs.

Speaking to The Irish Post, he said: “It’s a terrible situation at Aston Villa and my fear is it’s going to get a lot worse before it gets better.

“Of course a club like that will survive. You are talking about a club that has won the European Cup and should by rights be among the biggest sides in England. They won’t go under. But It looks like they’ll have to sell Jack Grealish. They are under severe financial constraints. They already look out of contention for promotion next year.”

Cascarino played for the club between 1990-91, during which time they finished runners up to Liverpool in 89/90. But he fears the chances of a return to those halcyon days are slim.

Tony Cascarino scores for Ireland against England in 1990

“The club is going through a difficult time, and I can’t see it getting better in the short term. I do think a change of owner is the most likely outcome at Villa.

“But then you look at the last two owners they’ve had and that in itself isn’t a cure. The so-called ‘fit and proper’ test for new owners isn’t fit for purpose.

“I would look at the German model (known as the 50+1 rule).  This puts off some of the more short-term investors who might take a dart at it in the short-term but then pull out when they get bored or lose their nerve.”

Cascarino was also critical of the ownership situation at former club Chelsea and has called them to act decisively on the Antonio Conte situation.

“It’s a club operating with uncertainty at every level, from the owner to the coach, to the director of football and now the players,” he said.

“And the photo from the Wembley celebrations that Willian doctored to hide Conte's face was just odd. There is clearly a lack of respect there.  The players think he is going. But if that’s the case, make it clear.

“The impression I get is the owner wants to sell the club. There are issues for him in terms of residency. He’s not investing like he once did.”

Cascarino was at a book review of Simon Hart’s World In Motion: The Inside Story of Italia 90 which was held at the Claddagh Ring in London by the Republic of Ireland Soccer Supporters Club recently. 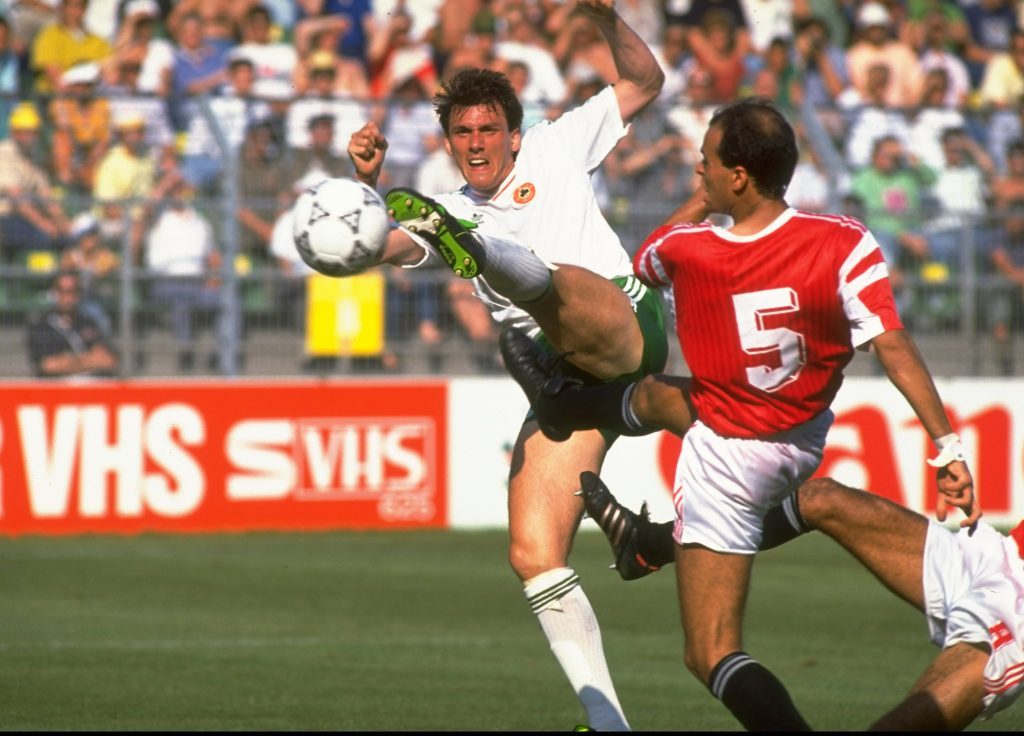 Ireland defied the odds to reach the quarter finals of that competition, with Cascarino scoring in the famous penalty shootout against Romania in Genoa. But events off the pitch also left a lasting impression on the popular forward.

“I kept getting calls to go down to the gate at just about every match,” he said.

“My father is from Italy and there were cousins from every part of the country turning up. It was bizarre. I never knew I had so many relatives. They all wanted the same thing – tickets.

“Then, when we were in the Vatican, the Pope ended up having a really long-winded conversation with Packie Bonner. We were watching them and it looked like they were practicing dives at one point. It was absolutely surreal. Pope John Paul II was apparently a semi-professional goalkeeper when he was younger, and there he was, showing Packie how he used to do it. The pair of them swapping tips.  We couldn’t get over it.

“When we got knocked out against Italy, Packie had fumbled the shot that led to Toto Schillaci’s winner.  We got back in the dressing room and Jack congratulated everyone for their contribution and said enjoy your holiday. Everyone apart from Packie. He just turned to him and said, ‘By the way Packie, the Pope would have saved that one'."

Cascarino has faced a different set of challenges this year and announced earlier this month he will take time out after the World Cup to undergo surgery to remove a brain tumour.

“It was benign, thank God. And I am very lucky in that regard.  I had symptoms I tried to ignore for quite a while, what I thought was just simple tinnitus and headaches.

“But it got to the stage that I had to get it checked out. I’m glad I did. Most men are the same and will leave it and hope it goes away.  My message is don’t. Get it seen to as soon as possible.”