RACHAEL BLACKMORE, the Irish jockey who became the first women to win the Grand National, has been crowned RTÉ Sportsperson of the year.

The honour caps a fantastic year for the 32-year-old, having also become the first woman to be crowned leading jockey at the Cheltenham Festival.

The Tipperary native rode six winners at this year's festival, including an opening-day victory on Honeysuckle in the Champion Hurdle, which saw her become the first woman to win the prestigious hurdling event.

The following month she partnered Minella Times to victory at Aintree, becoming the first female jockey to win the Grand National.

A shocked Blackmore said it was an honour to win the award given the strength of the competition in what has been a fantastic year for Irish women in sport.

Speaking at the ceremony that was broadcast on RTÉ, she said: "To be recognised like this is just phenomenal.

"It's been an incredible year for women in sport, we've seen over the last two hours with all the footage, it's just been incredible.

Blackmore was up against strong competition for the gong, with last year's winner Katie Taylor among those also in the running.

Boxer Kellie Harrington was in contention following her Gold at the Tokyo Olympics, as were Gold medal-winning paralympians Ellen Keane and Jason Smyth.

The 19-year-old Dubliner only made his senior Ireland debut in March but has already amassed 10 caps, keeping four clean sheets. 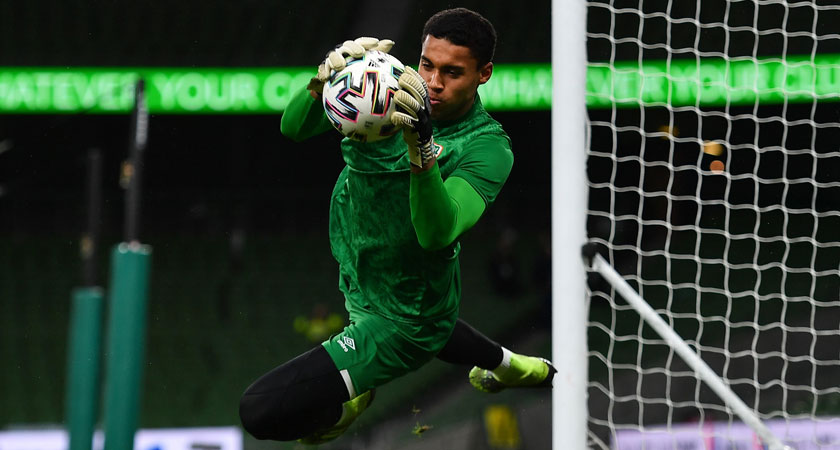 Bazunu warming up ahead of his senior Ireland debut in March (Image: Eóin Noonan / Sportsfile via Getty Images)

He denied Cristiano Ronaldo from the penalty spot when Ireland faced Portugal in a World Cup Qualifier in September, his stern resistance only being broken in the dying moments by a late brace from the mercurial forward.

However he shut out Ronaldo and his compatriots when the sides met at the Aviva in November.

He is currently joint top of the League One clean sheet charts, having kept nine for Pompey so far this season.

Other winners on the night included Dominic Casey, who was named Manager of the Year following Ireland's first ever Olympic Gold in rowing.

Meanwhile, John Treacy, who claimed Silver in the Marathon in the 1984 Olympics in Los Angeles, was inducted into the RTÉ Sport Hall of Fame.

Reports: Gavin Bazunu will speak with Manchester City to decide his future at the club