How Keith Fahey paved the way for so many others

HIS life appeared perfect but it wasn't. He may have been earning close to £500,000 a year, scoring crucial goals in European championship qualifiers for Ireland, winning League Cup medals at Wembley with Birmingham, but Keith Fahey had it hard.

Emotionally, there was the torment of losing his father, Declan, who he shared a special bond with. “That was a huge blow," he said in the months after he passed away. "Huge. And it took me a while to come back to myself."

If the mental baggage of dealing with grief's unwelcome visit weighed him down then the additional burden caused by a debilitating hip injury had an equally traumatic effect. Troubled for over three years with a problem that forced him out of the Euro 2012 finals, and led to him crawling onto his sofa in pain night after night, he gave up the struggle last week and announced his retirement.

At 32, it seems too soon. Footballers, even those affected by injuries, usually get another three years out of the game before either they, or some cold-hearted manager, decide it is all over. With hip injuries, though, different rules apply, an issue he was fully aware of last October when, in the aftermath of St Patrick's victory in the FAI Cup final, he privately told a friend: "I can't get away from defenders the way I used to."

He couldn't escape the truth, either. The game he had learned to master as a kid was gradually slipping away from him, threatening to turn him into an old man before his time. Since 2012, his will has been stronger than his body but after yet another operation in June, reality bit. "After advice from my surgeon, I've decided I can no longer go on playing professional football," said Fahey.

He walks away with a legacy, though, which may seem strange given how he won only 16 international caps. Yet while the League of Ireland has produced better players - Paul McGrath, Roy Keane - and while others of his generation have enjoyed longer and more profitable careers in England, Fahey's name is the one that will define this League of Ireland era.

Partially that is because the bulk of his career was spent here, whereas other League of Ireland alumni, Kevin Doyle, Daryl Murphy, James McClean, and in particular, Shane Long, were all young men when England called. Yet there was more to it than that. Whenever Fahey played, he was nearly always the best player on show, the one other teams looked to shut out, the one they tried to sign.

As the years passed and Reading took away Doyle, Long and Alan Bennett, Fahey would look and wonder, 'why not me?' It was one thing being told he was the League's brightest talent but seeing Sunderland sign Daryl Murphy and Roy O'Donovan, Livingston sign Wes Hoolahan, Coventry get reunited with Colin Hawkins, Cardiff offer David Forde a way back, had its effect. 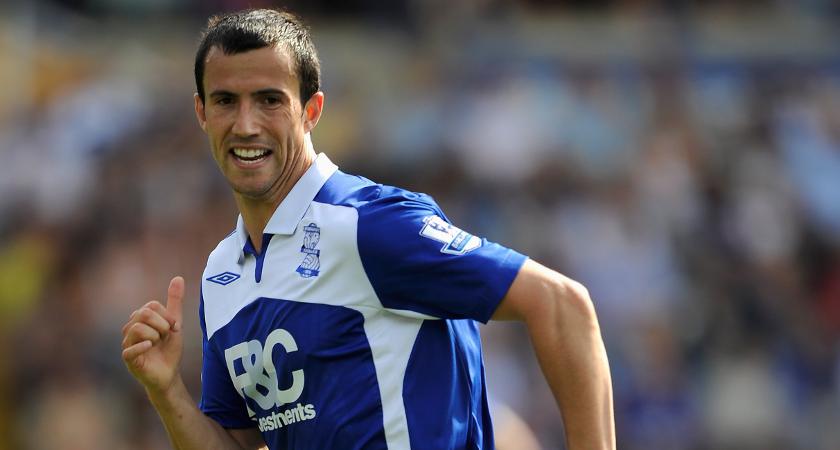 Fahey finally signed for Birmingham in 2009 [Picture: Inpho]
“I was 25 when Birmingham came in for me," Fahey said. "I did worry when I could see guys going away (before me). That was when I thought, 'what’s going on here?' That was the kick in the ass I needed and it turned me into the player I am.”

He was a player who wasn't afraid to try things, who knew he had talent because everyone told him so, because Arsenal signed him when he was 15, two years before Aston Villa paid £400,000 to Arsene Wenger to get him on their books. Yet he never settled.

“I was so young when I left home that I just couldn’t enjoy it," he said. "The homesickness was a killer. I wanted to be around my family doing what my mates were doing. Instead I was stuck in digs, craving my own space, wishing I was somewhere else. Football stopped being a game. It became a job and a job I didn’t like.”

At 20, he was ready to find himself a different profession, which was when Bluebell, the local club where his friends played, came in, acting as a handy stopover until he found himself a trade. Luckily for Fahey, and Irish football, the then St Pat’s manager, Eamonn Collins, knew what his true craft was, and persuaded him to return to full-time football.

And that’s what made him. Suddenly football became his passion again and the combination of his father’s home cooking and Collins’ smart guidance brought the best out of him. “I’ll always be indebted to League of Ireland football," Fahey said in 2009, just after signing for Birmingham. "If it wasn’t for a full-time set-up at Pat’s, I don’t think I’d be sitting here now. The levels of concentration would have been hard to keep up, as would the fitness requirements. The League made me.”

And he made the League a brighter place to be on Friday nights, even if English clubs chose to either ignore him or doubt the quality of the League he was playing in. “Alex McLeish and the boys at Birmingham admitted to me that he just didn’t know what to make of it in Ireland," said Fahey.

“They said they were impressed by what they saw from me but they came away saying ‘well, was that against Mickey Mouse opposition?’ To them, they found it hard to judge the quality and it was only when they saw me play in Europe that they decided to take a gamble – as they saw it.”

On the back of Fahey's subsequent success, the doubts decreased. Sunderland would sign McClean, Birmingham would come back to the League of Ireland for Jay O'Shea. Whenever a selling club would hear the words - 'can we trust what we see?' - they could answer. 'Well Everton did with Sligo and Seamus Coleman; Reading did with Cork and Kevin Doyle; Birmingham trusted Keith Fahey'.

More to the point, the next generation could view him as a pathfinder. Richie Towell, the nearest the League has had to another Fahey, namechecked him last year. "Keith has shown you don't need to be in a rush to get away," said the Dundalk midfielder last year. "If you are good enough, your chance will come."

In 2009, opportunity knocked for Fahey. He took it, playing 121 times for Birmingham and 16 times for Ireland. Yet, within himself, he sometimes felt he sold himself short. "I don’t think I have really shown how good I am," said Fahey in 2011. "I have yet to get to a consistent level of excellence at a higher level. Yes, it's easier said than done. It is nothing to do, ability wise. It is more to do with my head.”

If his head wasn't always in a good place during his playing days, you'd hope that retirement will prove to be a gentler environment. History suggests it rarely is for ex-players yet if there is one thing Keith Fahey can draw comfort from, it is the fact that he, more than any other player, changed the way the League of Ireland was perceived.