The home of the GAA in the Midlands was plunged into jeopardy last month when Highways England failed to secure planning permission from Solihull Council for the new clubhouse and pitches on the new site on Catherine-de-Barnes Lane.

There is a crunch meeting due to take place with the council on Wednesday, August 11 to determine whether the plans will finally be approved.

In a statement of support to the Warwickshire GAA, Aston Villa’s Grealish said: “As a boy I spent many happy years playing Gaelic football in Páirc na hÉireann.

The skills I learned and the encouragement I received helped me become the player I am today.

“Grassroots sports are so important for kids across the West Midlands. Warwickshire GAA is at the forefront of making sure everyone, from all backgrounds, has the chance to play and participate. I fully support the campaign to save Páirc na hÉireann.” 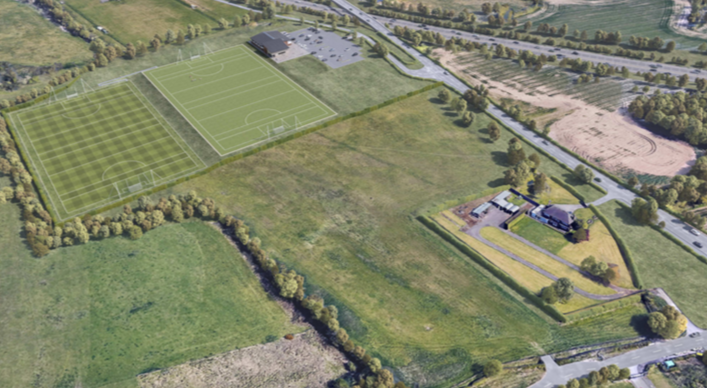 The proposed new clubhouse and grounds at Pairc na hÉireann

That sentiment was echoed by Uachtarán Cumann Luthchleas Gael McCarthy.

“Páirc na hÉireann has been such an important facility for the GAA and the West Midlands community for many years,” he said.

“I am hopeful that the planning permission will be given on August 11, and I look forward to visiting Solihull to see the new development in the near future.”

The organisation’s 3,000 volunteer members in the region were left reeling when it transpired that major work on the M42 at Junction 6 would see a new road run right through the current site of its pitches, clubhouse and a memorial to its deceased members.

However, after a campaign led by the local GAA, supported by the huge Irish community in the West Midlands, plans to relocate and rebuild these much-loved and vital facilities were agreed with Highways England.

Warwickshire Chairperson Michael Collins outlined the current position facing the county. “Planning permission has been deferred twice now and a further deferral or rejection would prove catastrophic for us,” he admitted.

“Any appeal process could take over twelve months to complete.”

He added: “Highways England has stated that they will commence work immediately after the council’s August 11 planning meeting, regardless of the outcome.

“Such a scenario would mean that we would be left with barely one full size pitch and an uncertain future.”

Warwickshire GAA has already agreed and outlined ambitious plans to open the new facility to the local people of Solihull Borough and has had numerous expressions of interests from sports clubs and schools.

“For us to move forward as an amateur sporting organisation we need the certainty of this planning consent to continue to flourish, and also provide a fantastic facility for the local community,” added Collins.

TV sporting picks for the weekend May 13-15