Jock Stein: 30 years on from his death, we reflect on an unsung season

AS HE did throughout his 13-year tenure as Celtic manager, Jock Stein is still making positive headlines.

The news that Celtic will gift the gate money from Sunday’s Jock Stein anniversary match to the current refugee crisis summoned the rationale for the club's world-class reputation and their own reason for being.

It's probably fair to say that Celtic's most vital and compelling historical figure remains the former manager who died tragically in the aftermath of a World Cup qualification match at Ninian Park in Cardiff on September 10th 1985.

The pressures of managing Scotland and a state of declining health had taken its toll on Mr Stein and his death was profoundly felt across the football world. Ten years earlier it was a wonder that Jock Stein survived a major car crash at Lockerbie on the A74 after returning from a holiday with his wife and friends in July 1975.

The crash and the previous development of a heart problem that saw him hospitalised in December 1972 had understandably diminished the Big Man’s seemingly invincible capacity for greatness in creating a team described by Bill Shankly as the greatest club side in the world citing the European Cup, nine Scottish league titles in a row and victory over Don Revie’s Leeds in Europe as reasons for his evaluation when pressed by a journalist.

While reflecting on Stein’s singular legacy at Celtic in light of Lisbon and nine-in-a-row, it’s easy to overlook the domestic double he claimed in the 1976–77 season before his eventual departure from the club in 1978.

The achievement was of momentous significance for the Celtic manager, on both a personal and professional level, as the team and football culture in general had already begun to shift beyond recognition.

The car crash had undoubtedly affected him physically, and more than he would like to admit. Rangers had quashed Celtic’s quest of ten league titles in a row by the end of the 1974–75 season.

During Stein’s official absence throughout the following season, Celtic suffered a barren campaign as a strong Rangers side asserted themselves further with a domestic clean sweep.

Despite the accident, associated health problems and a pending court case over the accident, the 1976–77 season was to be Jock Stein’s Celtic swansong, his Lazarus comeback and his final opportunity to prove that despite everything, including his own legacy weighing him down, he was capable of one last shot at the title despite extremely difficult odds. 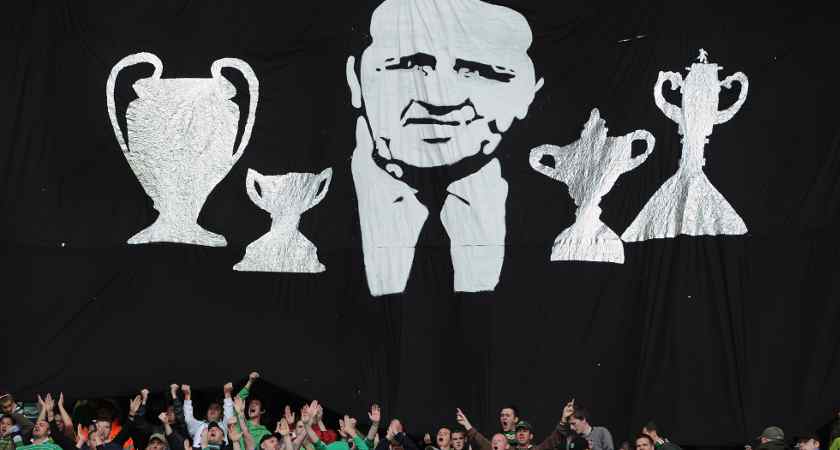 Celtic supporters reiterate their admiration for Stein [Picture: Getty]
Pat Stanton served 13 years of service to Hibernian and found himself on the fringes. The season that followed as a Celtic player granted a stunning rebirth. Having cemented his place at Hibs it is often overlooked that he also left his mark on a robust Celtic side that had earned itself much respect and admiration.

The first game of the season on September 4, 1976, against Rangers was Stanton’s first experience of the Glasgow derby. Suggesting the shifting times, the game was broadcast to millions while 57,000 showed up at the ground.

A picture of Stanton congratulating Paul Wilson, the player with his two arms stretched out in defiance implies something of the team’s character that season as well as Wilson’s remarkable ability to shine in key games. His second goal in a brace had silenced premature victory chants from Rangers fans with three vital minutes to go.

Pat Stanton was the proud winner of a Scottish League winner’s medal after a solitarily goal from Celtic’s Joe Craig in a hard-fought victory against Hibs. He said: "When Jock Stein spoke to me about joining Celtic someone said to me as I left Easter Road: 'You’ll be back here to win the league'. I laughed and said 'you must be kidding me'; but it actually happened. I was sitting in the away dressing room that day with that medal thinking about a lot of water that had passed under the bridge.

"The first time I sat in that away dressing room was before a public trial for Hibs as a boy and there I was all those years later in a Celtic jersey having just won the league, it was absolutely terrific. As I was sitting there big Jock came over with a smile on his face, he looked at me and said: 'No bad eh?' I said 'It’s pretty good boss.'"

Undoubtedly, Stein was aware of the emotional nuances of Stanton’s league win. Having recognised his talent while at Dunfermline, managed him for a spell at Hibs and long admired him as an opposition player, that season he finally got to utilise his skill, building a strong Celtic team from the back.

They finished the season undefeated in five meetings with Rangers. Stein had created an atmosphere of invincibility inside a dressing room bursting with outstanding characters both in the side and among the manager’s tight circle, which all helped create a winning mentality long before kick-off.

Stanton added: “Jock had a lot of impressive people around him. Sean Fallon was a smart man and a hardy soul. Jock liked sporting men around like Jimmy Steel; they would talk about boxing and horse racing. I remember if things got too tense Jimmy used to say: “It’s only a game boys.” Jock loved Doyley [Johnny Doyle] because he was a bright and breezy presence, he was always up to something - playing jokes on people.

“Kenny (Dalglish) was never slow in offering his opinions. When you’d see him years later being interviewed on television he often gave one-word answers, but Kenny was nothing like that in reality, he was very quick-witted and always had an opinion.

“When Danny (McGrain) talked you listened because his comments would only come around once in a while but they were always constructive and straight to the point." It was a team that consisted of many Celtic greats, including the emerging talent of Tommy Burns and the biggest name in club football management. 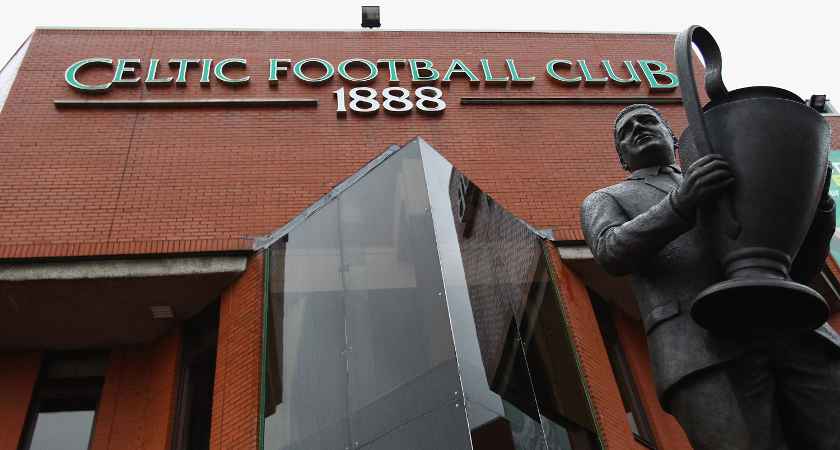 A statue of Stein with the European Cup, his most famous feat, stands tall outside Parkhead [Picture: Getty]
Jock Stein’s final Celtic honour was achieved on May 7, 1977, after a 1–0 victory over Rangers in the Scottish Cup final. While many supporters fully expected Kenny Dalglish to take a controversial penalty awarded to Celtic, it was Andy Lynch who stepped up to score.

In the aftermath of glory, things changed rapidly. Weeks later skipper Dalglish had left for Liverpool and on the first day of the 1977–78 season came another watershed moment as Stanton sustained a career-ending injury away at Dundee United.

The vital cog on which Stein built his final successful side had played his last game for Celtic. A glorious era at Parkhead was finally coming to a close with the loss of a number of key players through injury and pastures new.

The memories of that last comeback would remain with a new generation of fans that were perhaps too young to remember that day in Lisbon. Stein, living by his own philosophy, had created new heroes for another era and managed to work his alchemy at Parkhead one final time.