Conor McGregor's long running feud with longtime rival Khabib Nurmagomedov will go down in UFC history as one of those memorable moments of the Crumlin native's career.

Nurmagomedov beat McGregor at UFC 229 in 2018. Khabib retained the Lightweight Championship in the UFC after submitting Conor McGregor in Round 4.

After beating his rival, ugly scenes followed when Nurmagomedov jumped out of the octagon to dive at McGregor's teammate Dillon Danis.

McGregor was also in the action and was also attacked by two of Nurmagomedov's teammates in the cage.

The 33-year-old Russian was handed a nine-month suspension and a fine of $500,000 by the Nevada State Athletic Commission. McGregor got a six-month ban and a $50,000 fine.

Two years ago today: Khabib beats Conor at UFC 229 and then all hell breaks loose pic.twitter.com/BWYgvzUtLY

After this Khabib retired from the sport.

According to The Mirror Russian President Vladimir Putin spoke to the Dagestan man about the incident.

Putin cracked a joke that he would not allow the late Abdulmanap Nurmagomedov, Khabib's father and coach to punish him for his role in the brawl.

"Yes, of course you did not represent a team you were on your own. You did not perform for your country, but you performed for yourself.

You are a Russian citizen and we are not indifferent to our citizens, no matter where they are or what we do,"

"This is why we were witnessing attentively, I will ask your father not to punish you very cruelly because you accomplished the main aim, you won with dignity and [it was] convincing. I believe that all of us in our country are one big family.

"No matter what happens, we need to try and avoid rashness like charging someone, regardless of what is going on. Anything can happen in the family, but we never allow ourselves to cross the line.

"Of course if we are attacked from the outside, not only you, we could all jump in such a way and there could be hell to pay. But it's better to avoid such a course of action."

To which Nurmagomedov responded to the Russian president by saying:

"For now they are only talking about my jump even though I performed quite well. In comparison with his behavior, his disrespect towards me, my parents, my country, I behaved with dignity.

Of course I have not controlled myself in some moments because they were provocations even during the fight. 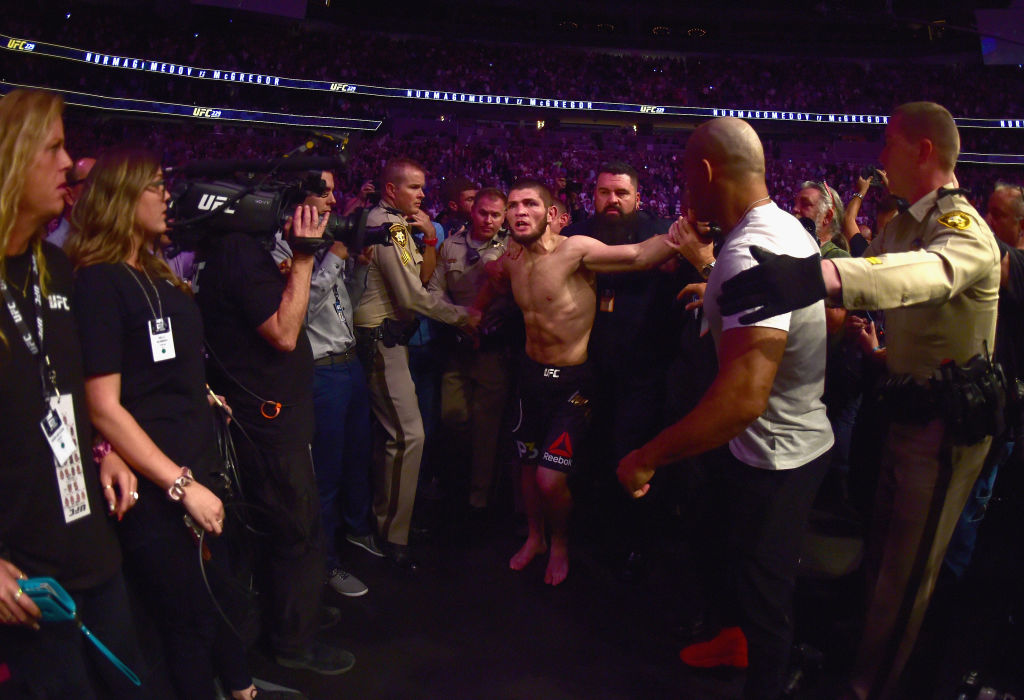 LAS VEGAS, NV - OCTOBER 06: Khabib Nurmagomedov of Russia is escorted out of the arena after defeating Conor McGregor of Ireland . (Photo by Harry How/Getty Images)

Conor McGregor has said 'he would love to buy Liverpool'