CELTIC secured their first trophy under Ange Postecoglou after a Kyogo Furuhashi brace in a 2-1 win over Hibernian in the League Cup final at Hampden.

Celtic trailed to a Paul Hanlon header early in the second half but the Hoops hit back a minute later through Kyogo, who was returning to the side after missing two games through injury.

The Japanese forward then sealed the win with a sweet first-time chip over keeper Matt Macey in the 72nd minute.

Oh my word, what a finish that is from @CelticFC's talisman! 🔥

Ange Postecoglou's side have come from behind to lead 2-1 🍀 pic.twitter.com/08fs4b4ClP

Celtic had to survive a late scare when Kevin Nisbet's header rattled the post as Hibs threw everything forward in an attempt to force extra time.

Joe Newell also had Celtic hearts in mouths with a strike deep into injury time that keeper Joe Hart turned away.

However the Hoops held on to win the trophy for the fifth time in six years.

'Players have risen to challenge'

Speaking to Premier Sports after the game, Postecoglou said he and the players relished the challenge of bringing trophies to Celtic Park.

"You don't accept this position to shy away from creating special things and we're still at the beginning," said the manager.

"We want to enjoy this because this group of players has been through an awful lot and yet risen to every challenge, including today. 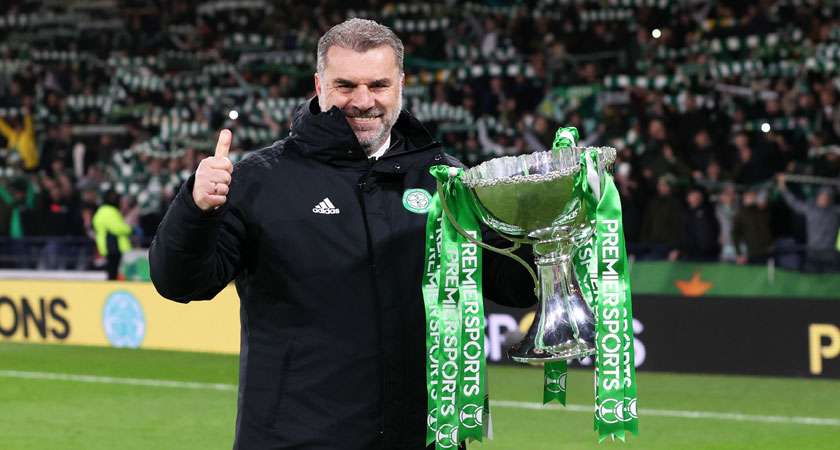 "We just want to keep going."

He added: "It's the only measure at Celtic, you win it and then you go on to the next one."

Celtic dominated possession in the first half but had little to show for their efforts, although a deflected David Turnbull effort had Macey scrambling frantically across his goal line.

However they were dealt a blow when the influential midfielder was forced off after turning awkwardly, being replaced by Nir Bitton.

Celtic were also denied a penalty after Paul McGinn appeared to push right-back Greg Taylor from a Celtic corner. 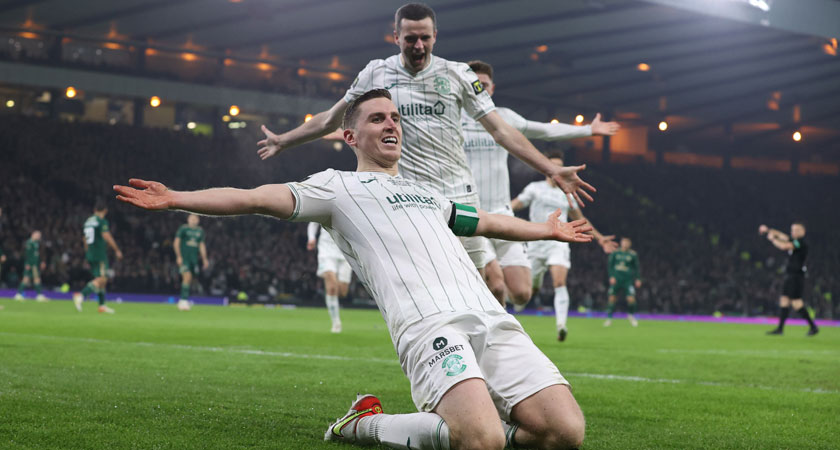 After a cagey first half, the game exploded into life early in the second when Hibs took the lead through their first effort on target.

Hibs won a corner after a poor Carl Starfelt clearance and Hanlon powerfully turned Martin Boyle's cross over the goal line, despite Hart and Josip Juranovic's best efforts to scramble it away.

The green smoke was still billowing from the flares when straight from the restart, Kyogo beat the offside trap to meet Callum McGregor's ball over the top and slotted under Macey. 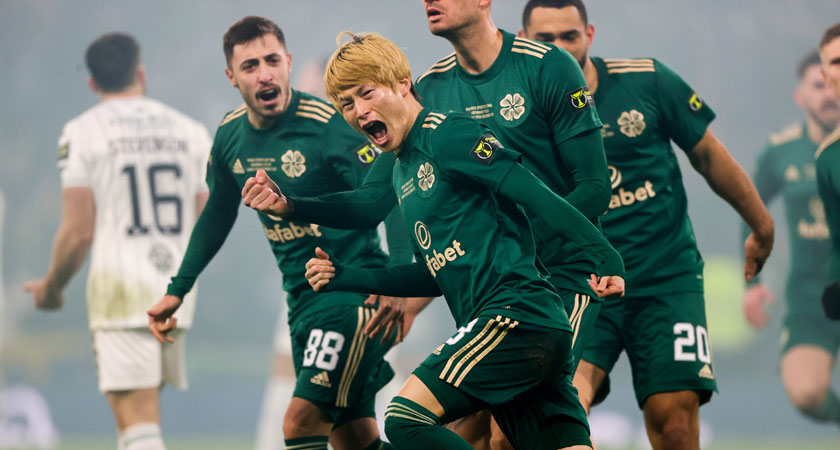 Both sides had chances to regain the lead, the best seeing Nisbet foiled by the legs of Hart, but Kyogo turned the game on its head on 72 minutes.

From a quick free kick, Tom Rogic picked out the run of Kyogo, who again evaded the Hibs defence before volleying the ball over Macey from 20 yards to seal the win.

Rogic almost made sure of victory only to see Macey turn his sweetly-struck shot around for a corner on 84 minutes.

Hibs though weren't finished and as the end of normal time approached, Nisbet saw his header come back off Hart's right-hand post.

Hanlon was onto the loose ball but fired wildly over, however Hibs will feel aggrieved that referee John Beaton missed an apparent push from Starfelt on Ryan Porteous.

Newell then tested Hart deep into injury time but the former England No. 1 was equal to it as Celtic secured the first silverware of the season.

'We want to push on and win more'

Speaking to BBC Sport Scotland after the game, captain McGregor said he hoped the trophy was the first of many after a barren season last year.

"It puts me up there with other captains who've won something here," he told BBC Scotland.

"I want to say thank-you to the guys and the backroom staff. 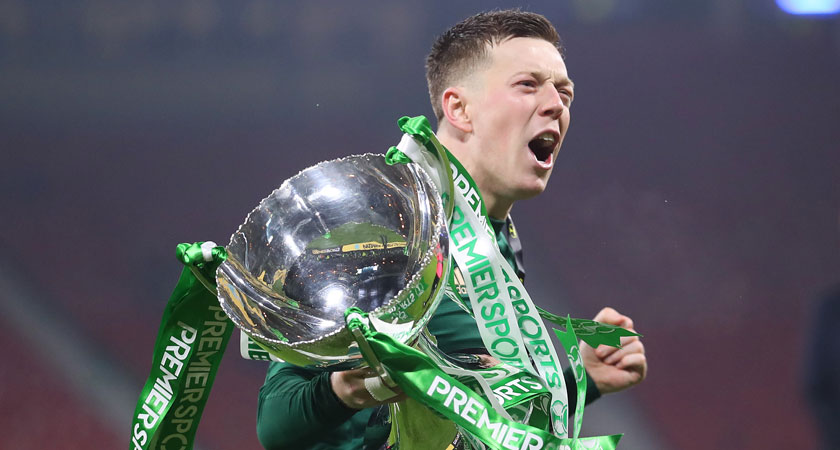 "We've got a group of guys together and we've got a trophy at the first time of asking.

"We just want to push on and win more.

"The manager asks everything of us, every day, this is the first trophy with him and hopefully more to come."