Co. Antrim native Rodgers, 48, was the only manager from the island of Ireland to be included on the 50-man list.

The former Celtic boss was ranked 24th on the list, which was topped by Manchester City's Pep Guardiola.

'He outwits the best'

Describing Rodgers as "one of the elite", the magazine praised Rodgers' versatility and man-management skills.

"Brendan Rodgers is now one of the elite, it's more than fair to say. He outwits the best,” read the article.

"He's developed the likes of James Justin and Jamie Vardy — at opposite ends of their careers. 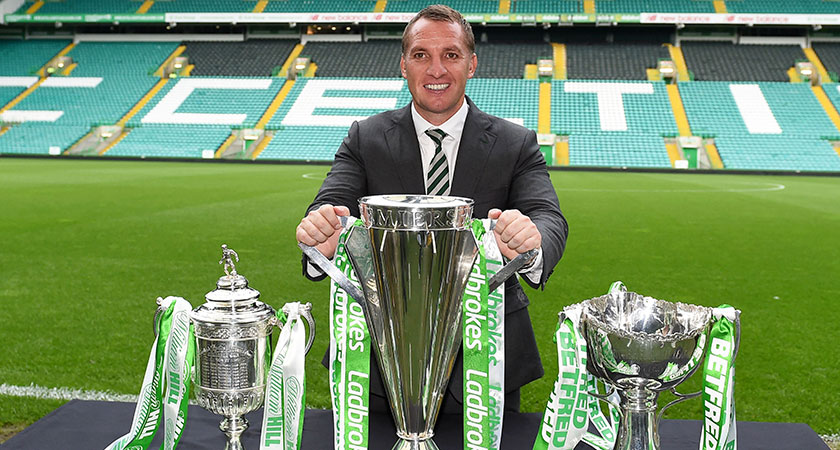 Rodgers with the first of two trebles he won at Celtic (Image: Paul Devlin - SNS Group\SNS Group via Getty Images)

"He can coach his sides in three- and four-at-the-back shapes, bending his attack between one or two prongs.

"He can cope without big stars. He can refashion full-backs on either side.

"Every season, it seems, we see something from the Carnlough Clough that we've never seen him do before — even if Leicester have underwhelmed this term.

"There are those that may never truly believe their eyes when it comes to Big Brendan's talents."

Rodgers won seven trophies out of seven at Celtic, which comprised the first two of four consecutive trebles.

He left the club in February 2019 to return to England, where he had previously won the Championship playoffs with Swansea City in 2010/11 and guided Liverpool to second place in the Premier League in 2013/14.

Last season he led Leicester City to their first FA Cup with a 1-0 victory over Chelsea in the final.

Leicester were 11th when Rodgers took over, however he has led them to consecutive fifth place finishes in his two full seasons in charge.

Despite struggling somewhat this season with Leicester in 10th place, he is among the favourites to succeed interim manager Ralf Rangnick at Manchester United next season.