TODAY marks the 20th anniversary of one of the most notable victories in the career of Irish boxing legend Steve Collins.

On November 9, 1996, the Dubliner defeated Nigel ‘The Dark Destroyer’ Benn in six rounds, finishing off his super-middleweight rival in Manchester for the second time in the space of four months.

It reaffirmed Collins’ status as one of the great super-middleweights of the 1990s as it took his record against two of the division’s biggest names – Benn and Chris Eubank – to 4-0, with two wins each over the pair of them.

Yet for all the talk the classic fights between Benn and Eubank (Eubank beat Benn in 1990 before they drew in their 1993 re-match) attract when boxing fans discuss a glorious era of super-middleweight boxing, Collins does not believe his contribution goes unheralded.

“If they know about Benn and Eubank, don’t doubt it, they know all about me,” Collins told The Irish Post.

“And if people do have to look me up, well then it’ll be a nice surprise what they find out.”

Throughout the 90s, Collins built up a reputation for being fearless, making mental strength as important an attribute as his ability to brawl.

Steve Collins, complete with a shamrock shaved into his head, leads with a left against a concerned looking Chris Eubank, who was on his way to defeat to the Irishman #boxing #legend #CelticWarrior #Collins #Eubank #Millstreet #Irish #FightingIrish #classic #retro

In beating Eubank in Millstreet on March 18, 1995, Collins became a two-weight world champion – Carl Frampton is the only other Irish boxer to achieve such a feat – but although Eubank was the champion at that point, Collins admits Benn caused him greater concern when challenging him.

“The second fight against Benn, for me, was scarier than either of the Eubank fights or the first fight with Benn,” said 'The Celtic Warrior'.

“After retiring on his stool with an injured ankle in the first fight, Benn got a lot of stick, so when he came back he had a point to prove and was so determined.

“To me, that made him much more dangerous in the second fight, and I always feared Benn more than Eubank because of his punching power.

“Of all my fights, that second one with Benn was the scariest prospect. But I really dug down deep and trained so hard for that fight to make sure that it went my way and, in the end, I was probably in the best shape of my career.

“I always had this fear of Benn’s power because I knew we were going to have to stand and trade, and I was concerned I’d get tagged by him.

“The warnings from his camp that he was out to redeem himself were there, but I had world class sparring partners to prepare. 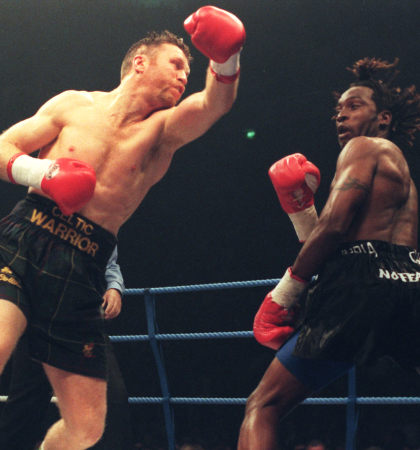 Collins misses Benn with a left hook [Picture: Getty]
“One was Glenn Catley, who became the WBC World super middleweight champion, and Eamonn Loughran – a former WBO welterweight champion – so that’s the kind of calibre I was in with.”

Beaten comprehensively and consecutively by Collins, Benn called time on his career after that second fight.

But Collins, who remains in the boxing background as a cornerman for fighters under the wing of his brother Paschal of Celtic Warrior Gym, says he and Benn are on good terms after all these years.

“Me and Nigel are very good friends now. We always had a lot of respect for each other in the build-up, but when it came to fight night there was no friendship there at all.

“Over the past 20 years we’ve crossed paths a lot and I actually met him two weeks ago in Cardiff.

“He’s a different man now than back then. When he was fighting, he was full of anger and hate, but he’s a decent guy.”

Both fighters now have sons in the professional game – Steve Collins Jr and Conor Benn – but, due to the vast difference in their weight and physique, Collins Jr (cruiserweight) v Benn Jr (welterweight) is very unlikely.

And as for Eubank? He’s still creating headlines now and then, usually through his own son, Chris Eubank Jr.