Opinion: Why no Manchester United fan should be saying no to Mauricio Pochettino

It's fair to say Manchester United at this moment in time are a shambles of an organisation. The dereliction of duty towards the football side and the complete negligence of anything related to it have made the once all conquering machine, a laughing stock.

Last weekend after the storm clouds drifted over Ole Gunnar Solskjaer and his players, it intensified the rot even further that left the club in the untenable position in regards to sacking the Norwegian.

The club have now been left with no options but to turn to Micheal Carrick or hope that Zinedine Zidane, who doesn't want the job somehow changes his mind and decides he does enjoy the Trafford Centre on the weekends.

The reports that have been coming out in the media have become stronger in regards to Mauricio Pochettino taking the reins at Old Trafford and for one I would not be against it as the Argentine has everything available to him that his predecessor did not.

🗓#OnThisDay in 2019, Mauricio Pochettino was sacked by Tottenham after 5 years in charge:

🏆"Before I die I want to manage Spurs again and try to win one title!"#THFC #COYSpic.twitter.com/PoBxUtohOT

United are well known for throwing the bag at managers in order to fix their problems. Ole got £400 million, his predecessor got nearly £300 million to fix the problems, but Pochettino isn't someone who needs vast amounts of money.

During his time at Spurs between 2014-2019, finished with a net spend of £90 million, while the likes of Manchester United, Chelsea, and Manchester City had their way above the north London club.

You have to factor in that Spurs spent no money for two years due to the stadium move and this is ultimately why I believe he left the job as the squad needed refreshing.

United will give him the tools to succeed and it could be very fruitful.

Would Klopp or Guardiola have won trophies at Spurs with the budget Pochettino got?

And having to play at Wembley for 18 months with a wage cap?

Remember it's the premier league we are talking about here too. Not the Bundesliga #MUFC pic.twitter.com/3Y52wDI5NF

When Ole Gunnar Solskjaer took over he remarked that United should be the fittest team in the league.

"I want Manchester United to be the hardest-working team in the league and among the fittest. The players know my expectations."

But United never topped any metric for running stats under Solskjaer. Players started to drop off and the acquisition of Ronaldo meant that intense running was never going to be on the agenda.

Pochettino, however, turns the idea of working hard into a reality. His work at Southampton and Tottenham are perfect examples of this.

When he took the Southampton job in 2013/2014, The Saints quickly became the hardest working team in the league. The average total running distance of 117.3km per game. This was 4k better than his next club Tottenham, who were bottom of the table with just an average of just 106.9km.

Fitness levels improved soon and he would repeat this at Spurs

United for all the talent they have will never achieve anything until intensity is drilled into them from the get go. The famous quote from Tim Notke, a high school basketball coach reads,

You look at Liverpool for example, they're successful, because Klopp instills that burning desire to cover every blade of grass even if some of the players aren't of a world class level.

Ole said he wanted us to be the hardest working team in the league. We had good moments of this, but very often we didn’t look like that at all. Pochettino has actually made that happen consistently. pic.twitter.com/3kSekRo1mo

United play like they've never played with each before and that for me is down to a lack of coaching and structure on the pitch. Jurgen Klopp, Pep Guardiola, and Thomas Tuchel have this instilled into each squad, and thensome.

United will become more astute and aware due to the Argentines' instance methods and rigid framework that comes from Marcelo Bielsa's teachings.

United essentially need a plan and structure. You need to be as good off the ball, as on the ball and the Pochettino appointment will solve those issues. 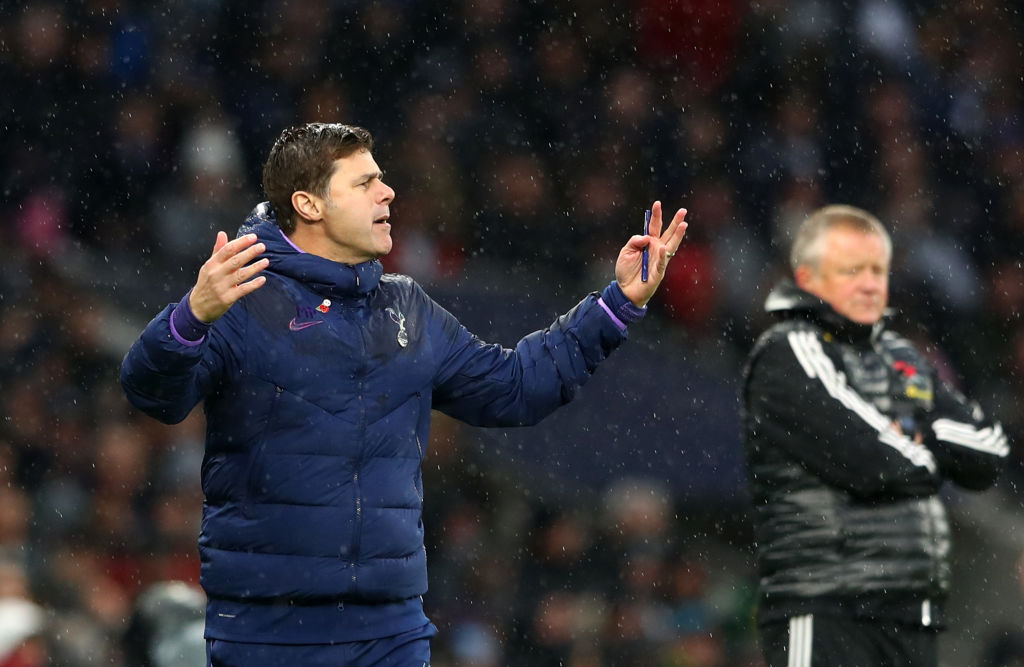 You might not remember, but Spurs under Poch were at best sublime at times. The intense running with the rigid structure was one that many teams couldn't live with. Spurs finished third in the league the year Leicster won it and realistically should have won it.

The high defensive line and a narrow attacking shape (usually a 4-2-3-1), the full-backs providing width so that the midfielders and forwards can all slip into the half-spaces and into the number 10 zone worked so well for the club that it even got them to a Champions League final.

The goals will also flow under Pochettino. Harry Kane played 242 games in all competitions for Spurs, netting an eye-watering 169 goals.

United have the blueprint to be successful with readymade winners like Cristiano Ronaldo and Varane at the club, it just needs someone to glue it together and that man could be Pochettino. United need to be hard to play against and he will assure that, it's only half the battle, but if he corrects that United side could be very exciting.