IRISH Olympic boxing hero Wayne McCullough says the current generation of Irish boxers could go on to be the finest the nation has ever produced.

And the week before that young Monaghan hopeful Aaron McKenna won his fifth professional fight in a row, defeating Rolando Mendivil by a unanimous points decision in Los Angeles.

McCullough has been monitoring their progress from afar and believes they -along with Donegal boxer Jason Quigley- have the explosive ability to make the world sit up and take notice.

“They are three fantastic boxers and we could be talking about them for decades to come if they fulfill their promise,” he told The Irish Post.

“Carl’s success doesn’t surprise me. He’s 31 now, but he is still a classy operator. We come from a similar background in Belfast, so he is one I have always watched out for. There are still plenty of big fights left for him, be that in Belfast, Vegas or wherever.

“Aaron is at the opposite end of the spectrum. He is only starting out, but he looks to have all the tools. Getting the sort of exposure that comes with being part of Oscar De La Hoya’s Golden Boy set-up helps too, of course it does.  But Oscar is a shrewd guy and knows a good fighter when he sees one – and one that will excite the crowd.”

Quigley is also part of the Golden Boy stable as well and McCullough reveals their paths often crossed when the Donegal man was based in the States. 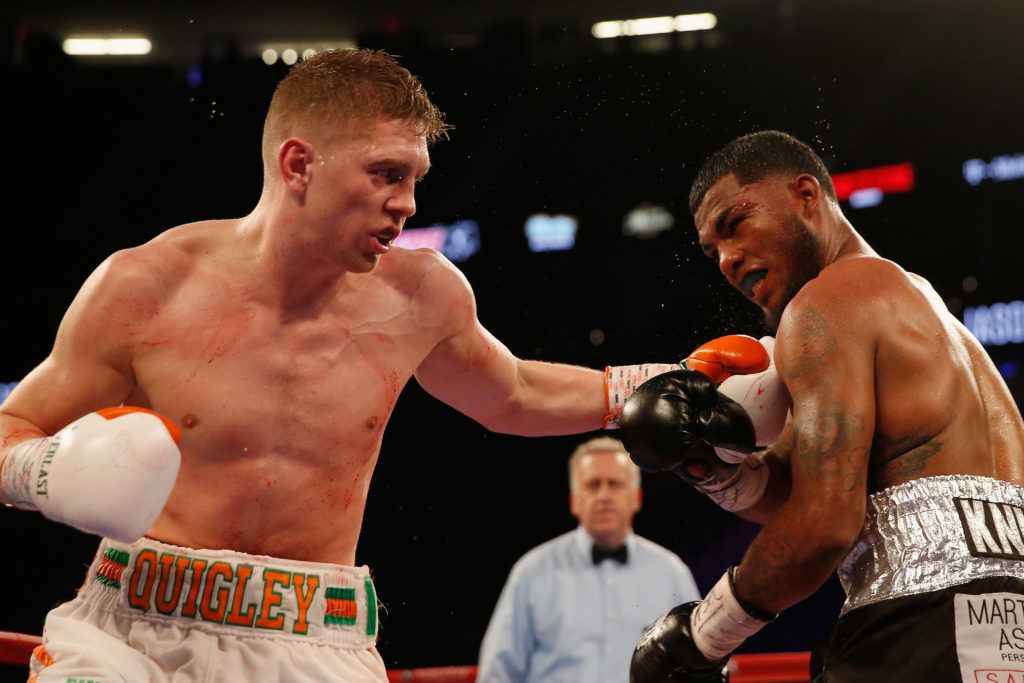 LAS VEGAS, NEVADA - MAY 16: Jason Quigley throws a left at James De La Rosa during the middleweight fight at T-Mobile Arena on May 7, 2016 in Las Vegas, Nevada. (Photo by Christian Petersen/Getty Images)

“He lived around the corner from me in Santa Monica at one stage and we would often meet up for a coffee,” McCullough said.

“Jason is living in the UK now as he wants to be closer to home. You will have some people criticising that. The biggest fights are here in America so in many respects you give yourself the best opportunity if you commit to being out here.

“But Jason has too much quality to be ignored wherever he ends up.

“The Glen Tapia fight made people here sit up and take notice. I think he sustained an injury in that fight that made him more cautious for a while. But there will be much more to come from him over the next few years."

McCullough has lived in the States for 25 years so he speaks from first-hand experience about the travails young boxers face when they up sticks and move.

“It was hard. I came here as a young kid in many respects. My wife was my girlfriend. She was 19 years old and we didn’t know one person in the country.

“But I was going to Eddie Futch in Vegas, so that was a no brainer for me.

“I am going to the Eddie Futch who was training Riddick Bowe the Heavyweight Champion of the World at the time? And the guy who had previously trained Joe Frazier, Ken Norton and Larry Holmes? 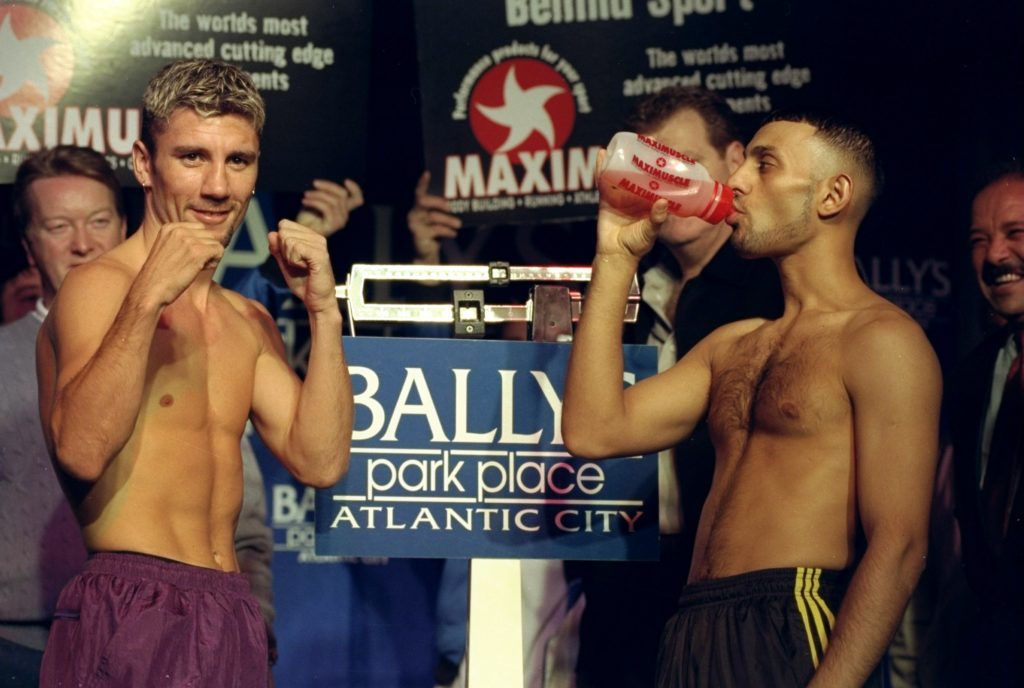 “For me to say no to that would have been nuts.

“But the first few years were really hard and I was homesick. My wife would say this is great for you. And the training was fantastic. But I was home more often. I was back and forward. I fought twice in Belfast and Dublin in the first year and next year I fought in Dublin again.

"I was backwards and forwards so much, so I wasn’t really getting settled in. So I sympathise with Jason and the other guys who head out here to make a go of it. If it wasn’t for my wife and daughter I’m not sure I would have stuck it out.”

McCullough fought for Ireland in the 1988 Seoul Olympics. But it was the success he was to enjoy four years later in Barcelona that made him a household name in Ireland and beyond.

“The Olympics is like a family event, everyone watches it. More than 50,000 people were in O’Connell Street the next day when we came back from the Olympics, myself and Michael Carruth. It is something I will never ever forget.
“But I can be in Ireland, USA or Japan and people will recognise me after 1992.

“Billy Walsh was the best thing that happened to Irish boxing. He was brilliant.

“He trained me like a semi pro and I loved that. We didn’t have any of the funding back then, but now the funding is in place and that is why Ireland have had more success.

In a stellar career, the Hall of Fame inductee fought the likes of Arturo Gatti, Naseem Hamed and Érik Morales. McCullough still enjoys the sweet science of boxing but in recent years has become more known for promoting UFC. It’s an unusual move for someone with his boxing legacy -and he has come in for criticism because of it. 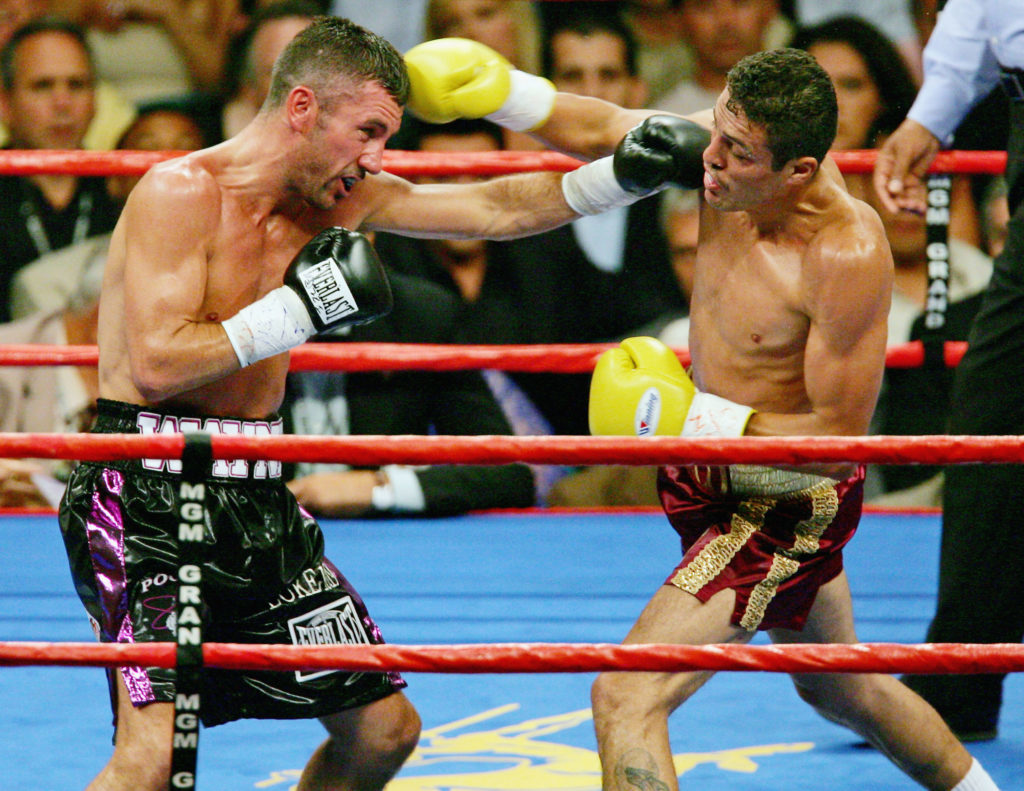 LAS VEGAS - : Wayne McCullough (L) and Oscar Larios exchange blows during their bantamweight championship fight on July 16, 2005 at the MGM Grand Garden Arena in Las Vegas, Nevada. Larios won the fight by TKO in the 10th round. (Photo by Ethan Miller/Getty Images)

“I love most sports, but MAA is a sport I have loved for a long, long time. I remember the first time we went to see it in Dublin in about 2009. I took a lot of stick for it, radio stations attacked me and boxing people really didn’t understand why I was getting involved.

“And I just said, you guys need to come and watch this.

“I do Jujitsu as well. I love it, I have been doing that for years. I would say to anyone, try to do at least one of the disciplines.

“Boxing is a big discipline and is one of the most successful ones. But increasingly today most of the undercard fights in boxing are complete mismatches.

“In MAA the boxers are maybe given $5000 to fight but if you win the fight you double your purse.  Those incentives are the type of thing boxing should look at.

“MAA/UFC fights are more or less 50/50, or 60/40 at worst. And that will be the whole card, the whole 12 fights. You would think boxing would have taken a leaf out of the UFCs book a long time ago but they haven’t.

“They’re not offering bonuses or looking at ways to innovate, so that explains why MMA has become as popular as it has.”