CELTIC manager Ange Postecoglou praised the character of his players for securing a 4-3 victory over Hearts, having twice relinquished their lead in Edinburgh.

In an incident-packed game following the introduction of VAR to Scottish football this weekend, Celtic were strongly tested by a depleted Hearts side in the seven-goal thriller.

However, left-back Greg Taylor was the unlikely hero after he popped up with a 76th-minute winner. 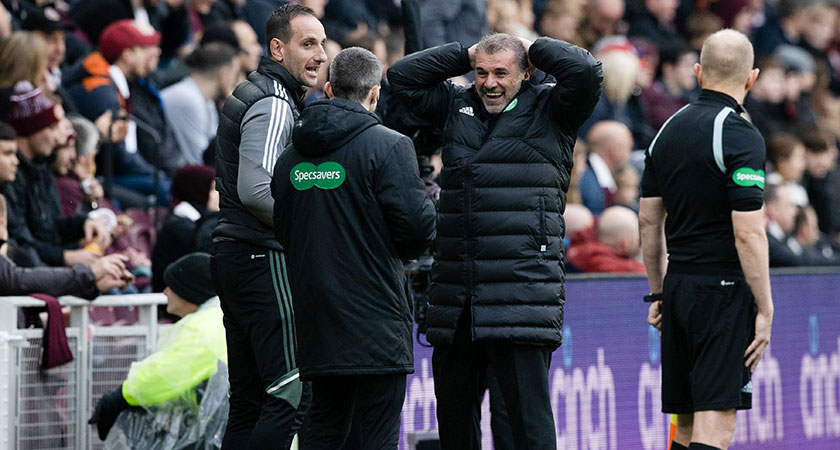 Postecoglou described the match as a 'cracking game' despite VAR threatening to steal the headlines.

"It was a cracking end-to-end game, that's what football is all about," he told Celtic TV.

"You'd like to control every game you play but that's never going to happen.

"I thought it was a cracking game, end-to-end stuff, a bit of theatre there with VAR that some seemed to enjoy.

"Overall, what really pleased me was, again, the players showed that character and resilience that we know is within them to find a way to win."

James Forrest opened the scoring on 14 minutes before Anthony Ralston had the ball in the back on the net, but only after referee Nick Walsh had blown the whistle.

Giorgos Giakoumakis appeared to push Orestis Kiomourtzoglou in the build-up and after a lengthy VAR check, play resumed with a free-kick to Hearts.

The home side were then awarded a penalty after Walsh overturned his original decision following a VAR review of a clash between Cameron Carter-Vickers and Cammy Devlin.

The American defender was within his rights to make the challenge but missed the ball and could have no complaints about the award.

Lawrence Shankland converted the penalty in first-half stoppage time but moments later, Postecoglou cut a bemused figure on the touchline as Walsh failed to award Celtic a spot kick after an apparent handball from Michael Smith, nor did VAR prompt the referee to review his decision.

Shortly after the restart, Shankland evaded Carter-Vickers to turn home Josh Ginnelly's cross to give Hearts a 2-1 lead.

Giakoumakis and Daizen Maeda struck within 10 minutes to restore Celtic's one-goal advantage but the Hoops were again pegged back after more VAR drama.

Hearts were awarded a penalty after Moritz Jenz had fouled Cammy Devlin and Ginnelly scored from the rebound after Shankland's penalty was saved by Joe Hart.

However, Walsh ordered a retake after VAR decided Ginnelly had encroached into the area.

Shankland made no mistake second time round to secure his hat-trick and make it 3-3, but Taylor secured all three points for Celtic after beating Smith to Liel Abada's deflected cross.

Postecoglou didn't seem too enamoured with either the introduction of VAR or its utilisation, however he praised his side for focussing on with the task in hand.

"It was pretty hectic and once VAR gets involved, the theatre comes along with it," he told Celtic TV.

"As I said, I'd much rather it didn't get involved too much and left the referee and just made the key decisions and made them quickly, but it is what it is, it's here now. 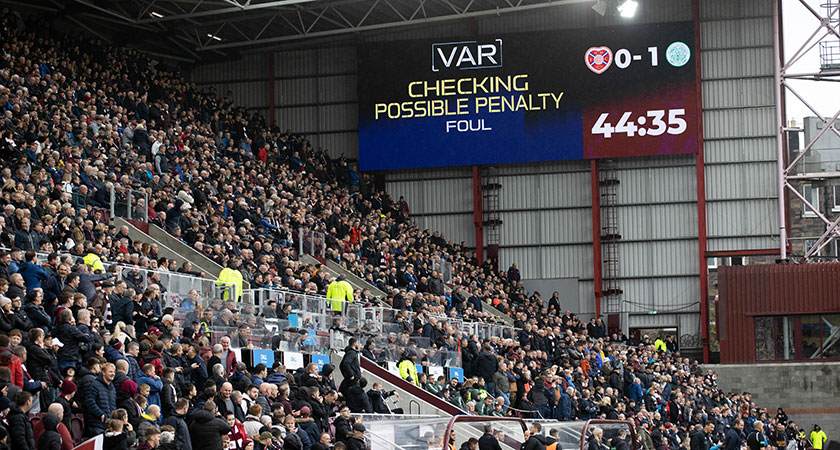 Celtic got their first taste of VAR after it made its debut in Scotland in Friday night's game between Hibs and St Johnstone (Image: Craig Williamson/SNS Group via Getty Images)

"But I think what was important for us is that we didn't get distracted by the noise and the theatre of everything that's happening and really tried to focus on our football and being disciplined.

"We had to do that today because it would have been easy to get distracted by everything else going on but the players maintained their discipline."

He added: "For us, what's important is that the football's one component but the character's the other component.

"If you want to end up being champions at the end of the year, you've got to show that at different times and I thought we did today."

Celtic host Shaktar Donetsk in the Champions League on Tuesday as they look to keep their faint European hopes alive, before travelling to Livingston in the Scottish Premiership next Sunday.