THE FALLOUT from off-field incidents that marred Celtic’s 5-1 derby victory over Rangers on Saturday has continued, with a Rangers supporters group calling for Celtic fans to be banned from Ibrox.

Rangers fans were accused of causing significant damage to a toilet block at Celtic Park, however the visiting supporters were themselves angered over alleged sectarian banners at Celtic Park and effigies wearing Rangers scarves being hung from the stands.

Rangers supporters group Club 1872 has now called on their club to ban Celtic fans from Ibrox "until Celtic can prove that they have taken substantive action against the Green Brigade and other overtly sectarian elements within their support".

Their statement said: "At the Old Firm game on Saturday the Green Brigade displayed sectarian banners which read 'Kill All Huns' and 'Know Your Place Hun Scum'. They also displayed banners in support of the IRA."

A Rangers statement in response said: "The club’s directors are fully aware of the disgust felt by Rangers supporters who were subjected to a sickening and shameful display of outright sectarian hatred towards them."

Meanwhile the Daily Record quoted a Celtic spokesperson as saying: "Celtic will not become involved in a tit for tat spat regarding all events at Celtic Park on Saturday.

“We will deal with all issues arising in a proper and professional manner in line with our well established policies." 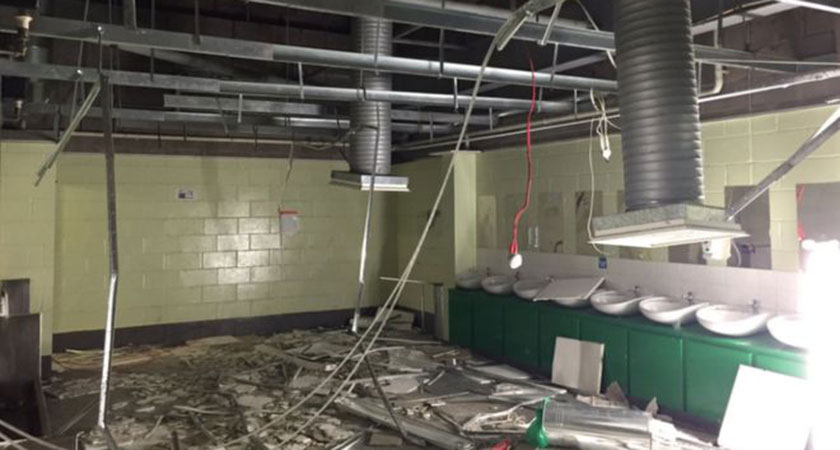 While Police Scotland confirmed it was aware of the damage, the Parkhead club were reported to be dealing with the incident as an internal matter.

Several Rangers fans condemned the vandalism on Twitter, with one user tweeting: “The idiots who wrecked toilets at Celtic Park do not represent most of Rangers’ supporters. Absolute disgrace.”

The idiots who wrecked toilets at Celtic Park do not represent most of Rangers supporters. Absolute disgrace. 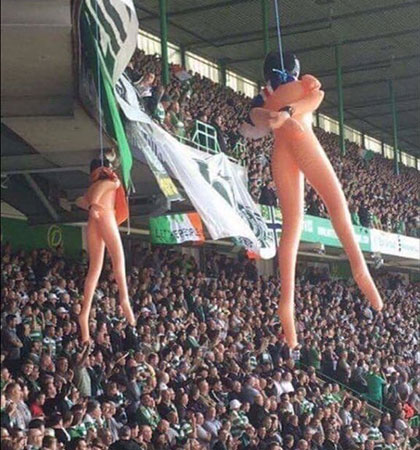 However there was also anger among the Ibrox club’s fans over images that appeared to show effigies in the home section hanging from ropes clad in Rangers scarves.

The blow-up dolls also appeared to have their hands bound behind their backs.

Meanwhile the @celticrumours Twitter account posted: “I'm sadly never surprised to see that we have scumbags in the Celtic end the same as any other club. The hanging dolls unacceptable regardless of motivation. Whether or not directed at anyone or anything in particular the lack of sensitivity is a disgrace.”

I'm sadly never surprised to see that we have scumbags in the Celtic end the same as any other club. The hanging dolls unacceptable 1/2

Regardless of motivation. Whether or not directed at anyone or anything in particular the lack of sensitivity is a disgrace. 2/2

Police Scotland confirmed there was one arrest inside the stadium, with a 22-year-old man detained over an alleged alcohol-related offence.

Asst Chief Constable Bernard Higgins, Justice and Support, said: "The overwhelming majority of those who attended the Celtic v Rangers game behaved responsibly and appeared to heed the advice given in the run up to the fixture.

“What is hugely disappointing and frustrating is that a minority of individuals behaved in a manner which has no place in our communities, football and modern society and which has resulted in Police Scotland carrying out investigations to identify those responsible."