Roy Keane: ‘When people say they are bored, it’s because they’re boring’

ROY KEANE has dismissed suggestions that the Republic of Ireland squad will suffer from boredom whilst on duty at Euro 2016 in France.

During the last Euro campaign in 2012, there were some suggestions that players found it hard to find ways to fill up their spare time and grew increasingly bored as the tournament wore on.

However, Keane, who travels to the Euros as assistant to manager Martin O’Neill, believes the squad need to be more creative with their spare time, citing how he used to keep himself occupied when he was a player.

“What did I do when I was a player? Played cards, watched television and listened to a bit of music. Read. Ring home,” said the 44-year old.

“I think there’s been a big thing made of this boredom thing. We give the players decent freedom, whether it be going out for coffees. I think we’re in a nice location, they’ll have freedom to stroll around.

“Usually when people say they’re bored, that’s because they’re boring. Most people who say to me they’re bored. I look at them and I’m thinking, ‘You look boring alright.’ You have to think outside the box. Go for a bike ride. Go for a swim. Chat with the staff.”

Last week, Keane caused controversy for stating that he wanted to “kill” players because of their attitude during the defeat to Belarus whilst also suggesting that some of the squad, namely Aiden McGeady, were fortunate to be on the plane to France. 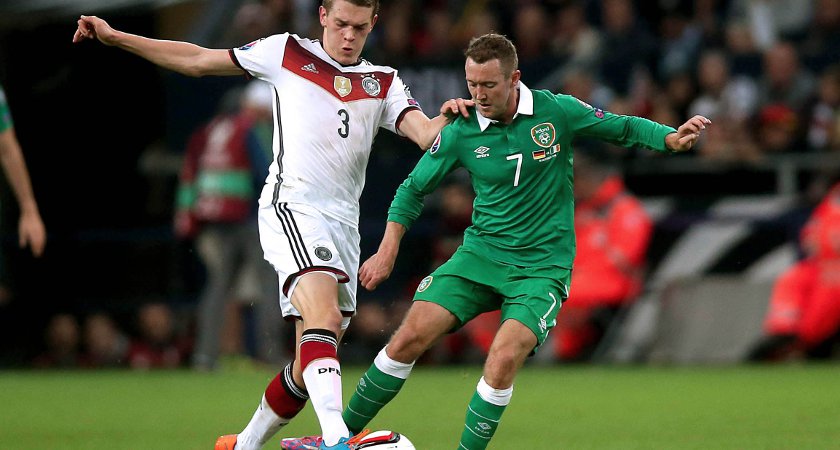 Keane suggested McGeady, right, has never delivered on his potential [Picture: Inpho]
The Cork native has since admitted the comments were too strong, yet cut down reporters who asked him if he had regretted what he said.

"If I think I've gone over the top on certain things, I will apologise, I've no problem with that.” said the former Manchester United player.

“I've done it before. I've pulled players in at Sunderland and at Ipswich. I remember it like it was yesterday. Pulling a few young players in that we had on loan from Tottenham. I was really hard on them in training and I pulled them in afterwards and I said, 'I was over the top' and they were fine.”

"Sometimes you get messages out here and you try to find different ways to motivate people. Sometimes it works and sometimes it doesn't. People on the outside might take it up the wrong way. If I feel I have crossed that line with anything - it doesn't have to be in football, it can be away from football – then you have a word with people.

"It certainly happens when you are married to somebody. I'm sure everyone can identify with that.

“My job is to motivate players, to push people and try and get them to another level. That will never change. I'm sick of saying it, but I have been like that since I was a young player.

"I'm not going to sit here and talk about things I said and regret. No. You're not therapists to me. This is to do with my own conscience.”