THE session had come to an end when Roy Keane gestured the players towards him.

It was May, the final weeks of the Irish team’s preparation for the summer’s European Championship finals and that anxious stage just before the squad was cut down to the final 23-man travelling party, when men were wondering if their passports would be stamped or not.

So when the call to attention came, there was an immediate rush to please and to crowd around a man a couple had played with and others had worshipped.

Silently they stood there, forced to tilt their heads forward to hear Keane clearly, surprised by the fact he initially spoke quite softly. “Don’t think they’re better than you,” were the first words he said. “Don’t go across there with that attitude.”

A few weeks later, the day before the Italy game, in a cramped room at the side of a gymnasium in Versailles, where the Irish team was based, he spoke in more depth to the press about attitude and how he and O’Neill were trying to alter the mentality of the team. “We want to be thinking we should be reaching semi-finals, not coming home early,” Keane said.

What we didn’t know then was what he had already said to the players three weeks previously in Fota Island, the venue for Ireland's training camp. “It was amazing,” one player who hung on Keane’s every word on that sunny afternoon, told The Irish Post last week. “The best football speech I’ve ever heard.”

Repeating verbatim what the players heard is impossible. None of them had voice recorders or notepads to record the moment. Yet his words were inked into their conscience.

“It was all about respect, all about hunger," the player said, "all about how we had to forget …….  or to quote him properly … how we had to f****** forget about reputations, to not give a f*** about the fact they played for Juventus or Chelsea or Manchester City or whoever. We were told dead straight that we’d get results, that playing for our county mattered more to us than it would to anyone else. He spoke about his own career and how he knew that some f****** on other teams just went through the motions in international football, but how Irish boys never did that. How we always tried harder, cared more. ‘Go and do that,’ he told us. ‘See how far it’ll take you’.

I’m tellin’ ya, by the end of it, I was bursting to just go out and play there and then. It was an unbelievable team talk.

Knowing all this, the subsequent performances make a little more sense. Ireland did play with more passion than the Swedes, and particularly the Italians. Results there ensured their progress out of the group and into the round of 16, where they rattled the French for an hour before running out of gas.

A mixture of Keane’s intent and Martin O’Neill’s intuition had seeped through. Whatever about changing the mentality of Irish football, they’d clearly changed the thought processes of this team. Under Giovanni Trapattoni, they stood for the national anthem and that was about it.

Under O’Neill and Keane, though, what they stood for in France is what we love about Irish sport: the have-a-go attitude that anything is possible.

And all of a sudden a connection between the fans and the players re-occurred. Years of declining interest and declining crowds were forgotten.

This was a team the public could engage with. No one, for the first time in years, mentioned their inflated salaries or whether they were disinterested underachievers.

Instead they referenced their commitment and self-belief, how they’d come back from a 3-0 hammering to Belgium to beat Italy with a late goal. 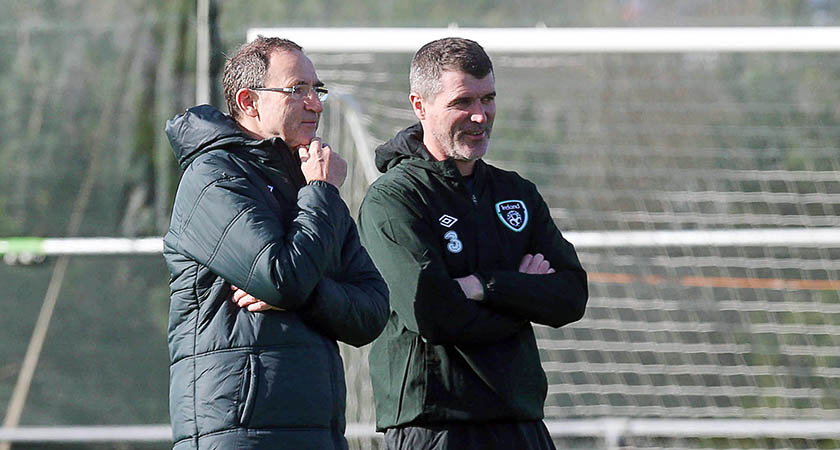 Martin O'Neill and Roy Keane are preparing for Austria [Picture: Inpho]
And that was a recurring theme. Scoring late, game-changing goals had become part of the team’s DNA. There was that last minute equaliser from John O’Shea against Germany; the 90th minute winner by Aiden McGeady in Georgia; the stoppage time equaliser by Shane Long against Poland. Then Robbie Brady in Lille.

And those four words seem to define his era. They chase lost causes – whether in the qualifying group when Scotland had stolen a march on them, before falling apart in the run-in – or in the finals itself, when the 3-0 defeat to Belgium seemed to signal the end, but proved to be just a comma, rather than a full stop.

Keane’s words at that training camp - “you’ll care more than they will”  - came back to them. And everyone left France happier with both the team and themselves.

So fast forward to now.

The party is over and the sporting hangover is in. A World Cup campaign has begun. Summertime trips to Paris, Lille, Bordeaux and Lyon – have been replaced by in and out stopovers to Belgrade, Chisinau and now Vienna this weekend.

The anticipation of playing against Serbia, Georgia, Moldova and Austria hasn’t been there. Nor have the crowds. Fifty thousand Irish people visited France during the Euros but just over a thousand fans made it to Serbia and Moldova. 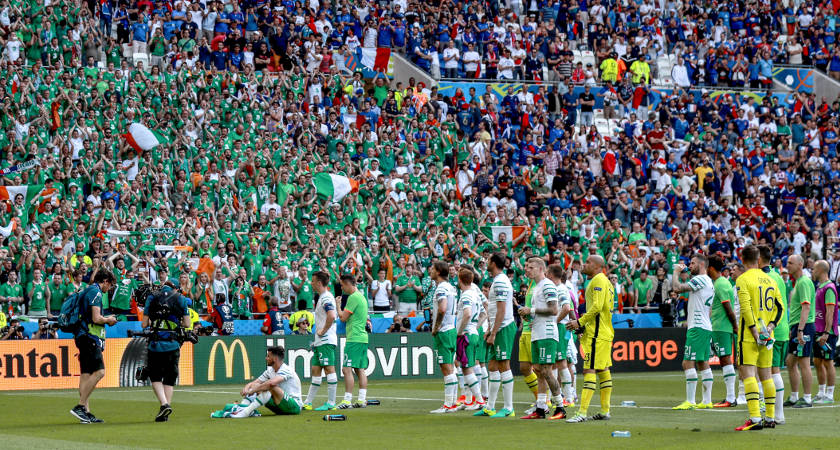 Ireland fans travelled in their masses to Euro 2016 [Picture: ©INPHO/James Crombie]
Clearly their money has run out and it seems a certain amount of patience has too, surprising given the results, less so because of the performances. “Are you concerned about the number of times we are giving away the lead?” O’Neill was asked by Tony O’Donoghue, the RTE soccer correspondent after the Moldova game. Taken aback, O’Neill went on the defensive – just as his team has a tendency to do when they’ve nosed in front during matches.

Think back to the last European campaign. That late winner in Tbilisi? It came after Georgia had cancelled out Aiden McGeady’s initial goal in that game? Then after coming from behind to draw against Germany and Poland, Ireland coughed up a lead, and two points, against Scotland. They lost the lead again in Zenica against Bosnia, then in Paris against Sweden, Lyon against France, Belgrade against Serbia. By the time a 1-0 advantage turned into a 1-1 scoreline in Chisinau, O’Donoghue was clearly noting a chain of events. The question was merited.

As was O’Neill’s – albeit bristly delivered – answer. Yes, Georgia and Moldova had fought their way back into matches, but Ireland still won those two games. Furthermore, when they took the lead against the world champions in Dublin, Germany couldn’t find a way back into it. Nor could Bosnia when they came to the Aviva a month later, nor Italy after Brady’s 84th minute header.

“Games take on a life of their own, sometimes,” O’Neill said. “Remember, Serbia have some excellent players, and were playing at home. Getting a draw out there was a good result. Austria didn’t draw in Belgrade. Remember, too, we beat Georgia. Scotland didn’t do that in Tbilisi. Wales also drew with them. Georgia are a good team.”

And Austria are a much better one. Though the start to their campaign has been poor, they won’t be viewing Ireland’s visit with any trepidation, not least because Shane Long, the first-choice striker, is out, as is his deputy, Daryl Murphy. Minus a focal point, they’ll have to turn to Jon Walters, who may have been the talismanic figure in the last campaign but who has been barely getting a game with Stoke this season. A door, therefore, may open for the half-forgotten, Kevin Doyle.

“Kevin has good chance  (of featuring),” O’Neill said. “Barring injury, he’ll be with us.”

As will Harry Arter, in spite of the groundless rumours which circulated last month that he was about to defect to England. 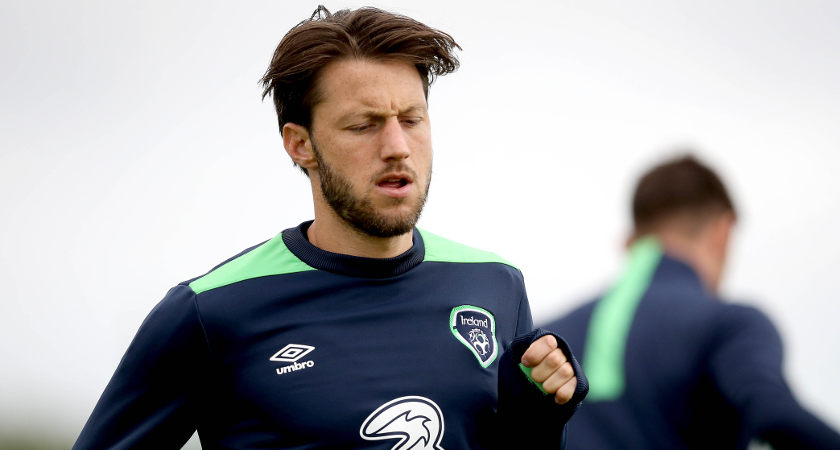 “Harry is a fine player, he is doing really well,” O’Neill said. “I saw him against Watford the week before and I said to him that it wasn’t his best game. Sometimes people get a wee bit carried away (hyping players up) but thankfully, Harry isn’t getting carried away with all the accolades being bestowed on him, which is good.”

O’Neill too isn’t getting carried away. Results have been good thus far but he has been around long enough to know they can quickly change.

“We’ll go to Vienna with confidence,” he said, “but you kind of feel so much (of whether they qualify or not) will depend on what happens next year in the Aviva.”