GREG TAYLOR said he has 'loved every minute' of playing for Celtic after he marked his 100th appearance for the club with a goal.

And after the 3-0 win at Livingston, he credited manager Ange Postecoglou for revitalising his Celtic career by playing to his strengths.

Having never scored in the league for Celtic, Taylor now has two goals in as many Premiership games, while his effort in West Lothian would have made Celtic's strikers proud.

"It's a big achievement for myself managing to play 100 goals for this club," Taylor told Celtic TV.

"I've loved every minute of it and to top it off with a goal today was a nice added incentive.

"It's going well as a team, we've been pretty strong in the league.

"It's a tough place historically for us here and I think it was a real professional performance by all the lads."

Taylor's strike came either side of efforts from Kyogo Furuhashi and Jota, while Celtic could also afford the luxury of a missed penalty from Giorgos Giakoumakis.

However, it's been a difficult road to the first team at times for Taylor.

His debut season began in stop-start fashion due to a thigh injury and the form of other players as Celtic chopped and changed as they looked to solve the problem left by Kieran Tierney's move to Arsenal.

Then, after establishing himself in the starting XI midway through the season, the campaign was curtailed by Covid-19. 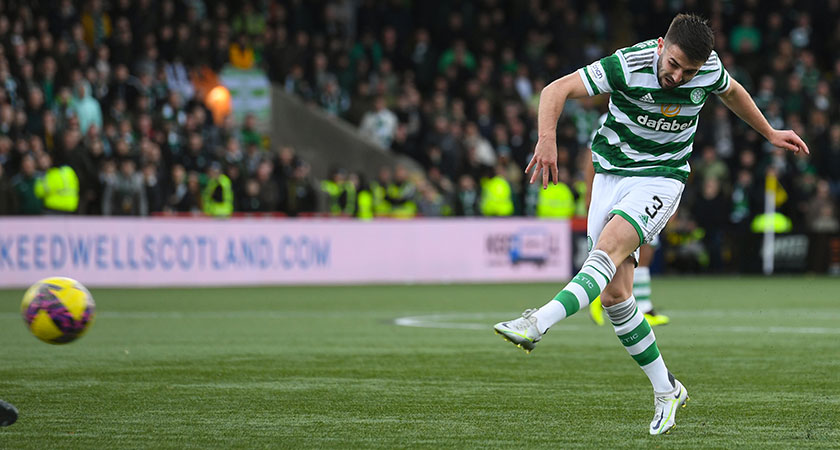 Taylor again found himself in and out of the team the following season as Celtic's bid for 10 in a row faltered.

He was a virtual ever-present in the early part of last season following Postecoglou's arrival in the summer but the bright start was halted by a shoulder issue that required surgery and a near three-month lay-off.

However, after helping Celtic claim a clean sheet in a 3-0 win at Dundee United upon his return to the starting XI last December, he hasn't looked back.

He went on to help Postecoglou secure the title in the manager's debut season and is arguably the first name on the Australian's team sheet.

'I have a manager who trusts me'

Taylor credited the manager with his success, saying he and the boss are singing off the same hymn sheet.

"You always aim to be a success wherever you go," said Taylor.

"It took a wee bit of time to get that status of playing regularly, getting that run of games.

"But now I've got a manager who really trusts me, who has a philosophy and a way of football that suits my game and it's one that I really enjoy playing in.

"I'm grateful to him, he's the one who gives us the opportunities and when you get them it's just about taking them." 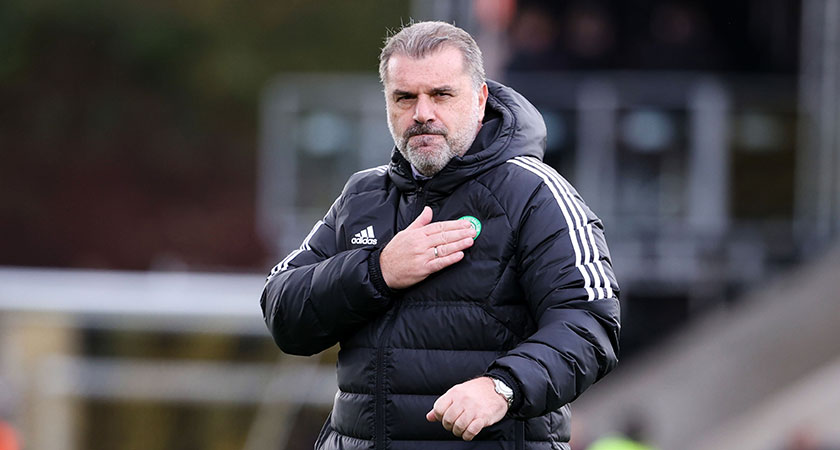 Ange Postecoglou said he was pleased with how Taylor has progressed at Celtic (Image: Alan Harvey/SNS Group via Getty Images)

The manager in turn praised Taylor's development since his arrival, saying the left back is always looking to better himself.

"With all of our players the pleasing thing for me is that they're always improving.

"That's what we want, that's why we keep pushing them and don't put a limit on what kind of player they can be.

"Now he's getting goals, which is great — he's a threat there and I'm pleased for him."

Celtic are next in action on Wednesday when they take on Real Madrid in their final Champions League group game, kick-off 5:45pm BST.