'We go right to the end': Postecoglou credits players after Giakoumakis hits 95th-minute winner for Celtic

Giorgos Giakoumakis is mobbed by Celtic fans after his winning goal in the 95th minute (Image: Ross MacDonald/SNS Group via Getty Images)

CELTIC manager Ange Postecoglou praised the resilience of his players after Giorgos Giakoumakis hit a late, late winner for Celtic on Saturday.

The Greek striker's goal in the 95th minute against St Johnstone came just two-and-a-half minutes after the hosts had equalised and appeared on course for a share of the spoils.

However, Celtic snatched the points at the death to consolidate their position at the top of the Scottish Premiership. 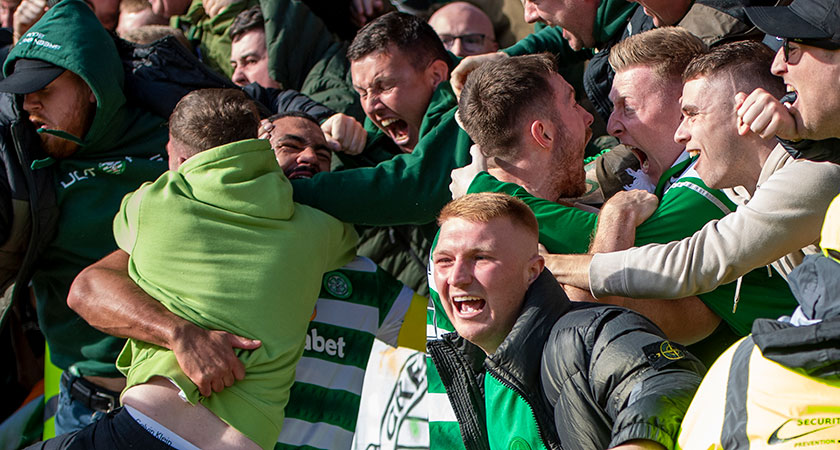 "It's a game we really should have put to bed a lot earlier, we had the chances to do so," Postecoglou told Celtic TV.

"At 1-0 they're always in the game, they throw a lot of balls into the box, there are a lot of big bodies and it doesn't take much for them to get one over the line.

"It's the fact it happened so late in the game, it was going to be a real challenge for us.

"But we did it a few times last year and we're going to have to do it this year — not every game is going to run the way we want.

"We're going to have to show that character and resilience to get over the line when we need to and credit to the boys, they did that."

Celtic spurned several chances to secure the points after a first-half own goal from Andrew Considine.

Liel Abada ballooned an effort over before Considine's error, while the Celtic winger was denied by Remi Matthews midway through the second half.

Giakoumakis and Daizen Maeda also had efforts ruled out for offside.

However, St Johnstone were carving out chances of their own, Stevie May denied by the outstretched hand of Joe Hart while Connor McLennan should have done better with the goal at his mercy.

The host's endeavour appeared to have brought rewards when Alex Mitchell was left in acres of space to control Ali Crawford's lofted free kick into the box before firing beyond Hart.

However, Giakoumakis sparked wild celebrations among the visiting support as he turned in Alex Bernabei's cross, which came after Ireland's James McCarthy chased down an apparent lost cause with seconds remaining.

Postecoglou — famous among the Celtic fans for his 'We Never Stop' maxim coined in his first week of training — said that never-say-die attitude typifies his squad.

"We've tried to instil in them from day one that irrespective of the score line you go right to the end," he said.

"We always score or we're always a threat late in games irrespective of the score, so when we do need a late goal we don't have to change our approach, we just stick to what we do. 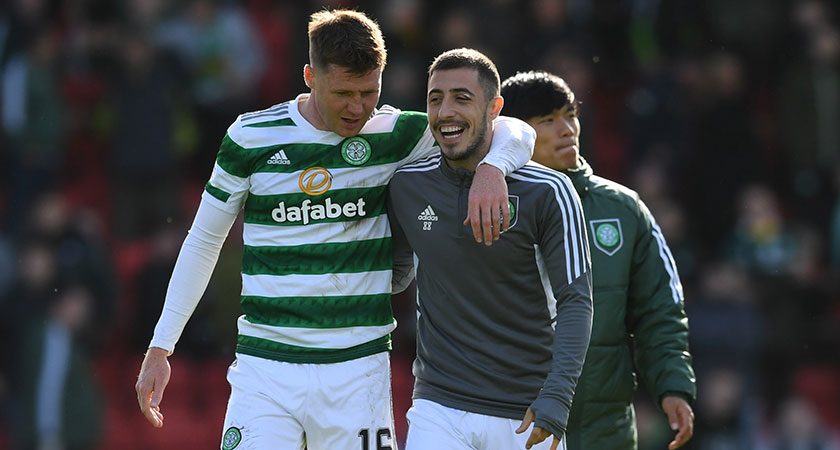 Ireland's James McCarthy, who was instrumental in Celtic's winner, with Josip Juranovic after the game (Image: Ross MacDonald/SNS Group via Getty Images)

"I think that helps us. If we're a different type of team and all of a sudden you need to switch on to try and get a goal in some way, then it makes things more challenging.

"But our guys know what they need to do — right to the final minute we play our football, we go at the opposition and we got the goal today."

Celtic are next in action in a crucial Champions League game at home to RB Leipzig on Tuesday, kick off 8pm.