Members of the Ceann Creige Hurling and Camogie Club in Glasgow

CEANN CREIGE Hurling and Camogie Club in Glasgow is the world's newest GAA club, but it's already making a firm mark.

The club recently held its first underage awards, kindly sponsored by C&P Management – with over 100 people in attendance.

It comes as the club have secured funding from the National Lottery Community Fund Scotland to support their new Hurling into Schools programme, which will introduce hurling and camogie to more than 2000 kids in seven schools in the East End of Glasgow with weekly sessions.

The programme will run from January to October next year. Ceann Creige PRO is Sarah Jane McGeown – the Armagh native is in Scotland seven years and says there has already been a great response from local schools. 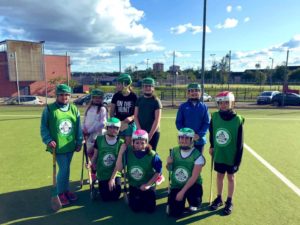 “With the schools we have made great links. It's difficult too, but the people we have made the links with are great sports people,” she told The Irish Post.

“If you have got someone willing to give you a chance and an opportunity – that's all we want. We have been very lucky with the people that we have got in contact with because that drives something.

“Through social media other schools can see that. We contact them and the next thing we are in the door. It's just about building those connections with the right people.”

McGeown says already they have seen a huge interest among people with no Irish connections.

“Most of our players have no Irish roots and never heard of the game before,” she said.

“It means that they are coming to join our club, because they actually want to play the sport – they aren't made to.

“There's something there that people really want to get stuck in and we are delighted with that. We are obviously doing something right!”

The adult Camogie team took part in their first ever blitz at Naomh Eanna in Antrim, and reached the Cup final only to lose out by a point – not bad for a new club on the block.

“We have some players are our from Glasgow, and we also had a player from India who came over with us as well and she is absolutely brilliant,” Sarah Jane said.

“Before we went over we said it's a team-bonding trip and nice to play some Camogie, but when we got there it was so well organised. There were different levels of competition. We won our first match, and done really well. We got into the Cup final, and just beaten by a point.

“When you are playing that competitive streak comes through, and you just want to take the Cup home – something we never would have dreamed of beforehand.

“Even from that trip, you can see us even closer than before.

“That's what it's all about – improving, and also that social aspect of it as well is really important for our club.” 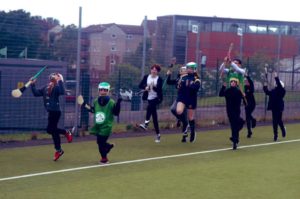 Members of the Ceann Creige Hurling and Camogie Club in training

The men’s hurling team is one of the newest in the club, and they hold a joint training session with the Camogie team.

“They coach with us on a Wednesday evening. Numbers were pretty amazing from the start. We are looking at getting them playing in the league competitively next year.”

The club are looking for people to get involved on and off the field.

You can find them on Facebook at Ceann Creige Hurling and Camogie Club.