ONE thing the wall-to-wall coverage of the recent death, period of national mourning and state funeral of Queen Elizabeth II did was remind the world of the beauty of London.

The capital, in all its regal glory, was central to most of the proceedings in the wake of the death of Britain’s longest-serving monarch - and it looked amazing.

So as the world watched on in awe at the spectacular pomp and pageantry that comes with laying a Queen to rest, they also got to see the best of the city, which provided a more than adequate backdrop for such a significant historic event.

As a result, we can surely expect a visit to London to be back on the ‘to-do’ lists of people across the world in the months ahead.

For those of us based slightly closer to the English capital, now is the perfect time to get your own staycation booked in and visit - or revisit - a city which is steeped in tradition, bustling with activities and home to some of the best hotels, restaurants and attractions to be found across the globe.

Just a week after the funeral of Queen Elizabeth II I ventured back into the city.

The streets, far quieter than they had been seven days prior, were back to their usual scenes, although the remnants of the mammoth occasion only just passed were still there to be seen.

Many of the shops still had their tributes to the Queen in their windows, and there were still plenty of Paddington Bear teddies dotted around too.

But there was a sense of celebration also, with reference to the new King becoming a more familiar sound and sight in the streets of the capital.

We headed right to the heart of the shopping district for a short stay at the beautiful Marylebone-based Hyatt Regency London – The Churchill hotel.

This, as the name suggests, has been inspired by Winston Churchill's life and career as one of Britain’s most famous prime ministers. 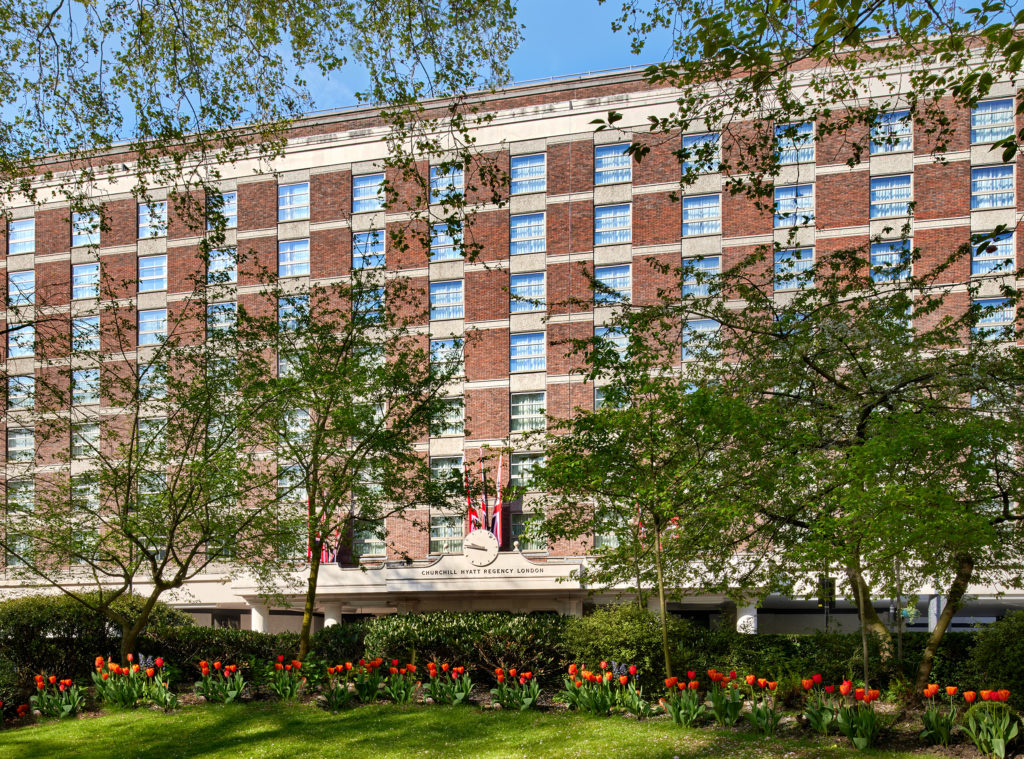 It felt fitting that we would stay somewhere with such an historic theme in a period of time where history was being made anew in the capital.

And we were more than happy with our chosen destination.

The Churchill is perfectly located just a few minutes’ walk from Marble Arch tube station and most of its elegant bedrooms overlook the gorgeously green and leafy Portman Square.

Subtle references to the life and career of Churchill are found throughout the interior décor, which is elegant and understated, but luxuriously comfortable too.

Widely considered one of the 20th century's most significant figures, Churchill was the British prime minister from 1940-45, during the Second World War.

As a result, he is remembered by most as a victorious wartime leader who played an important role in defending Europe’s liberal democracy against the spread of fascism.

And he would go on to serve as prime minister once again, from 1951-55, which put him in regular contact with the late Queen. 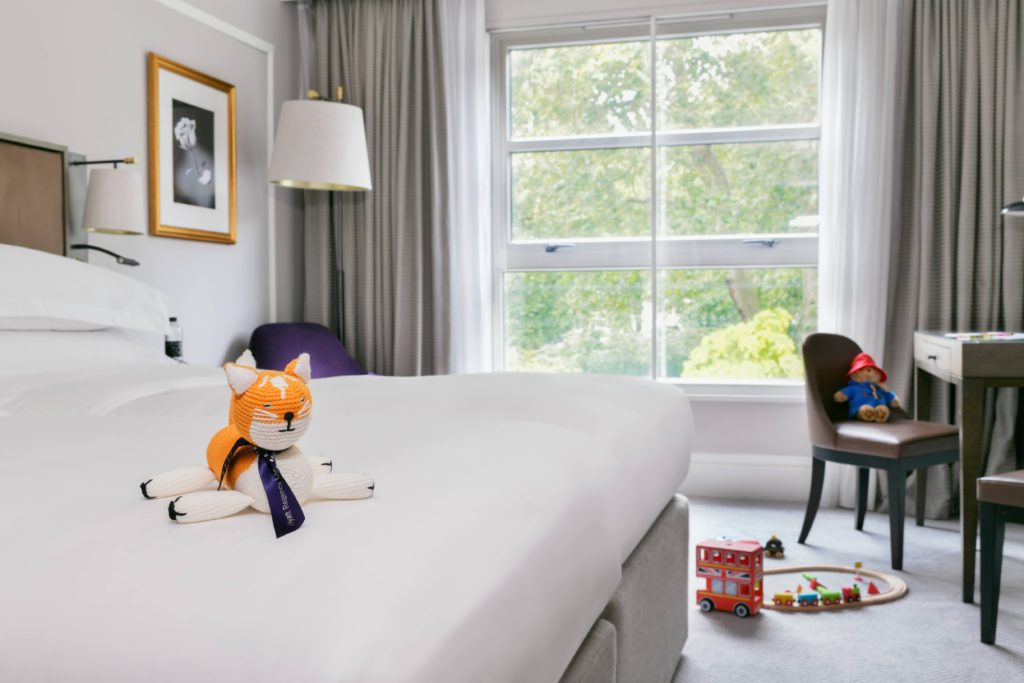 Churchill was the first of 15 prime ministers to work with Queen Elizabeth II during her more than 70-year reign – with their professional relationship beginning when she ascended the throne in 1952.

Another notable connection between the two British leaders is that prior to the Queen’s, the last time a state funeral took place in the capital it was for Churchill himself.

The formidable leader was given the honour following his death in 1965, which saw the streets of London illuminated in elaborate ceremonial displays similar to that which we witnessed just last month.

Understandably, reference to such significant moments in Churchill’s life – and death - are to be found throughout the hotel.

But so too are nods to some more personal elements of his character.

For instance, as a renowned animal lover, Churchill was known to enjoy the company of his pets, in particular his dogs and cats.

This affection is effectively represented in the décor found throughout the hotel’s bedrooms and hallways, which boast artwork and wallpaper inspired by both animals.

There was even a hand-knitted toy cat adorning our bed when we arrived, which was an unexpectedly nice touch.

But while there are plenty of interesting Churchill-related nuggets to explore within the hotel there is also so much to do outside the building - so we eventually took ourselves back out to the streets.

With the choice of bustling Oxford Street or the quaint Marylebone Village on its doorstep, The Churchill hotel is the ideal spot from which to explore the city. 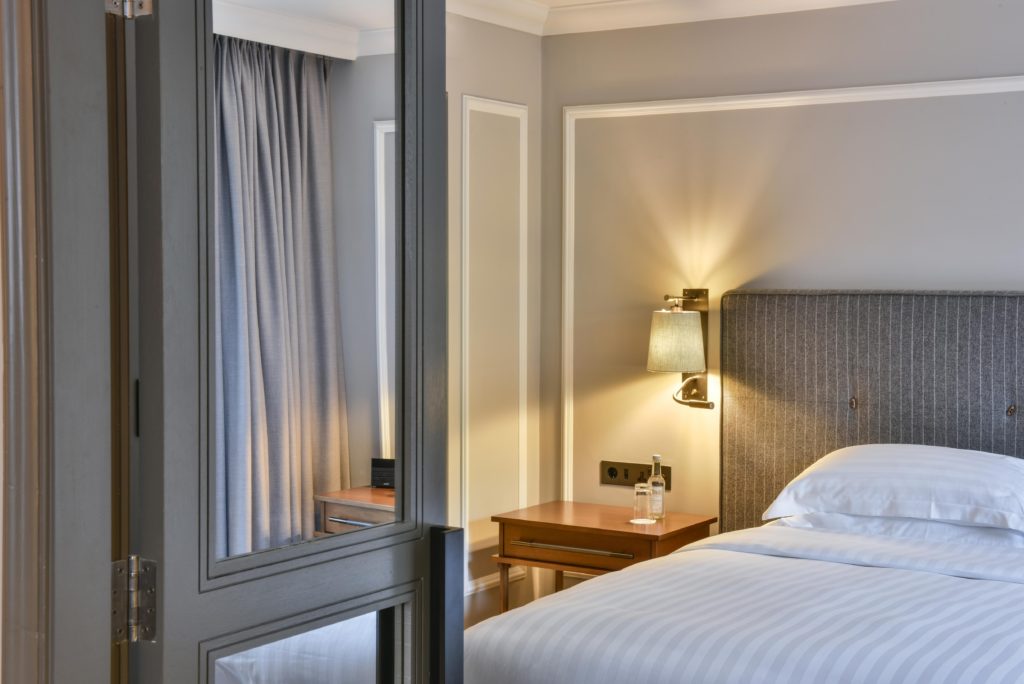 Elegance, comfort and luxury is to be found throughout the hotel

If you are after shopping, Selfridges, Bond Street and Regent Street are all just a short stroll away.

If you want to enjoy the more naturally developed outdoors, the capital’s parks are a short distance away too, with Hyde Park and Regent’s Park particularly close by.

If you’re not sure what you want to do, why not try a little of everything.

The Churchill has recently launched a luxurious staycation package entitled Marylebone Moments, which includes a Hidden Marylebone walking tour through the local urban village with a local Blue Badge guide to direct you on the way, followed by an indulgent picnic in the park.

The tour gives you the opportunity to learn more about the affluent area, which really is one of London’s hidden gems.

It delves into the history of Marylebone with a visit to traditional London bookshop Daunt Books, Barley Mow in Dorset Street, which unusually features Victorian drinking booths, and a walk through the elegant Georgian squares, such as Portman Square, which is located directly across from the hotel; and 34 Montagu Square, which was the former home to three members of iconic British band The Beatles, as well as the legendary American rock guitarist, Jimi Hendrix.

During this tour, you get to see where they lived at 221B Baker Street, and some of the other locations that featured in their adventures.

Other tours on offer as part of the Marylebone Moments package include a Beatles Tour, a Women of Marylebone Tour and the Marylebone Architecture Tour, so there truly is something for everyone.

And after our day of exploring, we were only too happy to return to the comfort of the hotel and enjoy an evening of cocktails and high-quality cuisine.

We began our night sampling handcrafted, sustainably created cocktails from a seat by the roaring fire at the Churchill Bar and Terrace – where the drinks are as impressive as the setting.

There are 12 cocktails to choose from on their sustainable menu and each comes with its own back story and attempt to address an environmental issue.

“We feel it is important to take small but effective steps towards a more sustainable lifestyle and want to showcase and celebrate ways to do this through our delicious and unique new cocktail list,” The Churchill explains.

“Each signature cocktail is inspired by a prescient environmental cause,” they add, “while making use of responsibly sourced ingredients and materials.”

For instance, the Wasteless Martini, a delightfully sour gin-based cocktail that comes with fortified fennel sherbet and scrappy’s lemon bitter, uses the part of the fennel that the hotel’s restaurant would otherwise discard.

They use the leftovers to create their very own fennel sherbet, which goes into the drink, and is utterly delicious. 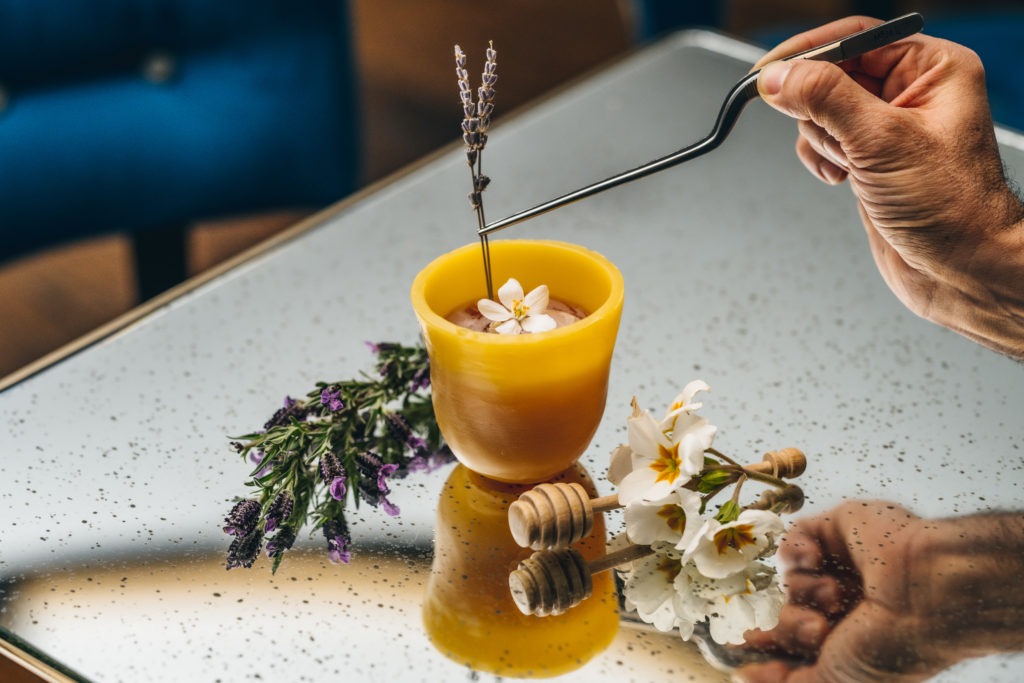 Elsewhere their Be Hive offering, a mellow and floral pre-dinner cocktail, surrounded by sweet pollen, is particularly striking – as it is served in a 100 per cent beeswax cup.

The cocktails are both super tasty and good for the environment, so everyone, seemingly, is a winner.

Dinner was an equally enjoyable affair, with the team at The Montagu Kitchen attentive and only too happy to ensure myself and my dinner guest, who is vegan, were fully informed of the options available to us, while offering useful insight and recommendations on what to order.

We opted for a banquet of starters, which would have been enough for the whole evening, particularly their rosemary sourdough bread and oils and an even tastier Rainbow Hummus, which consisted of three large plates of beetroot, red pepper and regular chick-pea hummus, all bursting with colour and all delicious.

Mains were also devoured with ease, with a wild Cornish seabass for me, suitably accompanied a shallot puree and chicken broth, and my guest enjoying grilled heritage carrots with leek and crispy onion and a range of flavoursome vegetable side dishes.

This was a dinner to be reckoned with. Fit for a Queen, or Prime Minister, for that matter.

And it was the perfect end to the ultimate city staycation.

Rooms at Hyatt Recency London – The Churchill start at £450 per night. For more information and booking email [email protected] or click here