Brought to you by Tourism Ireland. Coming to Ireland for New Year's? Be sure to book an unforgettable New Year's Eve in Dublin by visiting www.nyfdublin.com

IRELAND is a first-class destination for outdoor activities.

Its coastline, rivers and loughs provide endless opportunities for watersports, while inland the mountains, hills, moorland and forests are ideal for a variety of energetic activities from hill-walking to orienteering.

The number of activity holidays Ireland can offer continues to grow — from surfing in Co. Sligo to horse- drawn camping holidays in the quiet byways of Co. Leitrim, there are myriad opportunities for adventure.

Dinghy sailing, horse-trekking, rock-climbing, whale watching — there’s a wealth of activities to choose from. You’re sure to find an adventure that could transform your holiday, and — who knows — maybe even your life.

Ireland’s mountains will leave you breathless in more ways than one as you stride through heather and history. There is a huge expanse of countryside – mountains, moorland, bogland, coastline and woodland – where you can wander all day.

Macgillycuddy’s Reeks – Ireland’s highest mountains – offer the toughest challenges, but the Slieve Blooms (mostly in Co. Offaly), the Bluestack Mountains (Co. Donegal), or the Mournes and Sperrins in Northern Ireland provide everything from demanding climbs to pleasant rambles.

And if that wasn’t enough, there are a total of 179 different walks to choose from on Ireland’s Wild Atlantic Way. These routes were made for walking! 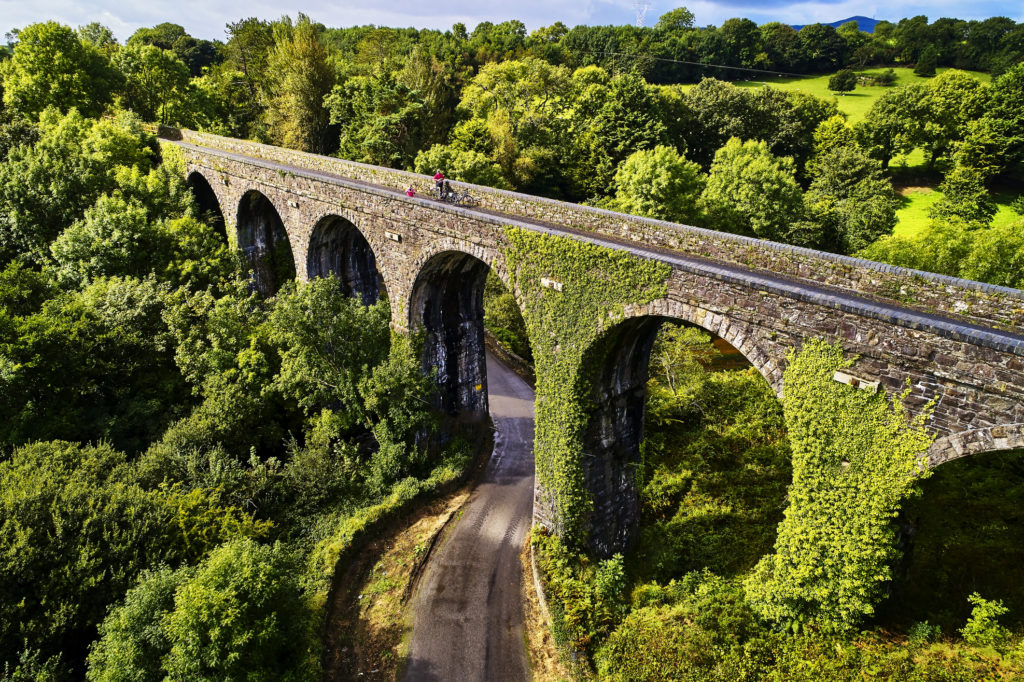 Cycling in Ireland is a delight: every county has quiet byways ideal for a two-wheeled odyssey. Today there are also ‘greenways’ – off-road routes for cyclists and walkers, often created from the routes of the old railways.

The greenways are an elemental way to travel; you’ll feel the mountain breeze on your face, smell the sea, and breathe in the scent of meadowsweet. These routes criss-cross extraordinarily beautiful countryside in every part of the island.

The Waterford Greenway arrives at Dungarvan Bay before visiting Norman castles, ethereal monasteries, welcoming villages – all are part of the tapestry of this region. The Grand Canal Way begins in Dublin city centre and heads west to the River Shannon, while the Comber Greenway runs from Belfast to Comber along the old railway line. In the midlands there is the Old Rail Trail in Westmeath which provides idyllic views of Ireland's Hidden Heartlands and connects two of the regions biggest towns - Athlone and Mullingar.

In Mayo along the Great Western Greenway the views across Clew Bay are dramatic. This is Ireland’s original greenway, stretching across the county, finally reaching Achill Island.

At 2,500km in total, the Wild Atlantic Way is just as navigable by bike as it is by car and offers a wide selection of cycling experiences for two-wheeled enthusiasts.

The Atlantic seaboard faces the full force of the ocean – excellent news for whitewater fans. The award-winning surfer’s paradise of Rossnowlagh and the white horses of the Bloody Foreland continue to draw surfers and wind-surfers from across the globe. Wind, as you might imagine, is never really a problem. There can be few more enticing days than braving the waves followed by an evening in front of the fire with a hot whiskey in your hand – surf, turf and toddy.

Ireland’s watery parts provide a wealth of sports: canoeing, kayaking, wind- surfing, stand-up paddle boarding, dinghy sailing; you can even go rafting on the River Liffey. Of course, with its lengthy coastal route, the Wild Atlantic Way is teeming with opportunities to venture into the waves. There are more obscure sports such as kite-surfing or land-yachting, and Ireland’s pugnacious coastline is ideal for the sport of canyoning – also known as gorge walking. This involves following a shoreline, stream or river and negotiating the many obstacles that get in your way, sometimes diving into water. It is a pastime for the very adventurous.

Even if you need a pocket calculator to keep your score, golf in Ireland more than compensates with its incomparable scenery and warm hospitality.

Royal Portrush hosted The 148th Open this year, the biggest international sporting event ever held in Northern Ireland, with golfers, spectators and aficionadas from every continent making the journey to the north coast of Co. Antrim.

The Dunluce Links course – where The 2019 Open took place – is considered one of the finest tests of golf anywhere. It was ranked fourth in the world by Golf World, while Golf Magazine rated it twelfth in their list of the Top 100 Courses in the World.

The island of Ireland can lay claim to one third of all the genuine links courses in the world – they’re dotted like diamonds in an emerald necklace along the coastline. Four courses – besides the Royal Portrush, Ballybunion, Royal County Down Portmarnock and Portstewart are all ranked inside the world’s top 50. Portstewart, with stunning views across to the Inishowen Peninsula, hosted the 2017 Dubai Duty Free Irish Open – the 90th anniversary of the inaugural tournament in 1927.

The Royal County Down, Newcastle, some 25 miles south of Belfast, was one of Tiger Woods’ favourite courses when he was dominating the sport. It’s also a regular haunt of Shane Lowry, Darren Clarke, Padraig Harrington and Rory McIlroy.
Ireland also has its fair share of parkland courses – quite different from links courses which always snake along the coast.

The K Club, Straffan, Co. Kildare, is Ireland’s best-known parkland course. Having staged the Ryder Cup in 2006, this is a club to be reckoned with. Two courses boast flawless greens and meticulous course maintenance. The Ryder Cup returns to Ireland in 2026, when the tournament will be hosted by the Adare Manor Golf Resort in Co. Limerick. Ireland’s golf courses can offer the most challenging of sporting tests. But they’re always set in the most spectacular of scenery, and inevitably come with every manner of luxury from spa to swimming pool.

So even if you can’t tell a putter from a mashie niblick, you’re likely to have a splendid time. 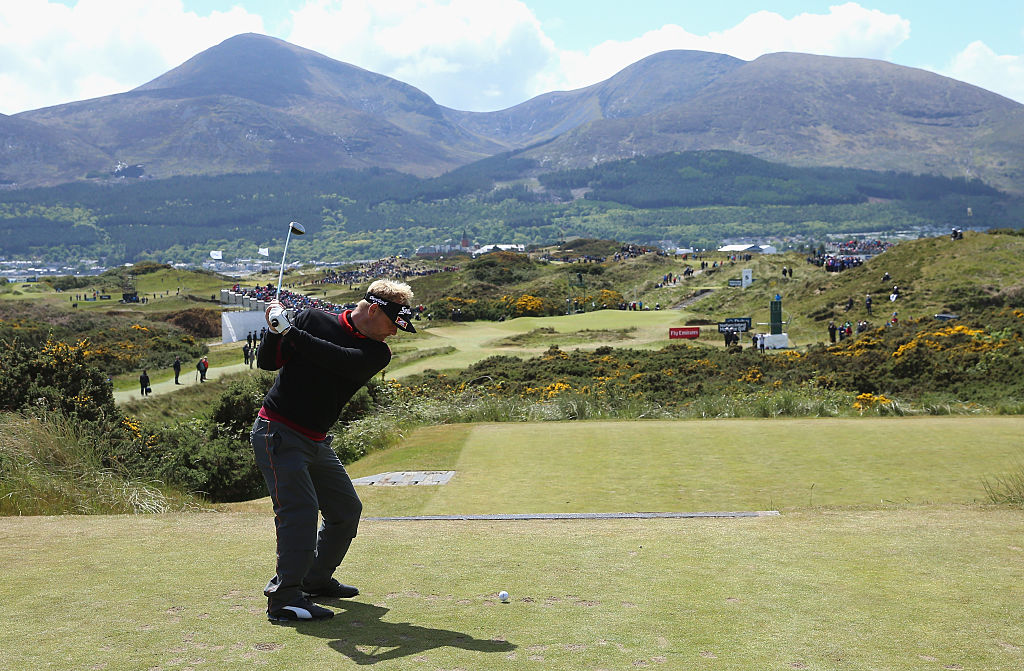 NEWCASTLE, NORTHERN IRELAND - MAY 31: Soren Kjeldsen of Denmark tees off on the 4th hole during the Final Round of the Dubai Duty Free Irish Open Hosted by the Rory Foundation at Royal County Down Golf Club on May 31, 2015 in Newcastle, Northern Ireland. (Photo by Andrew Redington/Getty Images)

Fishermen have long known about Ireland’s angling. Rivers, loughs and coastlines packed with fish will keep your lines tight – from the banks of the Royal Canal in Dublin to the wide waters of the Shannon- Erne system. Even if you’ve never fished before, you’ll be hooked.
Every year the world’s best anglers descend upon Ireland for the World Pairs Angling Championship, which takes place in counties Cavan, Leitrim and Fermanagh. With the next tournament due to take place in September 2020, you’ve plenty of time to plan your trip if you fancy catching some of the action.

Ireland’s pastures have produced some of the finest horses in the world — the limestone in the soil gives them light, strong bones.
You can test this for yourself in pony-trekking centres throughout the island – and there can be few better ways of seeing the island’s pastoral countryside.