JAMES JOYCE’S epic masterpiece, Ulysses was published in its entirety in 1922.

Joyce confided to painter, writer and social activist, Frank Budgen, an acquaintance in social circles in Zurich that he considered Ulysses (Odysseus) the only all-round character in literature.

An ordinary day – Bloom’s - is depicted focusing on his thoughts and encounters.

Comparisons between protagonists Odysseus and Bloom are drawn.

Joyce wanted his work to endure yet, at a low point, speculated as to whether the date June 16, 1904 would resonate in later years.

Conversely, what has become known as ‘Bloomsday’ commemorations are global.

They include dressing up as characters from the book in period clothes, a straw boater being a hallmark, eating Bloom’s breakfast of choice (grilled kidneys), gatherings for the presentation of extracts, songs, poetry and music and visits to places referenced. 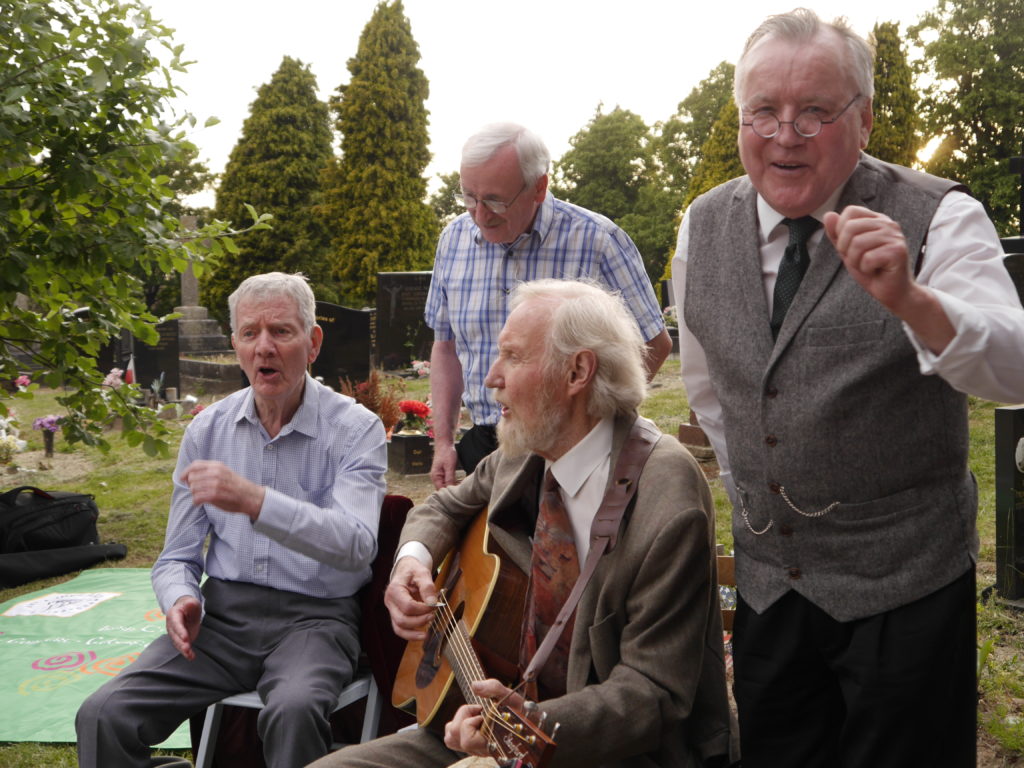 Paddy Kelly, Sean Cannon and Gerry Molumby in fine voice at the Bloomsday celebrations in Northampton

Many events this year were held online due to caution surrounding Covid-19.

However, it was possible to stage the 17th Bloomsday in Northampton – an outdoor event adhering to social distancing.

Why Northampton – a town in England’s East Midlands?

There is a sizeable Irish diaspora. Economic migrants settled to work in the shoe and boot-making industry for which the area is famous.

Others worked on the M1, M6 and the building of Milton Keynes.

Peter Mulligan relocated to the town. As a native of Dún Laoghaire it is apt that he initiated a Bloomsday ceremony at the grave of Lucia Joyce in the local Kingsthorpe Cemetery.

Lucia was the only daughter of Joyce and his wife, Nora Barnacle. Her father’s patron and literary executor of his will, Harriet Weaver, arranged for her to be admitted to St Andrew’s Hospital, a nearby facility where she spent the last thirty years of her life.

Annually, a group of Joycean aficionados join Peter to highlight the promise and creativity Lucia showed as a young woman – talented in her own right as a dancer and illustrator. 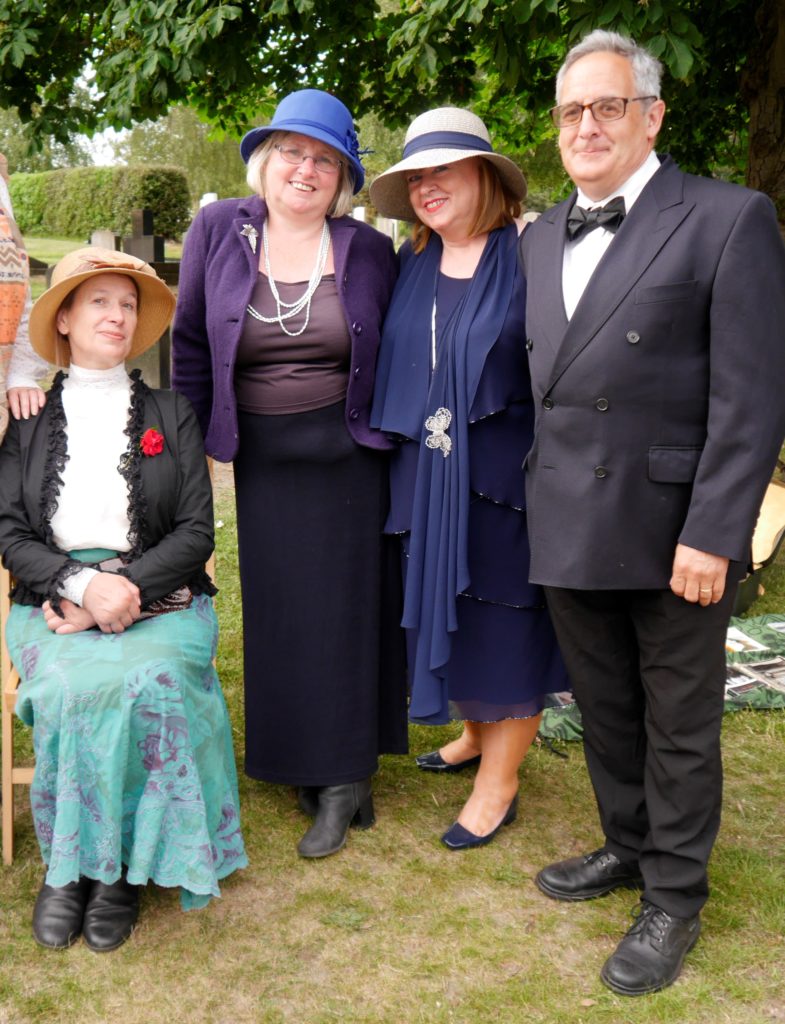 On June 16, 2021, Gerry Molumby, a native of Thurles, Tipperary, now based in Derbyshire, and founder of Triskellion Irish Theatre took on the mantle of James Joyce to give a witty, but also poignant insight into the life of the Joyce family.

Interspersed with the reading of a passage from Ulysses brought to life by his mastery of the Dublin accent, a rendition of ‘Oft in the Stilly Night’ (included in ‘Portrait of the Artist’ sung by Stephen Dedalus’s family) and a plethora of anecdotes, Gerry introduced other performers and speakers.

This year, James played the role of Frank Budgen alluding to his influence on Joyce.

Richard did justice to the legacy of Lucia before she was hospitalized, revealing that she was a trained, acclaimed avant-garde dancer in Paris and highly aspirational.

Critics and spectators recognised her merit. Her biographer, Carol Loeb Schloss was cited.

Deirdre is also passionate about working for Five Leaves Bookshop, Nottingham, winner of the prestigious Independent Bookshop of the Year Award, 2018.

Deirdre, as Nora Barnacle, gave an insight into her relationship with James and Lucia.

Locals starved of cultural experiences because of lockdown had heard about the event; as a result there were first-time attendees with no previous concept of Bloomsday. 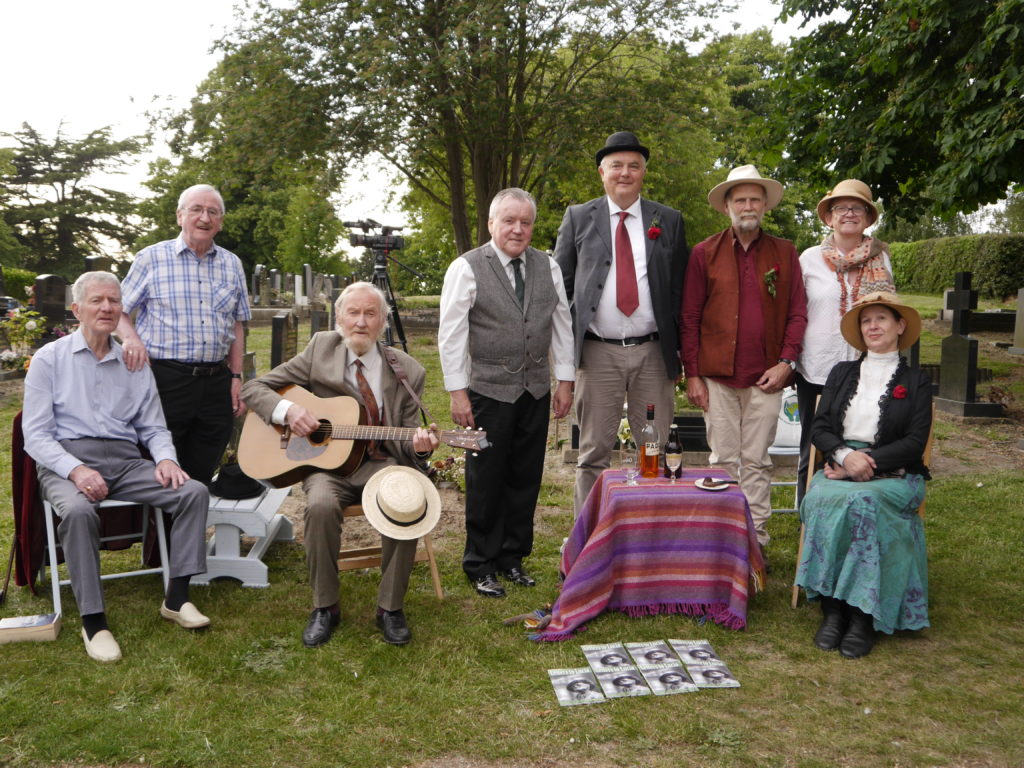 Transcending ethnicity, everyone knew the chorus to this classic, creating a great atmosphere; no surprise in the hands of the legendary entertainer, Sean, accompanied by Paddy Kelly, brother of Luke. Gerry Molumby concluded by inviting audience participation in an open mic session.

Chris Dalton stepped up, eloquently reciting by heart an excerpt from Joyce.

Letters to Lucia will be performed in 2022 at the graveside.