24 of the best Irish session songs

1. The Fields of Athenry - a classic balled by Dublin songwriter Pete St. John

2. The Rare Ould Times  - the story of a man who worked as a cooper in Guinness’ brewery all his life but was made redundant

3. The Ferryman  – a song about the last of the ferryboats working on the Liffey

5. The Mero  - The Mero was once a cinema in Dublin’s Mary Street

7. The Crack was Ninety

10. The Island - powerful and intelligent track by Paul Brady

11. The Town I Loved So Well - a Phil Coulter classic inspired by the Troubles in Northern Ireland 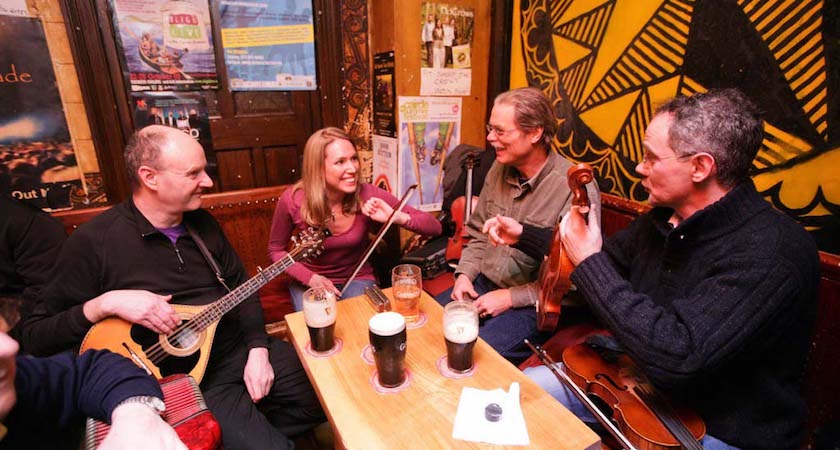 12. The Men Behind the Wire - by Paddy Joe McGuigan

14. Galway Girl - written by Steve Earle who was born in Virginia but grew up in Texas. He spent some time in Galway hanging out with local Irish musicians like Sharon Shannon and wrote the song that became a massive hit

15. The Green Fields of France  - an anti-war song written by Scottish songwriter Eric Bogle in 1975 – a year after the Birmingham and Guilford bombings and the resulting backlash against the Irish in Britain

16. The Red Rose Café – written by Dutch songwriter Pierre Kartner but also recorded by The Fureys and Davey Arthur

17. Dirty Old Town -  assumed to be a traditional Irish song but actually written by the legendary Ewan McColl about Salford in Greater Manchester

19. Whiskey in the Jar - got a new lease of life when Thin Lizzy rocked it up

20. The Irish Rover - brought up to date when The Dubliners and The Pogues joined forces

23. Spancil Hill  - usually assumed to be traditional but was actually written in the traditional style by Michael Considine and tells the story of an Irish immigrant living in California who dreams one night that he is back home in Spancil Hill, Co. Clare

24. Fairytale of New York – simply the best Christmas song ever