THE lilting baritone voice of Bing Crosby features once again this Christmas.

An album Bing at Christmas, with new orchestral arrangements, includes some of Bing's best-known songs transformed by their new setting.

Original recordings of the distinctive singer can now be heard over a lush contemporary soundtrack performed by the London Symphony Orchestra.

The album is a collaboration between Decca, Crosby’s longtime record label, and the Crosby family.

Bing at Christmas includes a revamped version of Bing’s most famous song White Christmas, as well as The Little Drummer Boy, recorded with David Bowie in September 1977, a month before Crosby died.

Alongside the album, the estate of Bing Crosby has released a series of moving letters sent from Bing Crosby to the families of young soldiers during World War II. 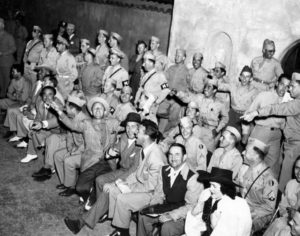 Included in the cache of correspondence are handwritten letters to Bing, from relatives of the soldiers, thanking him for bringing joy and a sense of hope to their sons, husbands and brothers who were serving overseas.

A collection of poignant photographs of Bing Crosby entertaining troops during World War II has also been released. These images show Bing giving shows at the front lines, singing to crowds of soldiers in England, France and Belgium, performing on outdoor makeshift stages, usually wearing army fatigues and a cap, and in hospitals, perched on the edge of wounded soldiers’ beds.

Robert S. Bader, Vice President of HLC Properties Ltd, the name of Bing Crosby’s estate, explained: “I’ve come to know and understand Bing a bit through archiving his correspondence, but I was simply overwhelmed when I found a box hidden in the attic of his home in Hillsborough, California.

“He kept these deeply personal letters in a safe place apart from everything else. The letters from the soldiers’ family members are often heartbreaking. These people felt such a deep connection to this man they only knew as a famous entertainer. And he lived up to their faith in him with equally heartfelt letters back to them.” 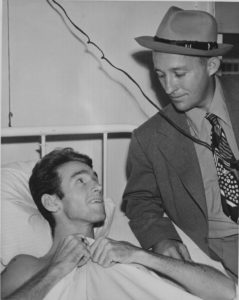 Bing Crosby was from an Irish American family — mother Kate Harrigan had family roots in Schull, Co. Cork. Bing himself was born in Tacoma, Washington state.

Although the singer had many hits across the decades — including Did Your Mother Come from Ireland penned by Tyrone man Jimmy Kennedy — White Christmas is his most famous recording.

He first performed the song on December 25, 1941 live on his NBC radio show The Kraft Music Hall. No recordings of the broadcast are believed to have survived.

But the song, the most significant hit of Bing Crosby’s career, was recorded again in 1942; thereafter it became the biggest selling single of all time.

Bing is the only artist to appear twice in the Top Ten Best-selling singles of all time — White Christmas is at no. 1, while his recording of Silent Night occupies the no. 4 spot.

Oddly enough, White Christmas initially performed poorly — and even Bing was lukewarm about the song to begin with. But by the end of October 1942 it was topping the US charts, and its appeal began to spread globally — not least because of World War II. English-speaking troops were comforted by the song’s nostalgic images of home “with every Christmas card I write” and "where the treetops glisten”.

The song is also something of a landmark in recording history — it showed that there could be commercially successful secular Christmas songs. 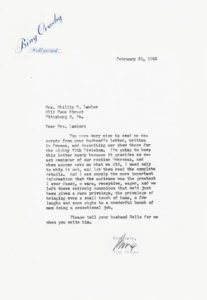 The version of White Christmas most often heard today is not the original 1942 Crosby recording, as the master disc became worn due to frequent use. Crosby re-recorded the track in 1947, accompanied by the Trotter Orchestra and the Darby Singers, the same backing groups as on the original version.

White Christmas was written by Irving Berlin, born Israel Isidore Baline in Russia. The son of a cantor in a Jewish synagogue, his first language was Yiddish.

In 1893 the family immigrated to America and settled in New York; the young Israel was five at the time, and didn’t speak English till he was nine.

Irving Berlin’s inspiration for the song had some Irish influence. His second wife (his first died on their honeymoon) was Ellin Mackay, from a New York Catholic  Irish family. In later life the composer told his biographer Lawrence Bergreen he had nostalgic memories of childhood Christmases on the Lower East Side, and especially of the Christmas celebrations of his neighbours, the O'Haras.

White Christmas went on to sell more than 50 million copies worldwide. More recently, it has achieved over 1.8 billion streams — with an average of 18 million streams on December 25 alone every year.

Bing Crosby remained dismissive of his role in the success of the song, subsequently saying that "a jackdaw with a cleft palate could have sung it successfully”.

However, he remains forever associated with I'm Dreaming of a White Christmas.

Bing at Christmas is a brand new album featuring some of the singer’s greatest hits — including White Christmas — and accompanied by the London Symphony Orchestra. It is currently  in the Top 10 of the UK Official Albums Chart — the first time the legendary singer has been back in the albums chart for over 40 years.