“A MAN does how he pleases with his own property,” is the unshakeable assertion of one Edwin Epps (Michael Fassbender) in Steve McQueen’s much-heralded 12 Years A Slave, a movie that will equally shock, appall and move its audience.

Epps’ principle might seem fair enough, by most standards, but as he’s a plantation slaveholder and the ‘property’ he refers to are actual people, his idea carries the mark of the deepest moral controversy.

Though this is the third collaboration between Fassbender and McQueen, 12 Years A Slave is a movie of a different stamp to their earlier efforts — Hunger (2008) and Shame (2012).

While Hunger dealt with the 1981 IRA hunger strikes and Shame with the perverting nature of sex addiction, both films depicted characters making choices that are voluntary, if deeply complex.

In contrast, 12 Years A Slave portrays characters caught up in conditions that are decidedly involuntary, and the narrative is broader in scope, casting and historical significance.

That said, there are also distinct similarities between this and McQueen’s first two films. McQueen is exceptionally expressive at showing the damage done to body, mind and soul by the circumstances his characters live with and how the worlds they inhabit end up inhabiting them, with profound pernicious effect — both morally and mentally.

Based on the 19th-century slave memoir of Solomon Northup, McQueen’s new movie offers a scorching illustration of the horrific world of what was termed America’s ‘Peculiar Institution’, a phrase that comes to seem like extravagant euphemism.

Chiwetel Ejiofor plays Northup, a freeman born in New York in 1808. Making his living as a violinist and entertainer, Northup has a wife and children and is established in sophisticated society.

But in 1841 he is tricked by two conmen, finding himself kidnapped and sold into slavery, an uncommon but very real experience for some antebellum free-born black Americans. 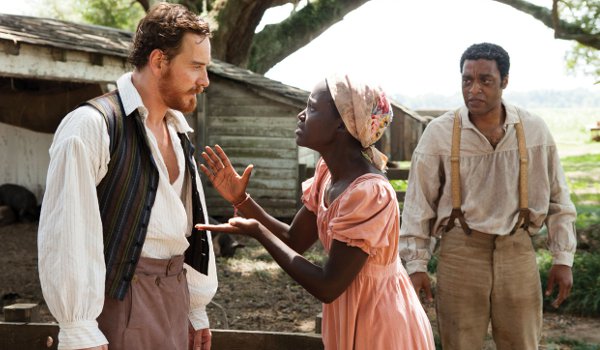 Northup passes through a number of hands, each exchange revealing the increasingly degrading stages of the trade in human flesh, ultimately falling into the “possession” of Edwin Epps in the Deep South of Louisiana.

It’s when Ejiofor and Fassbender come together on screen that the dramatic heart of the movie emerges. The tension between protagonist and antagonist is spellbinding and bone-tingling.

McQueen sets up his viewers as spectators of a deadly cat-and-mouse game between the two, where Epps, suspecting something odd about this particular slave, goads Northup and almost dares him to show insubordination.

Meanwhile Northup must curtail his own urges, even having to disguise his literacy — the written word and an educated slave being the most dangerous threat to the concept of slavery.

Every slave must step on eggshells around the erratic moods of their masters. In one agonising vignette, Northup is stretched from a bough with his neck in a noose, with his toes only just able to reach the ground for support.

As a visual metaphor for every slave’s precarious condition it’s both brutal and brilliant — one slip and you’re dead.

Epps treats his slaves with a kind of barbaric caprice. He uses the females for his sexual pleasure. He wakes them all in the middle of the night to dance and make merry. They’re not merely his chattels, they’re his playthings.

Ejiofor and Fassbender are slated for Oscar nominations for Best Actor and Best Supporting Actor, respectively. Only rare performances from others will better either man. If Ejiofor wins he’ll be only the fifth black actor to take the prize since the inaugural awards in 1927.

If McQueen wins for Best Director, he’ll be the first black director to do so. Whatever transpires, this year’s Academy Awards will see slavery as a main subject.

This follows on from 2013, when Spielberg’s Lincoln and Tarantino’s Django Unchained spotlighted one of American history’s most wounding legacies.

Despite its inherent drama, American cinema has mostly skirted slavery. In the 1950s, John Ford tried to raise cash for a biopic of Frederick Douglass but found no funding. One wary producer told Ford: “If you make a film about n*****s, only n*****s will pay to see it.”

When David O. Selznick made his epic Gone With the Wind (1939), Joseph Breen at the Hollywood Production Code Administration fretted upon the lusty embraces of Scarlett O’Hara and Rhett Butler, and over Butler’s earthy wording, ‘Frankly, my dear, I don’t give a damn,’ but the movie’s soft-toned portrait of slavery didn’t bother Breen one bit.

DW Griffith’s masterly, but morally suspect, Birth of a Nation (1915) effectively blamed the bloody rupture of the American Civil War on Abolitionist agitators and “uppity shines”, a view endorsed by President Woodrow Wilson.

Much later, Spielberg’s Amistad (1997) tried to redress the idealistic balance but simplistically showed the slaves as noble savages, rather than complex humans. Perhaps it was always going to take a black director to get the picture of slavery focussed correctly.

There’s fine support from Brad Pitt, Paul Dano, Paul Giamatti and Lupita Nyongo, among many others, but the film belongs to Ejiofor and Fassbender and their battle of moral wills. It’s sometimes too talkative, but it’s visually and emotionally compelling. Don’t miss.

12 Years A Slave is released in cinemas today

Michael Fassbender, 'Philomena' and U2 get Oscar nominations