"FILM locations in Ireland just take your breath away. I thought we had stunning scenery in the north of England but the southwest of Ireland was something else. I absolutely adored working there, it was such a wonderful time.”

Maxine Peake is in fine form as we chat.

The highly-acclaimed English actress is very much a woman in demand but recently made time after filming the BBC drama, Silk to talk about her experiences in Ireland working on her powerful new offering Run And Jump.

The film tells the story of an Irish family whose father (played by Edward MacLiam) has suffered a brain injury after a stroke.

His wife Venetia (Peake) is struggling to keep the family afloat when an American doctor (played by Will Forte) comes to observe his recovery. It had its Irish premiere at last month’s Galway Film Fleadh where it took the Best Film Award.

It was filmed in Co. Kerry and had the Oscar-nominated Steph Green as director. Peake says she was won over by the prospect of working in Ireland and admits to having been “blown away” by the script.

“The protagonist was a woman keeping the family together,” she said. “It was unsentimental and it felt real. I could identify with Venetia and the film had a real joy to it.

“On paper I guess it could have been depressing in other people’s hands, but what Steph Green did with it brought the joy out. Steph was really hands-on and it was a privilege to work with someone so passionate about a project. She had confidence in it from start to finish and that rubbed off on everyone.”

There can be no mistaking Peake’s northern English tones, so just how did she master the Irish accent for the role?

She continued: “I was worried about getting crucified over my accent, but we talked it through beforehand. We had a backstory for Venetia that she was born in Ireland and had moved to Manchester at a young age. Then when she met her husband she moved back home.

“So she slipped slightly into this Irish accent. The hybrid Irish accent fascinated me. It’s so contagious and beautiful that you can’t help but pick it up. You get the lilt and the tune, it’s infectious.

"Venetia was a bit of a loner, but came to Ireland and felt she really was back at home. I’m nervous about what Irish people will think when they hear my accent!” 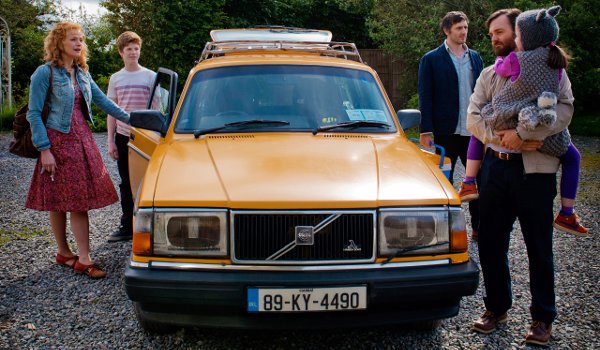 Maxine Peake stars in the new film 'Run and Jump', set in Ireland.

Peake’s onscreen husband was played by MacLiam, who she describes as “fantastic to be around”.

She added: “Edward was focused and dedicated, he was just lovely to work with. He took the film seriously, but not himself. The role he was playing meant that he had a very difficult task, but he got his head down and did it with no fuss. I was full of admiration for him.”

Peake says that the more time she spent around Irish people working on the film the more she realised that the Irish are “natural actors”.

She said: “There’s something about the Irish character that lends itself to acting, possibly more than anything else. It’s the history of storytelling, the language, it’s so rich. And there’s a whole lot of young talent coming through.

“Daniel Day-Lewis is just the tip of the iceberg. There is some amazing Irish talent coming through. The Irish have a definite gift. I often think anyone from Ireland could be an actor, it’s like a second nature.”

Her work on Run And Jump was her first proper experience of spending any length of time in Ireland and she is determined to get back soon.

“It was brilliant. To my shame, I had only ever been to Ireland once before for a friend’s wedding and that was my whole experience of Ireland. I absolutely loved it.

"I found than the Irish can talk even more than (English) Northerners! It was a real experience and I can see why people completely fall in love with the place. It’s magical and it’s mystical.”

Peake started her career with a minor role in Victoria Wood’s Dinner Ladies and then moved into more serious characters with Shameless before recent TV drama successes like Silk and the World War 1 period drama, The Village.

She didn’t get to work with Pauline McLynn in Shameless because she had left by the time McLynn arrived, something she regrets.

“Pauline is a fantastic actress and she was brilliant in Shameless. She has done some amazing things and of course ‘Mrs Doyle’ is one of the best characters in comedy ever!”

Peake was once described in an interview as “low maintenance” and it’s obvious this is a description she is proud of.

“Oh don’t get me wrong… I can stomp my feet when I need to! But I don’t know where this ‘dreaming actor’ type comes from. I was brought up to not make a fuss, not to show off and just to get on with it.

"But I think some actors can make a fuss. Acting is a fantastic job and it is essential. We need entertainment. It’s just about getting the job done, get in and get on with it. You are one cog in a big machine. I like the team aspect of it.”

So what career advice would she give any young person hoping to start out in the world of film and television?

“Ha! Maybe look at somebody else’s career and not mine! All I can say is that if you love it enough it will happen. Stick in there, by the skin of your teeth. It’s a game and it’s about staying power. It’s about being able to take it on the chin.

“It’s a business and yes there is an element of self-promotion to it, it is called showbusiness after all. But to youngsters I would say ‘hang on in there’. Take the creative criticism and throw everything else away.”