FOR a young actress making a name for herself by playing dark characters, Emma Eliza Regan radiates light and warmth.

The 26-year-old from County Galway is chatty, confident and has a steely determination.

She’s used to taking on tough roles and making them work and it looks like 2015 is going to be her best year yet.

The lauded Irish western Darkness On The Edge of Town saw her play the part of Cleo Callahan, a young girl out to avenge the murder of her estranged elder sister.

Filmed entirely in north Kerry, it gripped audiences at the prestigious Slamdance Film Festival in the US recently and has just been sold to a major distributor.

Next up she’s preparing for her first ever British lead role in a new psychological thriller called Nursery which begins shooting in London in April.

Landing the role of Cleo in Patrick Ryan’s film was a massive breakthrough, though it nearly didn’t happen.

“When I first read the script I was being considered for a different role, but I was very drawn to her,” she explains. “She is unique in cinema terms. Teenage girls are usually portrayed in very similar ways in a lot of films.

“Cleo was 17 and by herself in the world. At the start of the film her sister is killed and the audience instantly knows who did it so that strips away the ‘who did it’ from the outset. Cleo is a very brave and strong girl, her whole posture and stance... she’s a hard girl. I had to change myself in every way. She is quietly powerful, rather than loud. She can be violent in a very cold, calculated way.”

American critics who watched the film — made for a meagre €18,000 — were blown away by the performances and the plot, not to mention the stunning scenery of Ireland’s southwest. Regan loved the experience of going to the States to help push the film.

“It was a complete eye- opener and a great experience. It was our first screening outside Ireland and the response in Ireland had been so good. We knew people at the screenings in Ireland but the USA was a totally new audience.

“I think they were astonished by the beauty and landscape of Kerry and how it looks... beautiful and bleak and atmospheric. Most of the reviews have highlighted that. We did so much work on the setting; it lent itself to it perfectly.

“An Irish ‘western’ hadn’t been done in years. The landscape is such a contrast to the American landscape. The people of Kerry were so good to us, people were so helpful. They were very excited for us to be making our film in Kerry.”

The end result is a powerful film and the hope is that this distribution deal will see it get the pick-up it deserves. 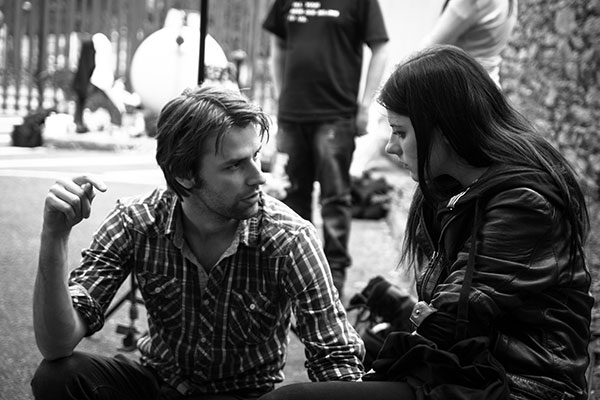 She adds: “It has done a few Irish festivals and it’s doing America for the next few months. It’s in Berlin right now and then it’s coming to theUK.It was sold to a distribution company in Berlin the other week and it got a really good response in Utah. Everyone from LA was there and there’s a real attraction to the Slamdance films, we had a lot of buzz going on about us — girls, guns, violence, Ireland... they loved it!”

Meanwhile, Nursery begins shooting outside London shortly and since she found out she had the job in June, Regan has been busy getting herself ready for what will be another demanding schedule.

“We’re shooting just outside London on this stunning big estate."

London has been Regan’s home for the last year and she says she is “really enjoying” life in the city.

As for her role as Sunny Black, it’s another dark and difficult part. “

I’m excited about it but there’s a lot of preparation. She’s self- destructive and her father dies at the start, so she inherits the family mansion. She comes back and lives there... the only occupant is her uncle who abused her when she was a child. It’s psychological. She believes that he is still controlling her. She’s another strong, damaged girl on a journey.”

Regan also writes in what spare time she can find and has pieced together a screenplay that she hopes to one day film in the Aran Islands.

“That’s what I’m really excited about. I started writing it in 2012 and it’s a coming-of-age story about a young girl who is the daughter of a film director.

She leaves home and comes to Ireland and goes on a road- trip with musicians, ends up on the Aran Islands and meets her grandparents.

“She finds out what her mother left behind, it’s sort of mystical. Everyone expects it to be quite dark because of me. She’s the kind of girl who had everything in life but was not happy. It’s about how she grows up. I’m from Galway too, so that’s why it means so much to me.”

Galway was granted UNESCO City of Film status last year, something that Regan hails as “amazing”.

“It’s so exciting for Galway, we have always had such a history of culture and reading and acting, now this puts us on the world stage. Hopefully a lot more productions will come in and shoot there. The title brings a new prestige to Galway because the film festival will get more and more high profile. It’s such a good location, that’s why so many influential people come to the Galway Film Fleadh.”

Regan has another film ready for the screen this month called Get Up And Go. It sees her working alongside Love/Hate duo Killian Scott and Peter Coonan and Regan describes it as “light- hearted”, which must have been a relief after the trauma of playing Cleo in Darkness On The Edge of Town.

“It’s about a gang of mates in Dublin in their 20s trying to figure out life. It follows their two characters, they’re trying to get their life together. I’m just a girl they meet; it’s a nice light-hearted film. It was good for me to do fun stuff. Usually I’m thrown into very dark material. I think it’s going to do well.”

With her career taking off, what advice would Regan offer to young actors out there hoping to get a break into the world of film? “Firstly, I would say be true to yourself. Educate yourself, read a lot of books and experience life. You have to be so focused and dedicated to being an actor. I’m always a bit wary if people tell me they want to be an actor. People who have lived their life make good actors.”

From the archive: 'I find Ireland an extraordinarily warm place to live' - Angela Lansbury