TODAY IS International Cat Day, a day dedicated to showering even more love and affection on our (usually uninterested) pet felines.

Irish people are cat lovers through and through—an example of which can be seen in this Irish woman’s adoption of a sick street kitten in Athens—but the only cats found in Ireland are the domesticated pets.

Or at least that’s what we’ve been told…

For years Ireland has been plagued with the odd unexplained sighting of big cats.

And when we say Big we don’t mean the neighbour’s cat Snowy is looking a bit overweight— some people are convinced they have seen panthers, leopards and pumas roaming around the Irish countryside.

Most recently, in 2018 there were several sightings of a mountain lion in areas around Cork—these sightings were coupled with increased livestock killings and less foxes around the area, and led to the Cork Society for the Prevention of Cruelty to Animals putting down traps and cameras near the places the big cat was spotted.

They didn’t catch anything.

In 2017 in Newry, there were more reports of big cat sightings, this one believed to be similar to ‘The Jungle Book’’s Bagheera.

The Police Service of Northern Ireland even posted a message urging people not to approach the animal, which they described as “a large black cat, possibly a panther”.

They didn’t find anything. 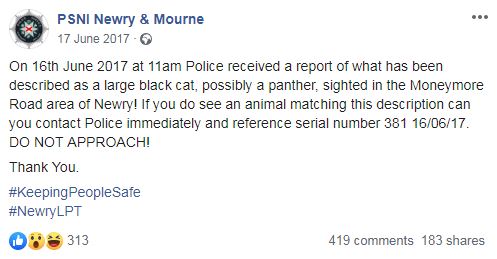 Over a decade earlier there was a black leopard seen stalking the countryside in County Leitrim, this occurrence reported by a man who had spent five years photographing wild big cats in African bush. It’s a shame he didn’t have his camera ready, because he never got a snap of the leopard.

And it was never found.

Another supposed sighting of a leopard-like creature was reported in the Knockmealdown Mountains in Munster, causing widespread fear and reports that Gardaí had told hikers to exercise extreme caution. In a confusing twist, the Gardaí then denied ever saying this.

And the big cat was never seen again.

2003 brought terror to County Monaghan when locals were convinced there was a panther prowling around a housing estate. These sightings, and several unexplained attacks on pets in the area, provoked a massive Garda search using helicopters to locate the beast.

This time they did find something.

A video captured by a farmer revealed… a regular domestic black cat.

Whether you think all these sightings were random hallucinations suffered by several people in the same area at the one time, or believe that the Emerald Isle truly does hide dangerous big cats among its green fields, the mystery of Ireland’s phantom beasts is more of a puzzle than the myriad of UFO sightings throughout the years.

Here’s to them on International Cat Day, whether the cats in question exist or not.