From footie to Flatley: Lord of the Dance James Keegan on being scouted by Manchester United

THERE aren’t many teenagers who can say they faced the kind of life-changing decision that James Keegan did.

Fresh-faced at the tender age of 15, the young Mancunian was travelling across the country to perform at numerous Irish dancing competitions, whilst juggling the demands of being an academy player at Blackburn Rovers and considering life as a professional footballer.

Scouted by Manchester United, all the while steadily making a name for himself in the Irish dancing sphere, the now 27-year-old lead in Michael Flatley’s Lord of the Dance: Dangerous Games encountered the dilemma of heading down two diverging roads, when he suffered a career-changing accident.

Whilst escaping the demands of his hectic schedule and hanging out with friends near his home in Fallowfield, Keegan, the son of parents who hail from Roscommon and Leitrim, endured the misfortune of breaking his leg whilst “jumping over a stream or something”, spelling disaster for his fast-progressing career. Modestly admitting that he was under no illusion that life as a footballer was a certain path; he believes that it was this incident that ultimately determined his future.

“I remember one week winning the World Championships and flying home and three days later I had a trial with Man United,” he recalls whilst on a break from Lord of the Dance rehearsals. “It was a mad one because as much as I loved the dancing, I loved the football and it was looking like I was going to have to make a decision,” he explains.

“The fact that it was there within my grasp, I had to give this a go, but I ended up breaking my leg. That put me out of action for about a year, so the football kind of fell away because of that then, as I wasn't contracted at the time. And that was it.

"When I came back I took them both up again and got back to quite a good level at the football but then by this stage I was almost 17 and Lord of the Dance came knocking and I just kind of jumped at the chance. Maybe I never would have made it in football, but definitely it [the accident] helped make my mind up because it was the choice I was left with.”

Shin pads, football boots and half-time whistles may seem a world away from dress shirts, waistcoats and dance shoes, but whilst dedicating himself to the two separate hobbies, and essentially leading two very separate lives as he journeyed into adulthood, Keegan concedes that the core principles of both disciplines were not too dissimilar.

“I definitely think that's what helped me be the dancer that I am without a doubt because I was juggling the two all the time,” he admits coyly, when I suggest that his dual interest must have perfected his footwork.

I curiously ask him whether banter at football practice ever verged onto bullying? After all the macho atmosphere of the changing rooms must be a tough place to explain a local newspaper story showcasing his most recent dancing triumph. He responds, unsurprised by my question, but in a manner that suggests he had struck a level of maturity way beyond his years in dealing with the ‘banter’ at an early age.

“I was lucky enough in school,” he insists. “I'm sure boys that dance now probably get a little bit of stick, but that's what definitely helped me a lot, being into football so much. Nobody could poke fun at me because I'd be on the football field on a Saturday morning and playing well. But definitely with other teams and especially if something had been in the newspaper or on the television you'd have a name.

"The football scene is the same as any kind of sporting scene, everybody knew everybody and so I even had it from other managers. They'd poke fun from the side line, like, ‘you ballerina' or some kind of snide comment, which is just crazy to look back on because you'd be like 12, 13 or 14 at this stage. But it never bothered me, I was lucky enough to have friends around me that understood and it was fine.”

When questioned whether he would ever have done anything differently in his career, he confesses that it’s a thought that’s crossed his mind on occasion, but one that he doesn’t dwell on, as he counts himself privileged to be enjoying such a successful career on stage. “Sometimes you think God what if, or what could have happened, but I've made it here now and I've had an amazing 10 years so I can't really complain,” he adds. 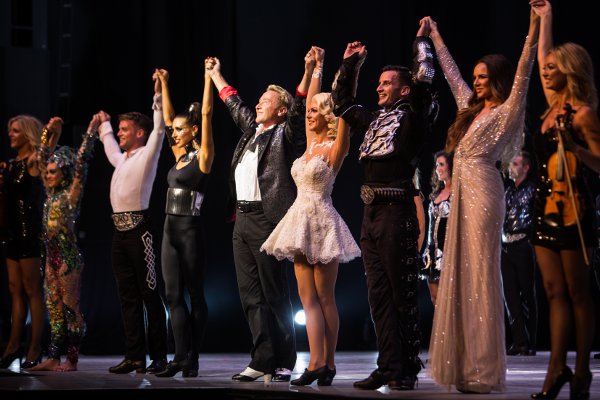 From his first day in an Irish dancing class, it’s always been something of a family affair. He recalls that he was only four years old when he was sent along with the youngest of his four older sisters, Louise, to a lesson.

It’s hard to believe that he would have ever resisted the chance to perform after witnessing the presence and energy with which he currently commands the stage at the London Palladium, but the Manchester-Irish dancer admits that he was reluctant to do so at first, even “kicking and screaming”, before eventually being put off dancing for months.

“It was one of them things really I just fell into it. I didn't like it at first,” he explains. “My mum must have softened up a bit and I didn't go back for about six months. I can't really remember but I went back and in that time I took to it. And off course once you see your first medal or first trophy that helped a bit to keep me in it, and it just went from there. I was lucky enough to do really well at competitions and progressed from there.”

And progress he did. In 2004, at the age of 17, Keegan established himself as the youngest ever lead in the history of Lord of the Dance. He had only been invited to join the production the previous year. During his teenage years he won all of the major titles in Irish dance, culminating in 2000 when he completed the ‘Grand Slam’ by winning every title in the same year.

Reflecting on his numerous achievements, he pinpoints winning the World Championships as his stand out feat, and adds that the current West End run of the Lord of the Dance is “one of the highlights” of his glittering career.

“The one that always stands out is winning the World Championships when I was competing. It's the one everyone wants, it's the highest you can go so definitely winning that would stick out in my mind,” Keegan said. “The other one is, opening here on the West End. I can't really think of anything that would top that. I've done some amazing shows in some arenas a lot bigger than the Palladium, such as Wembley Arena, but it's something about it being the West End and in London, it's got such a reputation and is such a prestigious gig to do that it's probably up there with my best.”

It may seem premature to mention whilst he’s in the prime of his career, but thanks to his sister Louise’s Keegan Academy of Irish Dancing in his hometown, he admits with great pride that one day, when he hangs up his dancing shoes, he’ll be able to pass on his wealth of expertise to a new generation of promising young dancers.

With his entire family, including his parents and elder siblings, regularly congregating at the dance centre on weekends, he happily adds that attending classes is also an excuse to spend quality time together.

“I'm heavily involved with it. Whenever I'm home I'm straight into the class and teaching away. In between tours I'm there every day.  When I leave this one day, it is up and running and I can go straight into it, so it's doing really well. There are lots of little kids there and it's just a really good environment already. It's got a really good feel to it, especially on Saturday mornings. It's almost like a family day, you've got that many people in and out so it's great. Louise is great for organising and for family days and Christmas parties and all that stuff so it's really good.

“My mum sorts shoes out for everybody and the socks and she sees people in and out. My dad comes and puts down floors and that kind of thing. My three other sisters live in different parts of Manchester, and we're always saying it's great because it brings us together a couple of times a week.”

With such a strong Irish connection and upbringing, I have one final question to ask the second-generation Irishman. “Do you feel more Irish or English?”

And without a moment of hesitation, he confidently reflects on the deep connection to his roots. He says, finally, “I've had Irish parents, Irish food, Irish hobbies, everything about my life was kind of Irish apart from being born and raised in England,” before he heads back to rehearsals and the Lord of the Dance.

Lord of the Dance leads Mayo Day fun in Manchester