MATT GROENING has suggested that a follow-up to The Simpsons Movie could soon be in the works.

It’s been 12 years since we saw Springfield covered by a giant dome, Homer fall in love with a spider-pig and Arnold Schwarzerneggar become President - for some reason. (Hey, crazier things have happened in politics, right?)

Now, the Simpsons creator has admitted that there will likely be another film-length saga for the residents of 742 Evergreen Terrace to entangle themselves in. 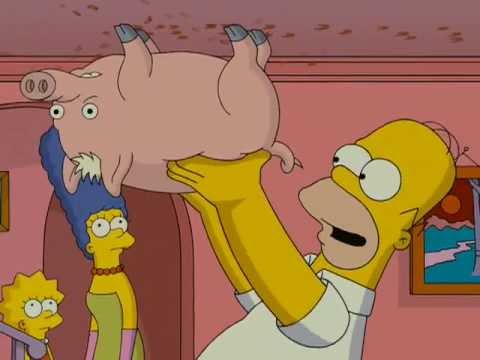 Speaking at Comic-Con, Groening said he felt optimistic that a sequel to The Simpsons Movie was on its way.

“No doubt there will be another Simpsons movie one of these days. I think Disney wants something for its money,” he said.

Groening went on to say that writing and animating the movie in 2007 had utterly worn out his staff, as they were stretched to the brink working on the movie as well as continuing with the TV-series.

“This is a true answer. The first Simpsons Movie almost killed us. We didn’t have a B-team waiting to do The Simpsons Movie, so the same people who wrote, animated, voiced and did the music for The Simpsons TV show also did the movie. That was in 2007. We’re almost recovered, almost.”

The Simpsons Movie was generally received positively by audiences, but Groening and co. have failed to scale the heights their groundbreaking show reached back in the 1990s. Y'know, when The Simpsons was cool.

A Simpsons Movie sequel could be round the corner

The very fact that The Simpsons is still running and is now on its 30th (yes thirtieth) season, suggests that money might be the main drive for the team than literary and comedic excellence at this point.

If the money’s there, I’m sure a second Simpsons Movie won’t be far behind.

Hopefully this time though, they stay in Springfield and interact with some of the characters a little more, rather than buggering off to Alaska to make friends with eskimos and motorcycle salesmen.

Remember when that eskimo shot Mr Burns? No, me neither.

IN PICTURES: Bill Murray, Niall Horan and Jamie Dornan among those taking part on day one of JP McManus Pro-Am