THE MOST famous news fail to ever happen in Ireland has been immortalised forever, as a plaque has appeared at the site where, 10 years ago, a man slipped on some ice.

On January the 8th, 2010, RTÉ News did a segment on the 'Big Freeze' that caused roads to be shut, public transport to be cancelled, and schools to remain closed after the Christmas holidays --those of us in school at the time will always thank the Big Freeze for that.

Most importantly though, the snow and ice made people fall over. A lot. (In the words of the RTÉ presenter-- "It's still dangerous for Dublin pedestrians".)

In the news segment, the RTÉ camera caught a man making a TREMENDOUS fall on the ice, and despite the segment not being live, the news kept it in.

If you've never seen the iconic clip before, you can watch it below in all its icy glory.

Now a plaque has been established where it happened in honour of the man who gave the nation of Ireland so many laughs over the past decade.

The plaque has been erected by Coors Light, whose Senior Brand Manager Conor McIntyre said:

“There are a few key moments on Irish television that are memorable enough to talk about again and again. We felt this deserved a resurgence. 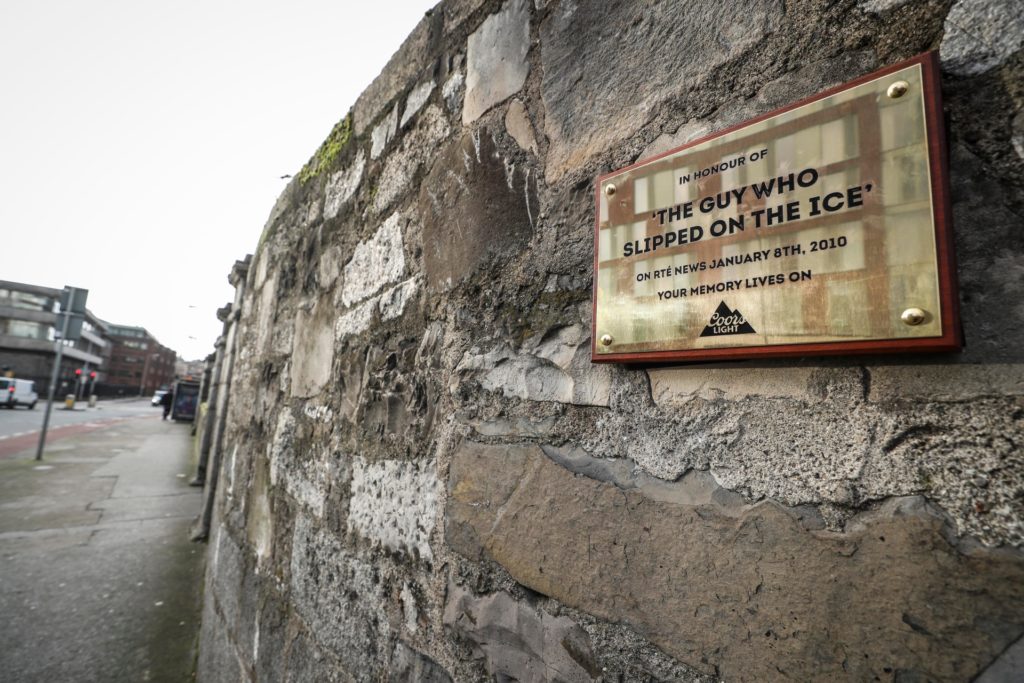 "We’ve recently completed The Rockies Awards, rewarding victories in life, big and small and we thought this lad definitely deserved some recognition for making it on to RTÉ News, ten years ago!”

The plaque, which reads "In honour of 'The guy who slipped on the ice' on RTÉ News January 8th 2010, your memory lives on', can be found on Church Street near the Four Courts in Dublin City Centre.

Although the man has never been identified, we hope he'll be happy with this tribute!