IN 2008 Ireland was forever changed by the sudden collapse of its economy.

Now sometimes dismissed as a bad episode in the long series of our history, it can be easy to overlook the residue of its impact.

From home repossession to untreated illnesses, the fall from prosperity manifested in a number of nasty physical symptoms.

But it also injured something that can’t quite be contained - our sense of self-worth.

After years of rooting our value in our financial success, we were left frantically wondering, ‘Who are we now?’

Flights,​ John O’Donovan’s latest play, seeks to explore the consequences of this reverence of money.

Using the analogy of a human bereavement to highlight the mass emigration out of Ireland, the award-winning playwright calls us to look closely at the long-lasting effects of the crash on our national psychology.

Twelve years ago, the abrupt regression from riches to rags plunged the country into a crippling identity crisis.

After gulping down a small fortune’s worth of over-priced frappuccinos, the bitter taste of instant coffee came as an assault to our palate.

Money was loved in the boom, when we had it.

It then became coveted in the crash, when we didn’t.

The recession didn’t break our love affair with money - it just inflamed our passion for it.

We may have sobered up from the high of the noughties, but the toxins remain in our bloodstream.

The addiction to wealth has been implanted in our constitution, permanently rewiring our brain chemistry. The empathy which once lived in the frontal lobe of Ireland’s skull was evicted and replaced with a slightly less amicable tenant - greed.

And it is this greed that has plagued our nation, spewing a scourge of issues, from widespread homelessness to large scale emigration.

Those who can’t generate money are relegated to the bottom rung of society, branded as useless and unimportant.

Simply put, the ‘being’ of ‘human’ has been replaced with the much more profitable descriptor - ‘doing’. 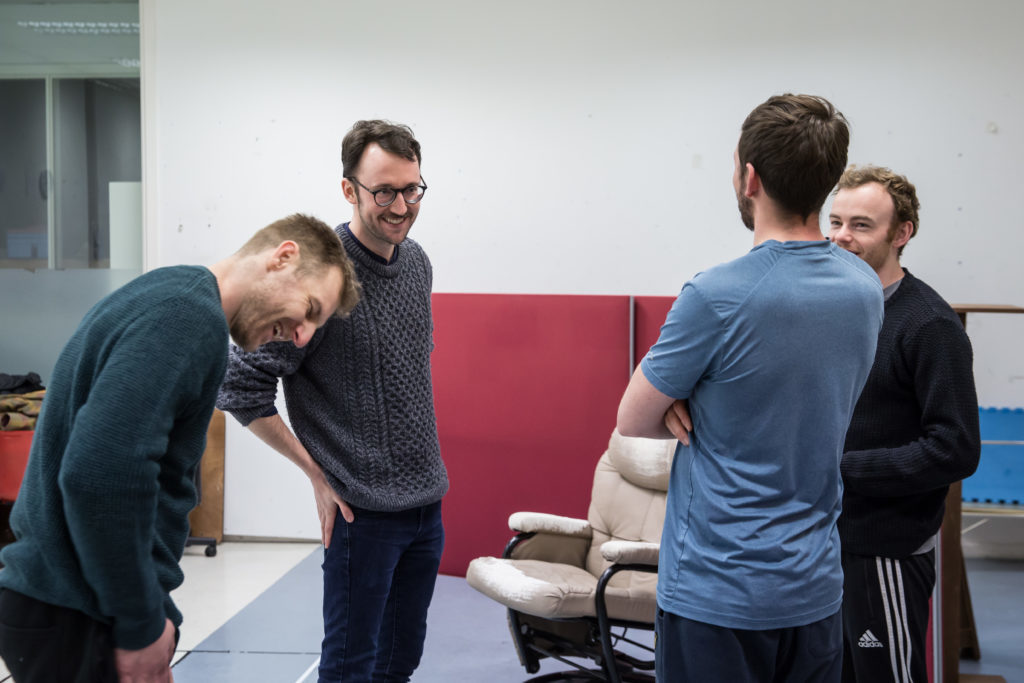 Writer John O'Donovan and the cast of Flights in rehearsals

The characters of ​Flights​ embody the disillusionment bred by this sentiment.

Set on the eve of their deceased friend’s anniversary, Barry, Cusack and Pa gather in rural Ireland for their yearly tribute to his life and to their shared memories.

However, it may be the final instalment of this long-held tradition.

As O’Donovan explains: “The anniversaries used to be more popular and now it seems like these three are the last to gather. You get the sense it will be the last evening they get together for different reasons in their individual lives.”

The dialogue of the living characters is interjected by monologues of the late Liam in what O’Donovan describes as a “state of a nation play crossed with a ghost story”.

So, what is the state of our nation?

Having roared for so long, Ireland’s swollen vocal chords were ruptured in 2008 and the nation was left spluttering to survive the shipwreck.

O’Donovan, along with countless others, was forced to abandon the country in search of a better quality of life.

“I bought a one-way ticket to just see what would happen. After not being able to get a job in a shop in Clare, I found work in London.”

While Ireland has steadily recovered from this economic drought, O’Donovan believes it continues to suffer the effects of its devastation.

“We accepted this idea that people are commodities - that they’re only valuable insofar as they’re economically valuable,” he explajns.

The weight of financial insecurity warped our psyche, conditioning us to measure everything by the tape of commercial worth.

Whether we had it or not, the last two decades unfolded to the recurring tune of Abba’s ​Money, Money, Money​ -​ and it doesn’t seem this record has any plans to stop.

This poisonous message trickles through the veins of society, dictating every decision we make.

The sinister idea lingers on - money won’t make you happy, but it will certainly make you worthy.

Flights ​seeks to expose the holes in this belief, challenging its audience to re-evaluate our disordered hierarchy of values. O’Donovan’s characters confront us with the perils of capitalism, revealing how easily our gluttony can wreak hunger.

All three men feel let down by their country and are now faced with the daunting prospect of an unknown future.

The financial climate of Ireland has chained them into corners, stifling their independence and puncturing their dreams.

And yet, in the midst of this mourning, hope prevails.

Against the dark backdrop of destitution, the spirits of these men flicker warmly.

The theme of death does not frighten them into drooping their heads and discarding their humour.

Instead, it serves as a springboard for banter and chat, inviting them to dive back into the memories of their past. 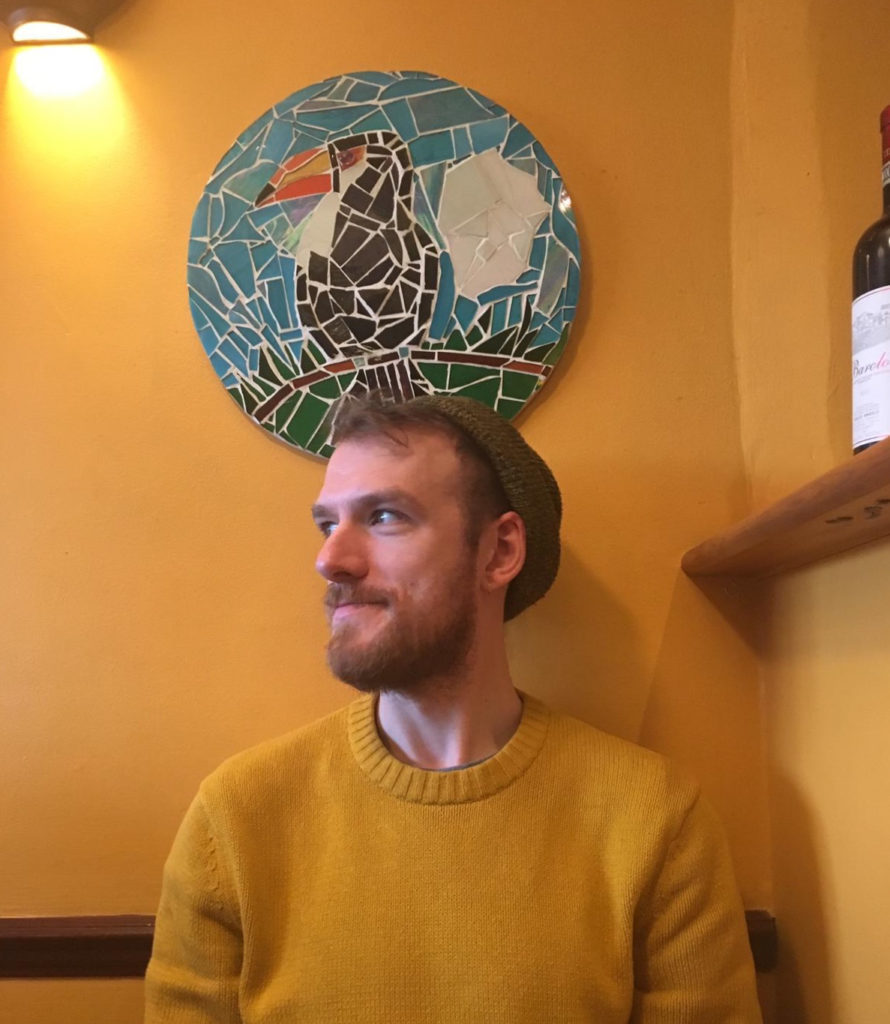 O’Donovan believes this attitude towards death is much more commonly found in Ireland than the UK.

“I think we’re more comfortable talking about death here, which means you find it easier to joke about,” he says.

It is this annual meeting with their deceased friend that prompts them to appreciate him when he was alive.

O’Donovan inverts mortality to awaken his characters, rather than to deflate them.

Death, ironically, is the energy that fuels this bond - bringing them together to reflect on their loved ones, both absent and present.

And that’s exactly what the play​ c​elebrates - relationships, the intangible currency that can survive even the harshest recession.

The story of ​Flights n​udges our consumerist ideals out of the way to show us that our value does not lie in the digits of our payslips or the accolades of our C.V.s.

It is, in fact, entrenched in our humanity - our empathy, our humour, our kindness.

And even from the most barren of terrains, its seeds continue to sprout - showing that, no matter how hard times get, it’s not going anywhere.

Flights by John O’Donovan is at the Project Arts Centre, Dublin from January 21 to February 8 before moving to the Omnibus Theatre in London from February 11 to February 29.