WATCH: Laywer on video court session forced to confirm he is not a cat after trouble with filter

A US court mishap has gone viral overnight after a lawyer was forced to confirm he was not a cat and was, in fact, human.

In the second chaotic Zoom meeting to go viral in less than a week (That's right-- the Handforth Parish Council meeting happened just five days ago), a District Court case in Texas fell into disarray when a lawyer experienced trouble with a video filter.

In the video, which was uploaded to Youtube before exploding into viral status on Twitter, a virtual courtroom session began in an awkward way when the sitting judge told one of the lawyers present "I believe you have a filter turned on..."

The lawyer, Rod Ponton-- in the form of a sad looking kitten-- sounds distressed when he replies "I don't know how to remove it, I've got my assistant here trying. But I'm prepared to go forward with [the case]. 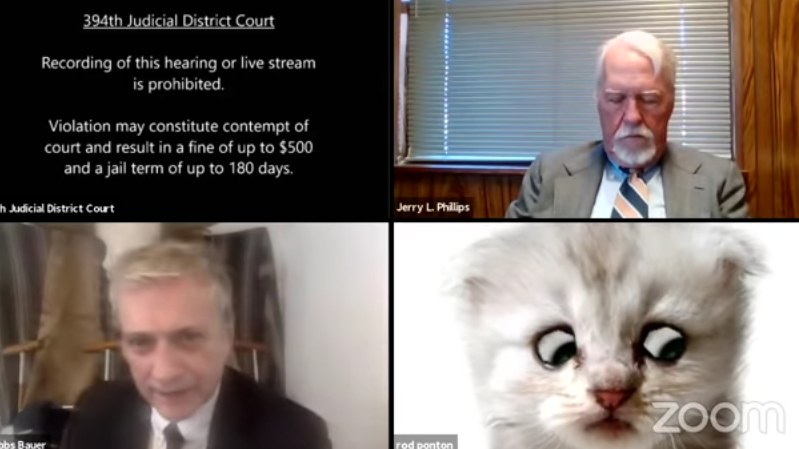 The video was uploaded by the Texas District Court itself-- possibly after deciding that the opportunity to share the hilarious meeting took priority over the statement--visible in the video-- that capturing a video of the stream is prohibited.

Lawyer Mr Ponton later appeared on BBC Breakfast where he explained the situation, saying he was shocked at the response but had accepted his newfound viral fame.

He was using his secretary's computer to join the stream, and only once the court was in session did he realise that "everybody's face popped up except mine.

You can watch the hilarious clip below.

Twitter users show off their animals with #MyPetIn5Words trend, results are wholesome as heck