THIS IS one trip to the Zoo that won't be forgotten.

Today is World Orangutan Day, an international celebration of one of the world's most intelligent primates.

The critically endangered species are native to the rainforests of Indonesia and Malaysia, but are now found only in parts of Borneo and Sumatra, with only around 60,000 of the creatures left in the wild.

Many captive orangutans can be found in Zoos and wildlife parks across the globe-- including in Ireland's Dublin Zoo.

The Zoo provides funding to the Orangutan Foundation for their work in Lamandau Wildlife Reserve, home to over 500 wild orangutans, and also takes part in a European breeding programme for Bornean orangutans to try and stop the creatures becoming extinct.

Orangutans are so intelligent that they often copy human behaviour-- as seen recently in an Indonesian zoo where one of the great apes gently picked up and wore a pair of sunglasses which had been dropped into its enclosure.

A similar incident-- sort of-- recently took place in Dublin Zoo, and we at The Irish Post thought there'd be no better time to share it than on World Orangutan Day, even though the orangutan in this story could be seen as a villain-- at least in one child's eyes.

A now-viral clip uploaded to video hosting social media site TikTok by Irish woman @lauz_7 showed her trip to Dublin Zoo that day, where she visited the orangutan enclosure.

In the video, the Irish woman explains that a child had dropped their teddy into the enclosure, where it had landed in the water and appeared to be lost forever-- until a seemingly helpful orangutan came to help. 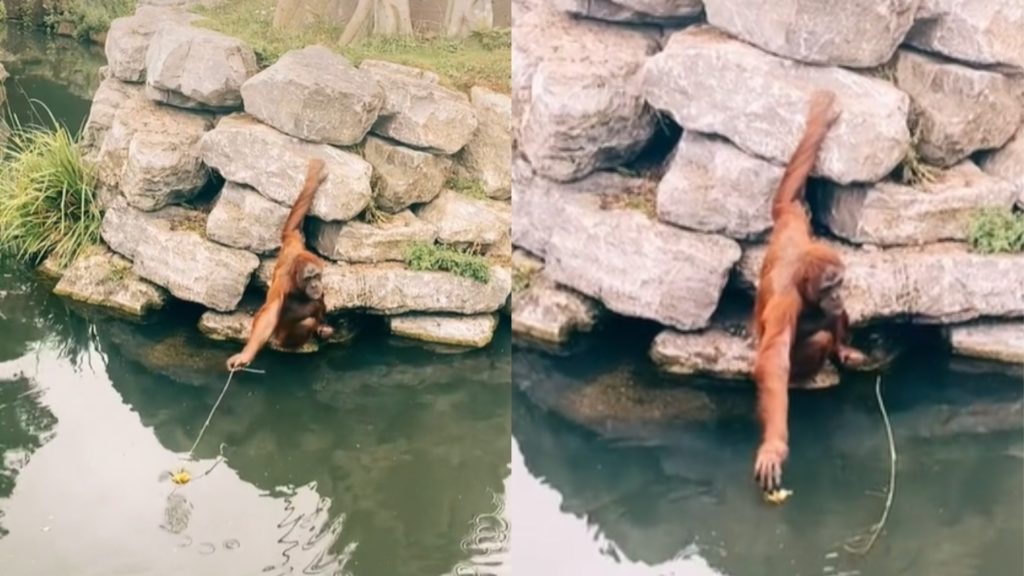 The intelligent creature used a long piece of grass to draw the teddy towards it, and the gathered crowd wondered aloud if the great ape was rescuing the child's teddy to return it to them.

The excitement grew as the orangutan managed to get hold of the teddy and appeared to give it a kiss-- before climbing the large tree in the enclosure, towards the crowd, with the TikTok user writing in the video 'Everyone thought it was going to give it to the child'.

As the orangutan climbs on wires directly overhead, people in the crowd begin begging, "Drop  it, drop it!".

And, technically, the orangutan does-- except it drops it piece by piece, as it has begun ripping the poor teddy apart, "dropping the fluff down on top of the crying child".